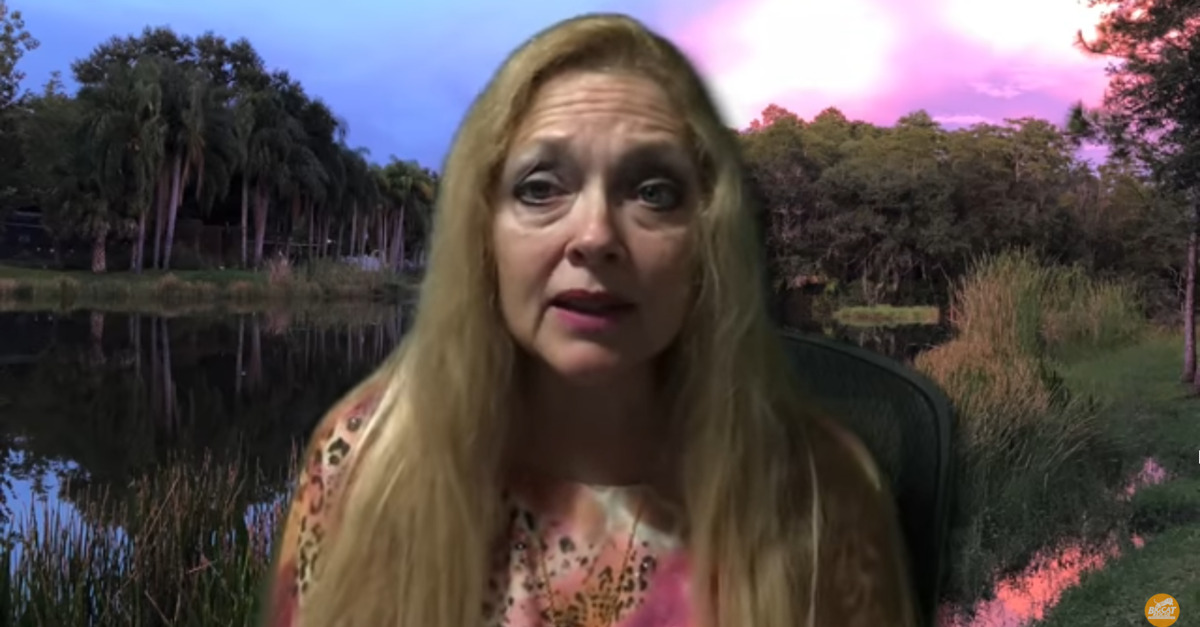 Carole Baskin, the lead protagonist in the hit Netflix series Tiger King, despite the memes and allegations made by her rivals, has repeatedly denied having fed her ex-husband, millionaire gadfly and businessman Don Lewis, to her own tigers or some other cats at Big Cat Rescue. But she has also refused to take a polygraph (a.k.a lie detector) test.

“The last dealings that we had were back in 2011,” Chronister said of the principal investigation into Lewis’s mysterious disappearance and now-presumed–and legally-adjudicated–death. “We did offer Carole an opportunity to take a polygraph.”

Straight, no chaser. The sheriff did not mince words:

Everyone else has agreed. And she declined. She said that her attorney told her it wouldn’t vindicate her of anything. So, she declined to be interviewed.

Chronister was responding to a question as to whether there were any significant updates–aside from the slew of new leads prompted by the massive viewership of Tiger King–on the case. The sheriff said there were not but took the opportunity to discuss some of the various ways the original inquiry into Lewis’s whereabouts was frustrated.

“It almost seems like our investigators, at every turn, encountered another obstacle,” Chronister said. “I’ll give you an example: he had two security guards. Both of them at the front gate of his property. They interviewed them separately. You have one saying, ‘I haven’t seen him in six months.’ You have another saying, ‘I saw him last week.’ And these are two people, two individuals that work closely together. So, an extremely convoluted case.”

The sheriff also hinted that Lewis himself was no angel:

The technical status of the case into the missing businessman is that it’s cold. But the success of the show has prompted a newfound focus and diversion of staff to field possible leads.

“The case remains open,” Chronister said. “We never close a cold case. What we will do is assign detectives and supervisors to other, higher priority cases, where we’re actively pursuing leads that are coming in.”

“What I’ve done in this case, because of all the leads that are being generated because of the phenomenon that’s been on Netflix, is ask that a detective supervisor be assigned to handle all the leads coming in,” the sheriff continued.

And there has been a marked increase in leads and calls since Tiger King originally aired.

“I think the great thing about this that’s come out is everyone’s home,” Chronister said, to muted laughter from some of the press. “They’re watching Netflix which means they’re home. Which means they’re being safe. But we’ve got an increased number of leads. Over the last four or five days, we’ve had six on average. None credible yet. A lot of theories coming in on who they believe committed this homicide.”

As for the best-case scenario? Sheriff Chronister reiterated his hopes that the intense national focus on the once-forgotten case elicits some classic criminal backstabbing.

“If you’ve seen the series, because of the competition between the people that had the different cat rescues, there was a lot of question and theories about who was loyal,” he said. “And was someone really there as a spy? These individuals constantly had to prove their allegiance to the owner of the different rescues. So, what we’re hoping is even someone has had a change of heart. Maybe a relationship status has changed. Anything that might help us solve this case.”

Baskin, for her part, posted a lengthy statement on her website addressing the allegations and calling them lies.

Joe Maldonado-Passage, the Tiger King himself more widely known as Joe Exotic, was sentenced in Jan. 2020 to 22 years behind bars in the murder-for-hire plot against Baskin, and for illegal animal trafficking and animal abuse.