Feds to Apple: If You Don’t Decrypt, We’ll Seize Your Source Code 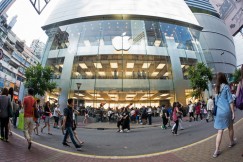 The U.S. Department of Justice appears to have made a surreptitious threat towards Apple in the footnote of a legal motion submitted to the U.S. District Court for the Central District of California. The footnote went relatively unnoticed until an Apple-oriented blog, iDownloadBlog, spotted the chilling language.

Decker, on behalf of the government, filed the “government’s reply in support of motion to compel and opposition to Apple Inc.’s motion to vacate order.” If that feels circular, it is. So, here’s what happened. The federal government filed a motion to compel, which in lay terms asks the court to order a party to take some action—here, that order would be for Apple to take the action of unlocking Farook’s iPhone 5C. Apple responded with an opposition to the government’s motion to compel. The most recent filing is like the colloquial equivalent of having the last word—a rebuttal to the rebuttal.

When we covered the government’s rebuttal to the rebuttal last week, LawNewz.com focused on the acerbic, if not accusatory, words of the government and their belief that Apple’s stance was “corrosive of the very institutions that are best able to safeguard our liberty and our rights” and, further, that Apple “deliberately raised technological barriers” to prevent the execution of a warrant, essentially inferring that the company is playing to the media in an attempt to protect its brand.

Now, thanks to sleuthing of iDownloadBlog, it’s come to our attention that the government tucked away the menacing words in footnote nine, page 22 of the Department of Justice’s filing.

For the reasons discussed above, the FBI cannot itself modify the software on Farook’s iPhone without access to the source code and Apple’s private electronic signature. The government did not seek to compel Apple to turn those over because it believed such a request would be less palatable to Apple. If Apple would prefer that course, however, that may provide an alternative that requires less labor by Apple programmers (emphasis added).

The language certainly cuts with the tone of a threat—sounds like a childhood “we can do this the easy way, or we can do this the hard way” ultimatum—and appears to infer that the government has no qualms about attempting to seize Apple’s proprietary iOS source code in an effort to compel compliance with their original court order. With Apple’s source code, the government can effectively create an operating system for its exclusive use—think of it as “GovtOS.” This government-centric operating system would strip out Apple’s encryption-based security features and allow the government to bypass Apple’s security software. The tech behemoth has publicly reproached the federal government’s pursuit of a government-only backdoor.

Barack Obama’s remarks on encryption and phone privacy at South By Southwest in Austin this past Friday. “If it was technologically possible to make an impenetrable device where there’s no door at all, then how do we apprehend the child pornographer? How do we disrupt a terrorist plot? How do we even do a simple thing like tax enforcement?” Obama posed. “If government can’t get in, then everyone’s walking around with a Swiss bank account in their pocket. There has to be some concession to get into that information somewhere.”