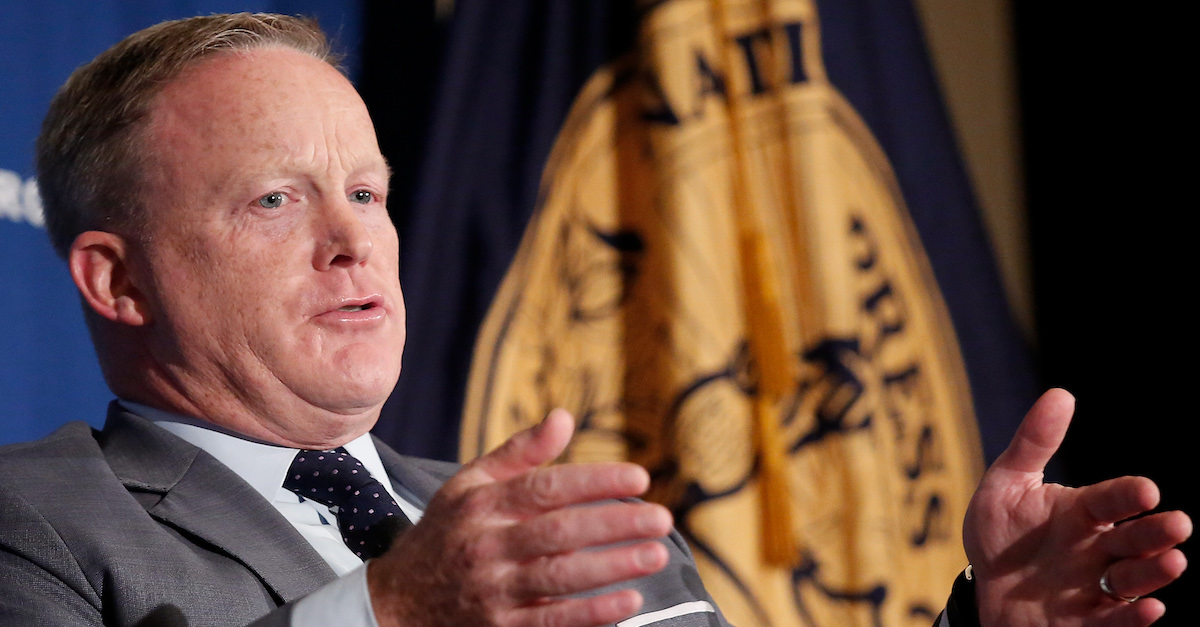 Sean Spicer is seen promoting his new book with the National Press Club on August 13, 2018 in Washington, DC. (Photo by Win McNamee/Getty Images.)

Spicer and former Director of the Office of Management and Budget Russell Vought had sued Biden and other administration members in September of last year, demanding that they be reinstated to the Board of Visitors for the United States Naval Academy.

The Board of Visitors, created pursuant to a federal statute, is an advisory board whose members issue annual reports to the president as to “the state of morale and discipline, the curriculum, instruction, physical equipment, fiscal affairs, academic methods, and other matters relating to the [Naval] Academy that the Board decides to consider.”

Its members consist of military officials, lawmakers, and “six persons designated by the president.” According to the statute, each of those six designees is to serve a three-year term.

In September of 2021, nearly 10 months after taking office, Biden asked for both men to resign, advising them that if they did not, their positions on the board would be “terminated.”

Jen Psaki, the White House press secretary at the time, said that Biden’s objective was to ensure that he had “nominees and people serving on these boards who are qualified to serve on them and who are aligned with [his] values,” according to a Politico report.

Spicer and Vought filed a lawsuit demanding that they be allowed to stay on the board, saying that Biden didn’t have the authority to terminate their positions. They requested an injunction “preventing this unlawful removal,” according to court documents.

In December of 2021, U.S. District Judge Dabney Friedrich, a Trump nominee, denied this request, finding that Spicer and Vought had not presented a case that was likely to succeed on the merits.

“The power of removal from office is incident to the power of appointment,” Friedrich wrote at the time, citing Supreme Court precedent holding that “absent a specific provision to the contrary,” if a statute allows a president to appoint someone to an advisory position, the president also has the power to remove that person.

Friedrich also said that the public interest would not likely be served by allowing Spicer and Vought to remain on the board at that time. Noting that Spicer and Vought had argued that their removal from the board would “silence dissenting views,” Friedrich pointed out that the defendants had given “no indication that their views on the governance of the Naval Academy actually differ from the other Board members.'”

“Nor do they explain how it would serve the public interest to present advice to the President — the primary function of the Board — that the President does not intend to consider,” Friedrich added.

Friedrich also ruled in December that because the board members are executive officials, barring their removal by the chief executive would raise “serious constitutional concerns.”

After Spicer’s injunction request was denied, Biden moved to dismiss the case. Spicer’s opposition to that motion failed to change Friedrich’s mind.

“The plaintiffs’ new arguments on the merits do not persuade,” the judge wrote.

“[T]he Court explained that interpreting [the federal statute] to insulate the plaintiffs from removal would raise serious constitutional issues, as Board members are executive officials whose ‘only role . . . is to advise the President on the performance of a quintessentially executive function'” Friedrich wrote Tuesday, citing her earlier injunction ruling.

Spicer had agued that the statute included language that required appointees to stay on the board for the duration of their terms. Friedrich disagreed, saying that the mandatory language applied only to those whose term of office had expired.

Friedrich also called Spicer’s argument that her ruling denying the injunction encompassed members of Congress who sit on the board a “red herring.”

Friedrich ultimately found that Spicer had “failed to state a claim for which relief can be granted,” and dismissed the case with prejudice.”

Lawyers for Spicer did not immediately response to Law&Crime’s request for comment.