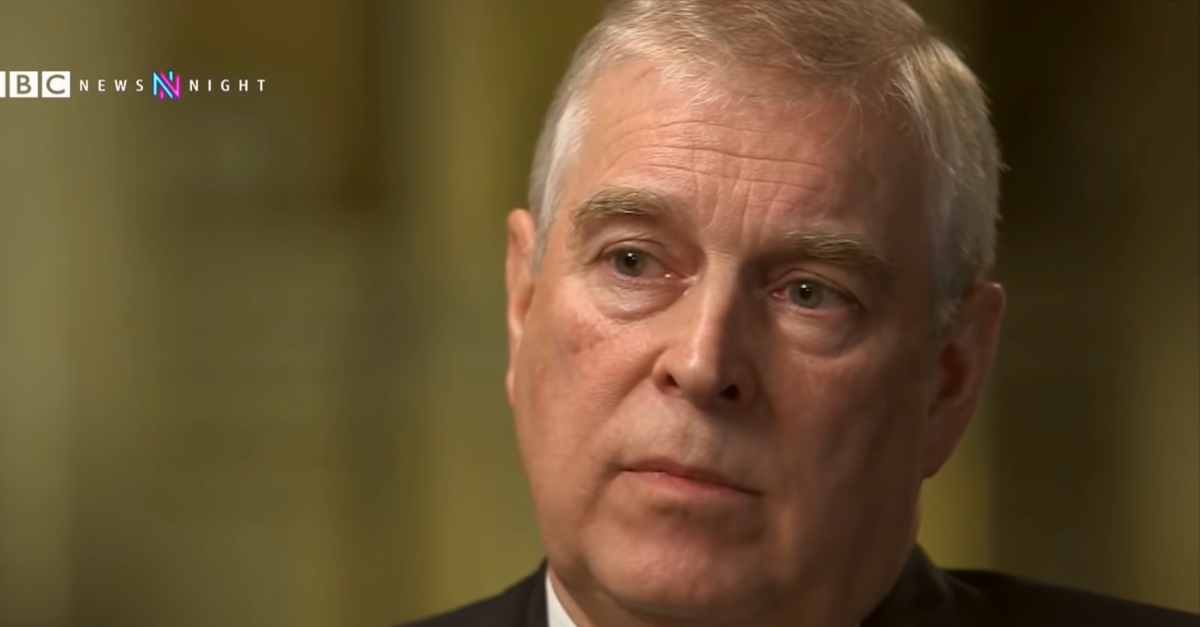 Prince Andrew cannot pause discovery in a lawsuit alleging he sexually abused a 17-year-old girl until he can glean more information about whether the case belongs in a U.S. federal court, a judge ruled on Friday.

The Duke of York had wanted to grill his accuser Virginia Giuffre about where she lives, including through a “two-hour remote deposition limited to the issue of her domicile.” Giuffre claims that the prince sexually abused her in three locations: Jeffrey Epstein’s New York mansion and private island in the U.S. Virgin Islands, as well as in now-convicted sex trafficker Ghislaine Maxwell’s London home.

Before addressing the merits of her claims, prince’s lawyer Andrew B. Brettler argued, U.S. District Judge Lewis Kaplan must determine whether the lawsuit belongs in his courtroom. On Tuesday, Brettler asked to pause the evidence-sharing process until his legal team has “limited jurisdictional discovery,” including by deposing Giuffre.

“Notwithstanding that, in her Complaint, Ms. Giuffre alleges she is a citizen of the State of Colorado, the evidence demonstrates that she is actually domiciled in Australia, where she has lived for all but two of the past nineteen years,” the prince’s motion stated.

Giuffre’s attorney David Boies said that the prince’s motion was unnecessary. Boies asserted that his client, whose previous lawsuit against Maxwell helped spark her criminal prosecution, already agreed to sit for a deposition and respond to the prince’s discovery requests and said there was no need to delay the lawsuit until the already-established deadline.

“Among other relevant points, it appears that the defendant previously served on the plaintiff extensive discovery, including at least one comprehensive request for documents relating to her domicile, to which responses are due, and have been promised, by January 14,” Kaplan’s ruling states.

The court will hear Prince Andrew’s motion to dismiss Giuffre’s complaint on Jan. 4.

One day before that upcoming hearing, the court is set to unseal a 2009 settlement agreement between Epstein and Giuffre, which the prince’s legal team argues immunizes him from civil litigation. Prince Andrew’s motion to dismiss claims the deal explicitly shield “royalty” from civil liability related to Epstein. The royal’s attorneys also argue that Giuffre was above the age of consent in New York and attack the constitutionality of the state’s Child Victims Act, which temporarily lifted the statute of limitations on cases involving allegations of sexual abuse against minors. The statute expired shortly after Giuffre filed her lawsuit.

On the merits, Prince Andrew’s motion to dismiss paints Giuffre as more of a participant in Epstein’s sex trafficking operation than a victim.

“It is a striking feature of this case that while lurid allegations are made against Prince Andrew by Giuffre, the only party to this claim whose conduct has involved the willful recruitment and trafficking of young girls for sexual abuse is Giuffre herself, including while she was an adult,” the motion states.

In an interview with BBC Newsnight, Prince Andrew claimed to have a medical inability to sweat, in order to deny how Giuffre once described him. Giuffre’s legal team made clear that they want to investigate that claim.

“If Prince Andrew truly has no documents concerning his communications with Maxwell or Epstein, his travel to Florida, New York, or various locations in London, his alleged medical inability to sweat, or anything that would support the alibis he gave during his BBC interview, then continuing with discovery will not be burdensome to him at all,” Boies wrote.

Boies and Brettler did not immediately respond to Law&Crime’s emails requesting comment.