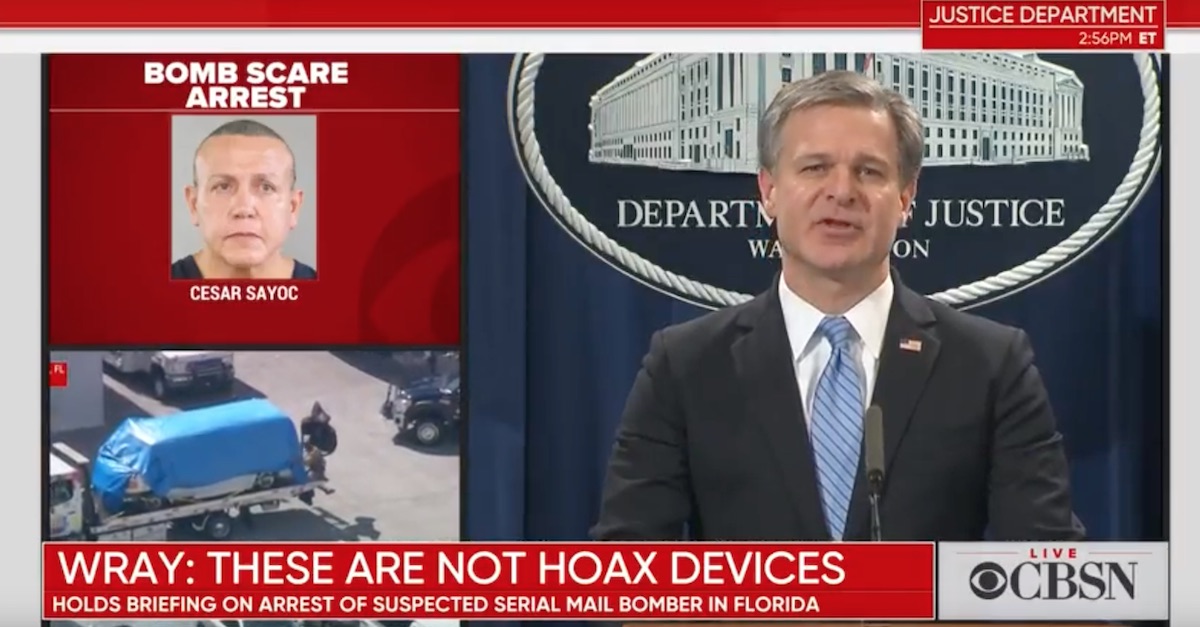 I want to focus for a moment on the amazing work of the folks at our FBI Lab. Based on their initial analysis, they uncovered a latent fingerprint from one of the envelopes containing an IED that had been sent to Congresswoman Maxine Waters. We have confirmed this fingerprint is that of Cesar Sayoc. There is also a possible DNA connection between samples collected from pieces of two different IEDs, mailed in separate envelopes, and a sample previously collected from Sayoc in connection with an earlier arrest in Florida.

Wray then compared the timeliness of the FBI Lab technicians to that of law enforcement agents “on TV shows and in Hollywood” before divulging the outlines of the apparent response timeline.

“Late last night, we also turned to our partners in the Florida Department of Law Enforcement for confirmation of this DNA connection,” Wray noted.

Funny how lowly rated CNN, and others, can criticize me at will, even blaming me for the current spate of Bombs and ridiculously comparing this to September 11th and the Oklahoma City bombing, yet when I criticize them they go wild and scream, “it’s just not Presidential!”

Republicans are doing so well in early voting, and at the polls, and now this “Bomb” stuff happens and the momentum greatly slows – news not talking politics. Very unfortunate, what is going on. Republicans, go out and vote!

Trump’s second tweet was widely interpreted as an apparent “false flag” allegation–the idea that some unknown group or individual had intentionally sent the IEDs in an effort to distract from political news. There is no evidence to support such an allegation and the president has not since repeated the claim.

Multiple media figures, however, took note of the apparent implication.

The bombs were real, FBI says after President Trump used quote marks around the word “bombs” as if to fan the baseless false-flag conspiracy theory https://t.co/9g6sGZddJu

The NYT raises the crucial question of whether Trump knew about the mail bomb suspect and his political leanings when he dismissed the bombs as a false flag operation:https://t.co/yEb3dECXEk pic.twitter.com/VcWfOzgnue

Sayoc, a registered Republican with a long criminal record, was taken into custody at an AutoZone in Plantation, Florida, just outside Fort Lauderdale. A witness, Bill Ferris, who pulled into the store’s parking lot around 10:40 a.m., saw FBI agents waiting with rifles. Deciding it wasn’t safe to be there, Ferris pulled out, just as the agents struck.

When questioned about President Trump’s knowledge of the alleged bomber’s identity and political leanings, however, the White House demurred.

Aides also refused to say whether Trump had been briefed on the arrest before or after his 10:19 a.m. tweet in which he suggested doubts about the attempted bombs.