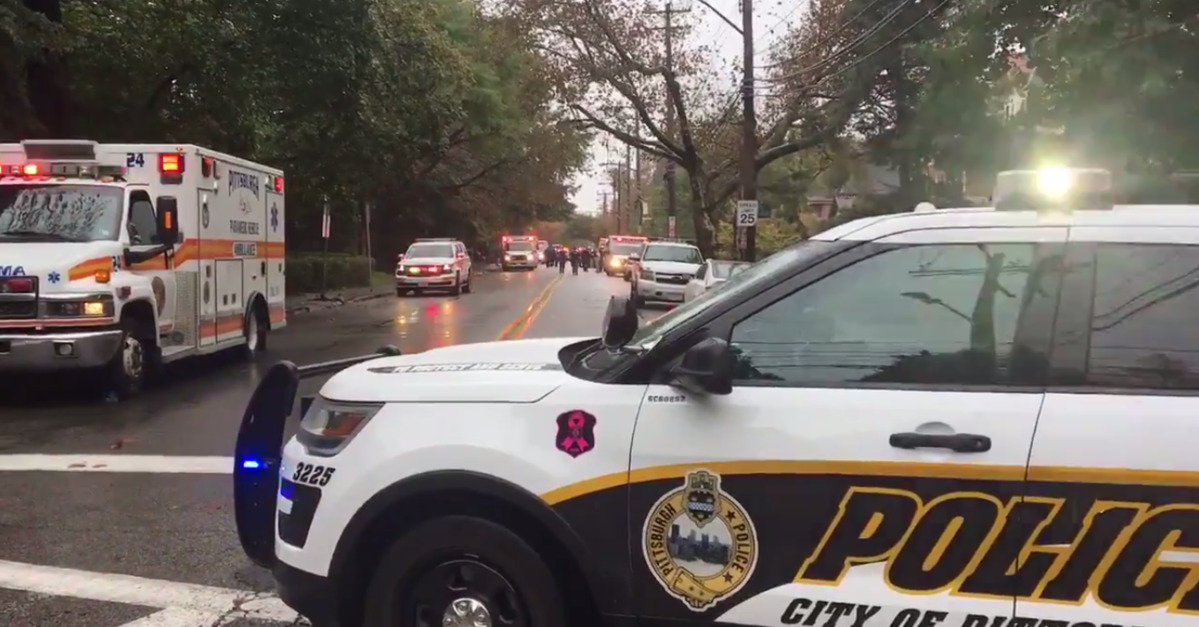 Social media posts attributed to Bowers single out HIAS, a Jewish refugee agency founded as the Hebrew Immigrant Aid Society in 1881. The organization formed as a response to a series of anti-Semitic pogroms in the pre-Soviet Russian Empire. HIAS has recently directed its resources to aid refugees and immigrants of all backgrounds–without regard for religion or nationality–and calls on its members to “repair the world.”

Bowers was reportedly an active user on the social networking site Gab–a self-styled “free speech” website which has effectively become a right-wing alternative to Twitter. Gab is a well-known online hangout for the alt-right, neo-Nazis, white nationalists and various other reactionary tendencies.

In the past week, Bowers appears to have shared Gab posts complaining about the “3rd world caravan” and “the sight of massive human caravans of young men from Honduras and El Salvador invading America thru our unsecured southern border.”

HIAS likes to bring invaders in that kill our people.
I can’t sit by and watch my people get slaughtered.
Screw your optics, I’m going in.

Another post attributed to Bowers from October 10, 2017 is also directed at the pro-refugee group.

“Why hello there HIAS!” the user identified as Bowers posted. “You like to bring in hostile invaders to dwell among us? We appreciate the list of friends you have provided.” This post also contained a link to HIAS’ National Refugee Shabbat, an event meant to highlight the current global refugee crisis and support refugees.

Conservative movement media has recently taken up the idea that George Soros, a prominent Jewish billionaire and philanthropist, is actively funding the relatively small group of refugees currently making its way through Mexico in order to legally apply for asylum in the United States.

This conspiracy theory is not confined to the far-right fringe, however, and has also been endorsed by multiple members of the GOP and the national leader of the Republican Party.

3. The idea that George Soros (symbol for many on right of Jewish conspiracy) is behind Caravan isn’t confined to Nazis. Here’s Congressman Matt Gaetz https://t.co/TbdoRvI7TG

The suspect also appeared to suggest, baselessly, that Jews were behind or connected to the caravan. Some on the right, including Rep. Matt Gaetz, have spread a baseless theory that Soros was giving caravan participants money. (Trump then reposted the video Gaetz posted.)

Critics called Trump out for spreading the theory at the time.

Trump’s lies about Soros funding the caravan are a further mainstreaming of an alt-right conspiracy theory: Jewish financiers are scheming to replace you with brown people 1/ https://t.co/spalnV5F7R

A sitting Congressman floated on Fox News that “perhaps Soros” is funding the migrant caravan, Trump’s No. 1 boogeyman heading into midterms.

Here that story is on Breitbart yesterday, which calls Soros a “globalist billionaire” on first reference. pic.twitter.com/44LsocFv4Y

Now, with multiple people dead and wounded, critics are wondering if such rhetoric will be dialed back.

Trump’s “campaign-style rally” in Southern Illinois is being reconsidered by the White House, MSNBC reports. How could he get though a rally without yelling “Soros! Lock them up! Globalists! Enemies of the State! I’m a Nationalist! The Caravan!”

Even for this one day?

Law&Crime reached out to Gaetz and Gohmert for comment on this story but no response was forthcoming at the time of publication.

Editor’s note: this article has been amended to note that two Republican members of Congress have recently endorsed the George Soros theory regarding the “migrant caravan.”