The Legal Reason Rep. Mark Meadows Is Resigning from Congress 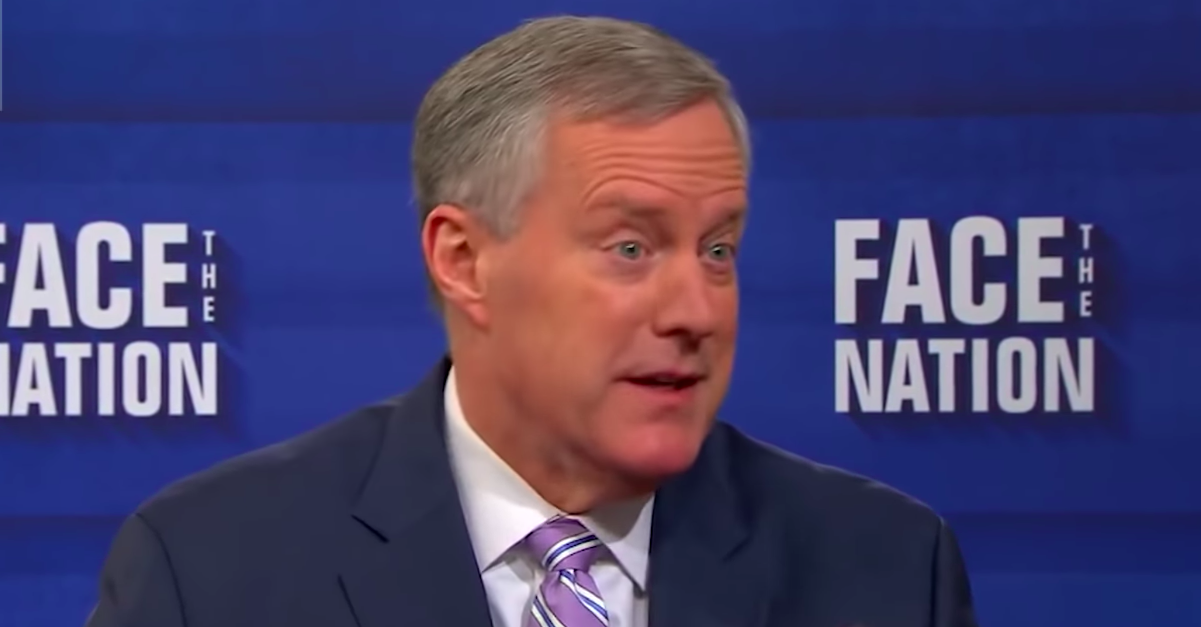 President Donald Trump announced earlier in March that Rep. Mark Meadows (R-N.C.) would be joining his cabinet, replacing Mick Mulvaney to become the president’s fourth chief of staff since taking office just over three years ago. Mulvaney was director of the Office of Management and Budget (OMB) at the time Trump named him acting chief of staff. Unlike Mulvaney, though, Meadows cannot officially begin serving the president until he resigns from Congress.

The crucial difference between Mulvaney and Meadows holding other positions while serving as Trump’s chief of staff is that Mulvaney’s OMB role also fell under the authority of the executive branch, while Meadow’s role in the House falls under the legislative branch. Essentially, separation of powers dictates that a person cannot simultaneously hold office in two of the three branches of government.

As former Director of the U.S. Office of Government Ethics Walter Shaub pointed out, Meadows cannot assume the duties of Trump’s chief of staff until he forfeits his membership in the House of Representatives.

“The Constitution prohibits [Meadows] holding both positions. Article 1, Sec. 6, to be specific. Upon his appointment to the White House position, he forfeited his position as a member of Congress,” Shaub wrote.

The Constitution prohibits him holding both positions. Article 1, Sec. 6, to be specific. Upon his appointment to the White House position, he forfeited his position as a member of Congress. https://t.co/obyYvHlT3V

Article 1, Section 6 of the Constitution states, in part:

“No Senator or Representative shall, during the Time for which he was elected, be appointed to any civil Office under the Authority of the United States which shall have been created, or the Emoluments whereof shall have been increased during such time; and no Person holding any Office under the United States, shall be a Member of either House during his Continuance in Office.” (emphasis added)

George Washington University law professor Jonathan Turley told Law&Crime that straddling positions in both the executive and legislative branches is barred by the Constitution.

“Serving as both an executive and legislative officer runs against both the language and the spirit of the Constitution,” Turley wrote in an email. “Article 1 expressly bars any Senator or Representative from being appointed to such an executive office.”

Turley said that even Meadows’s hypothetical resignation from the House may not make the appointment entirely constitutional.

“While this can be ratified with a formal resignation from the Congress, Section 6 does state that no Senator or Representative shall be appointed ‘during the Time for which he was elected,'” Turley wrote. “Taken at its express language, this would seem to bar appointment for the period of the elected office regardless of resignation.  This would resolve part of the redundancy since it would create a bar on the period and not just the simultaneous service.  However, I have not seen a judicial interpretation adopting such broad meaning.  The thrust of the provision is clearly to avoid simultaneous service.”

University of Iowa law professor Andy Grewal disagreed. He noted that the job of a president’s chief of staff may not fall under the constitutional definition of a federal office.

“A similar issue arose in considering whether Kushner or Ivanka Trump were subject to the foreign emoluments clause,” he added.

It should be noted that the Trump and Obama administrations both listed the position of chief of staff as a cabinet-level position under the Executive Branch on the White House websites.

Lisa Desjardins of PBS on Tuesday reported that Mulvaney has not in fact left his role as “acting” chief of staff, and Meadows will be taking over at the end of the month–after he resigns from Congress.

A LITTLE NEWS HERE: RepMarkMeadows is NOT WH chief of staff of any kind yet, he just told me.

He is now simply “a member of Congress”.

Meadows says he will resign to become chief of staff, “toward the end of this month”.