Dead pedophile Jeffrey Epstein’s former girlfriend and alleged partner-in-crime was arrested on Thursday morning in New Hampshire. Now we know why. According to the indictment out of the Southern District of New York, Ghislaine Maxwell faces six federal charges related to the “sexual exploitation of and abuse of multiple minor girls by Jeffrey Epstein.”

The indictment was signed by Acting U.S. Attorney Audrey Strauss, Geoffrey Berman’s replacement in the Southern District of New York. Under Berman’s leadership in July 2019, the SDNY hit Epstein with sex trafficking charges. Epstein died by suicide in Aug. 2o19. Here’s what you need to know about the newly released charges against Maxwell.

According to federal prosecutors, Maxwell “assisted, facilitated, and contributed to Jeffrey Epstein’s abuse, by among other things, helping Epstein to recruit, groom, and ultimately abuse victims known to MAXWELL and Epstein.” The victims were people Epstein and Maxwell both knew were minors and who were as young as 14 years old, the documents state.

Maxwell allegedly “enticed” minors to travel to Epstein’s palatial residences in various U.S. states with the knowledge that those minors would be sexually abused.

During the aforementioned span of years in the 90s, Maxwell and Epstein were in an “intimate” relationship; Epstein paid Maxwell to manage the very properties she allegedly enticed minors to visit. The indictment included the image of Epstein and Maxwell that you see at the top of this story.

The indictment repeated a lot of details that match what has already been alleged or reported about Maxwell and Epstein’s grooming methods. For instance, it was alleged that Maxwell would try to “befriend” would-be victims by asking them about “their lives, their schools, and their families.” This opened the door to serial manipulation of vulnerable young girls. According to the indictment, once a so-called friendly rapport was established, discussions about the victims’ childhoods turned into discussions about sex; discussions about sex turned into sexual abuse.

“Having developed a rapport with a victim MAXWELL would try to normalize sexual abuse for a minor victim by, among other things, discussing sexual topics, undressing in front of the victim, being present when a minor victim was undressed, and/or being present for sex acts between the minor victim of Epstein,” the indictment said.

Prosecutors allege that Maxwell’s criminal voyeurism “helped put the victims at ease because an adult woman was present” as Epstein sexually abused the victims.

Having established this rapport, per the indictment, Maxwell “[i]n other instances . . . encouraged minor victims to provide massages to Epstein, including sexualized massages during which a minor would be fully or partially nude.”

“Many of those massages resulted in Epstein sexually abusing the minor victims,” the indictment said.

Maxwell “encouraged certain victims to accept Epstein’s assistance” and, as a result, “were made to feel indebted” to both Epstein and Maxwell, the indictment said.

“Through this process, MAXWELL and Epstein enticed victims to engage in sexual activity with Epstein” which in “some instances” also included Maxwell’s participation in sexual abuse, the indictment reads.

4. Where Maxwell “enticed” victims to travel.

According to the indictment, Maxwell groomed and enticed victims to travel to Epstein’s Manhattan townhouse, his mansion in Palm Beach, Florida, and his ranch in Santa Fe, New Mexico.

Epstein’s illicit activities at these locations are well documented. But the indictment also focused on Maxwell’s residence in London, England.

Maxwell is accused of grooming Minor Victim-1 by taking her shopping and to the movies and by inquiring about the child’s family and school life. Illicit sexual abuse soon followed across the Atlantic and in two states:

Maxwell allegedly interacted with Minor Victim-2 around 1996 at Epstein’s New Mexico ranch. The minor was allegedly flown to New Mexico from out of state. Authorities say the same shopping, movies, and small talk routine led Maxwell providing an “unsolicited” topless massage to a person she knew was a minor.

Maxwell allegedly groomed Minor Victim-3 in London between 1994 and 1995 and was aware the victim was a minor. Epstein went on to sexually abuse Minor Victim-3 on “multiple occasions,” the indictment said.

5. Prosecutors said that on two occasions in 2016 Maxwell lied under oath during depositions in a civil case.

On or around April 22, 2016, Maxwell said “I don’t know what you’re talking about” when asked if Epstein had a scheme to recruit young girls for “sexual massages.”

Maxwell also said she wasn’t aware that she interacted at Epstein’s properties with anyone who was a minor—excerpt for the plaintiff in the civil case who was 17 at the time of the interaction.

On or around July 22, 2016, Maxwell said that she did not recall sex toys being present at Epstein’s Palm Beach home. (There were sex toys there.) 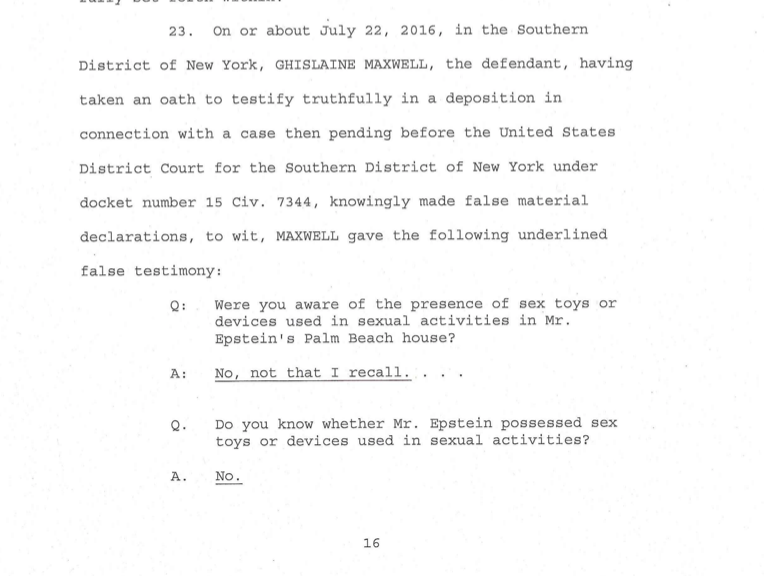 Maxwell admitted to having threesomes with a “blond and brunette” but said she “wasn’t aware that [Epstein] was having sexual activities with anyone when I was with him other than myself.”

Maxwell was asked if she had ever given someone a massage.

“I have never given anyone a massage,” she answered. 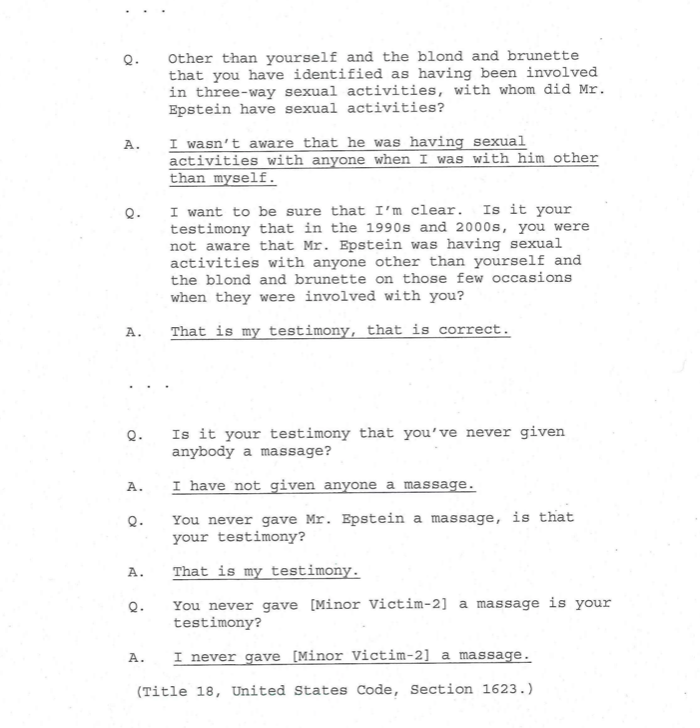 Copy of Ghislaine Maxwell Indictment by Law&Crime on Scribd