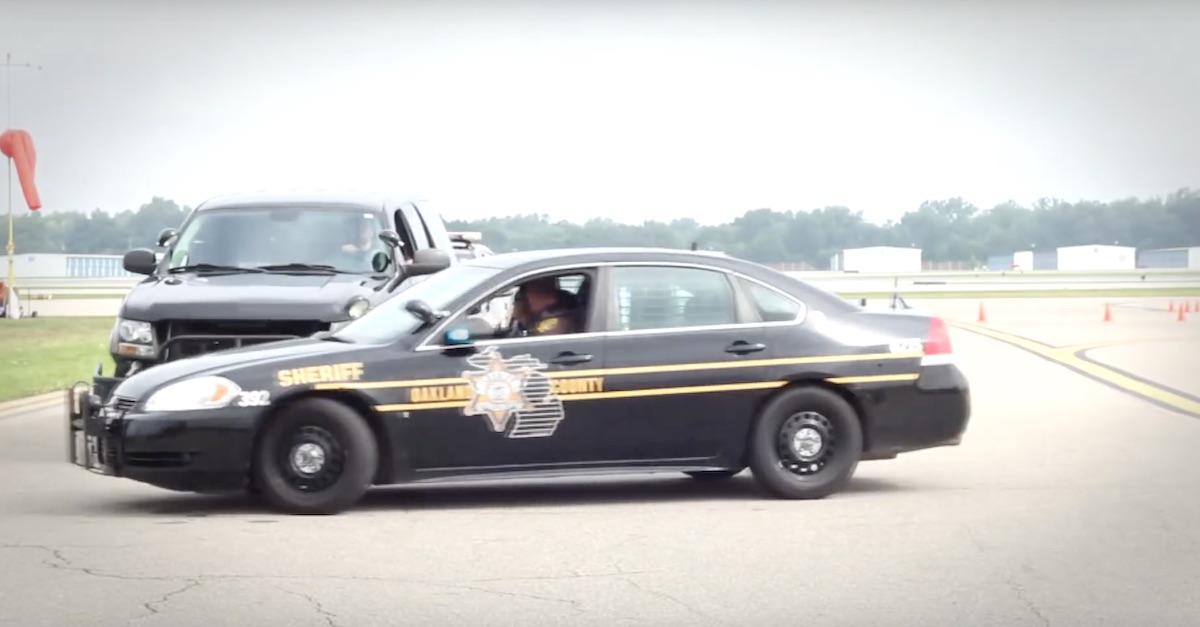 The United States Court of Appeals for the Sixth Circuit on Monday denied multiple male officers qualified immunity from a lawsuit brought by a woman who alleged that her rights were violated while in custody. This means the lawsuit is allowed to move forward.

The story goes that a “heavily intoxicated” Fazica was pulled over, arrested, taken to the Bloomfield County Police Department and then taken to the Oakland County Jail. Officers claimed she was yelling and spitting, so they put a mask (“spit hood”) over her head.

The Cell Extraction Team moved her into the jail, handcuffed and in a bent-over position. They handled her forcefully and threatened her with a taser. The entirely male team took Fazica to a room in the jail where she was made to lie on her stomach and was strip searched. Her pants were physically torn off her; one officer placed his hands on her genitals and another groped her breasts. Fazica was then made to walk to a cell wearing only her bra and the spit hood. The spit hood had obscured her vision for much of the incident, largely preventing her from attributing specific acts to specific officers.

Be warned — the details of the case from here, as described by the court, are disturbing and graphic (citations removed):

Fazica had been wearing the jumpsuit that she had been issued at the Bloomfield Township jail with the arms tied around her waist and no underpants. She also wore a bra and shirt. Once the officers brought her into the room, they placed her face down on her stomach in a prone position on the floor, still wearing the spit hood. She was “freaking out” and asking “what are you guys doing,” but she was not physically resisting. One officer “pushed her face down” and an officer “said everyone gets stripped search [sic], just shut up.” Fazica does not recall how the officers got her shirt off. An officer ripped her pants off from behind—literally tearing them apart. One officer then “had [her] butt cheeks spread apart and there was [sic] hands like he was feeling for something.” He placed his hands on her genitals. Another officer put his hands up the front of Fazica’s bra and felt her nipples; Fazica felt his hands shaking as he did it. The officer who felt Fazica’s breasts “asked what the clips were, and the gentleman behind [her] said they were the clips to [her] bra, don’t worry about it.” The same officer who had his hand on her breasts called her a bitch and one officer “kind of slap punched [her] when [she] was in the strip search room because he was mad because [she] was hysterical.” The officers did not remove her bra. She could not hear any female staff in the room and believes that no other females were present during the strip search. Fazica knew that the officers who were strip searching her and who were present in the room were male because of their voices and their hands.

Fazica claims that after the strip search, she was returned to her cell without pants on and received no medical attention, despite that being promised to her. She said she had bruises all over her body:

After the strip search, the officers walked her to a cell wearing nothing more than her bra and the spit hood. They “put [her] onto the ground, they threw a pair of scrubs into the corner of the [cell]” and then “they ripped the mask off and the door shut.” When the spit hood was removed, Fazica saw “a couple males walk away laughing.” She testified that it was around 10:00 P.M. by that point. Her nose was bleeding, and she got dressed. She was told that she would see a nurse, but no nurse ever arrived. Fazica was booked and photographed. She was returned to her cell. Someone asked her over the speaker in her cell whether she had come to the jail naked. Someone at the jail gave her clothes from Goodwill and she was released on the morning of October 17, 2014. She was bruised from head to toe after the incident. The day after she was released, she went to the hospital with her husband.

The officers actually argued that because Fazica was wearing a mask that they put on her, she shouldn’t be allowed to sue them.

“Defendants argue that because Fazica cannot clearly attribute particular uses of force to particular Defendants, she cannot prove that any particular Defendant’s conduct violated her constitutional rights,” the Monday opinion said. “For example, they argue that she cannot prove whether it was Defendant Officer Fletcher, Cordova, Tucker, or Jordan who was the one to twist her arm behind her back, rip her pants off, touch her genitals, etc., and that therefore she must lose at summary judgment.”

The court rejected this argument.

“We reject Defendants’ argument and conclude that a reasonable jury could find that each of the named Defendants violated Fazica’s clearly established constitutional rights either by directly using excessive force against her or by observing others doing so and failing to act,” the court said. “The burden of proof at trial will still rest with Fazica. She must show that each individual Defendant either exerted excessive force on her or observed his coworker do so and, given the opportunity, failed to intervene.”