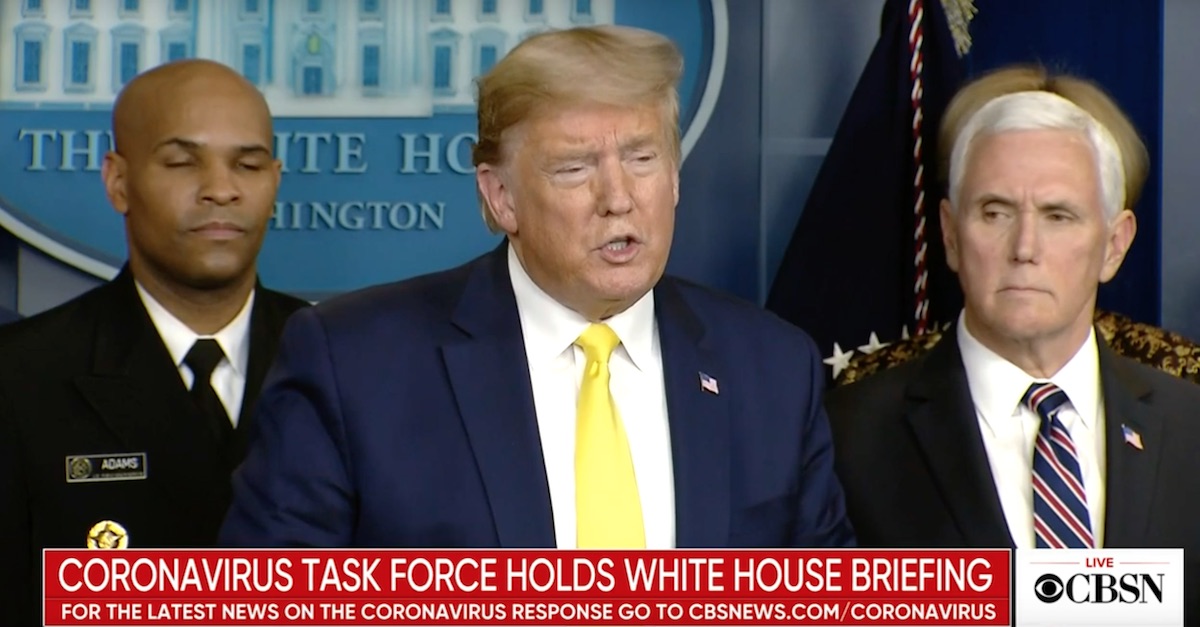 After a market plunge, the White House Coronavirus Task Force and President Donald Trump held a briefing on Monday. During that briefing, the president discussed an economic relief package to help stem the tide–a package that would also apply to hotels, which the president owns.

It didn’t take long for reports on this to be written and for questions to abound. Could we soon be seeing a U.S. president say “I hereby grant federal relief to myself”? Trump “failed” to divest from his businesses, so the suspicions that he intends to profit off of his office persist. On the other hand, his supporters might point to the donation of $100,000 in salary to the Department of Health and Human Services (HHS) in order to “confront, contain, and combat #Coronvairus.”

President @realDonaldTrump made a commitment to donate his salary while in office. Honoring that promise and to further protect the American people, he is donating his 2019 Q4 salary to @HHSGov to support the efforts being undertaken to confront, contain, and combat #Coronavirus. pic.twitter.com/R6KUQmBRl1

To be clear, the discussed relief package is not limited to hotels, but would seem to apply to hospitalities and the travel industry more broadly. In Trump’s own words:

The Washington Post responded with a report on this, noting that it wasn’t clear if the Trump Organization would benefit:

It’s not clear how U.S. relief would be administered or whether President Trump’s own hotels could be beneficiaries. Administration officials also disagree on the extent to which some of these measures could be undertaken without Congress.

Would Trump hotels, which the president still personally profits from, be eligible for this special federal relief? https://t.co/xaLraMznNy

Trump just said he was going to give himself/hotel industry relief.

Trump’s Hotels will benefit from Trump’s special federal relief package for hotels amid the coronavirus.
This man knows no shame! https://t.co/s59lZL4xu4