E. Jean Carroll Sues Trump for Defamation: ‘Nobody in This Nation Is Above the Law’ 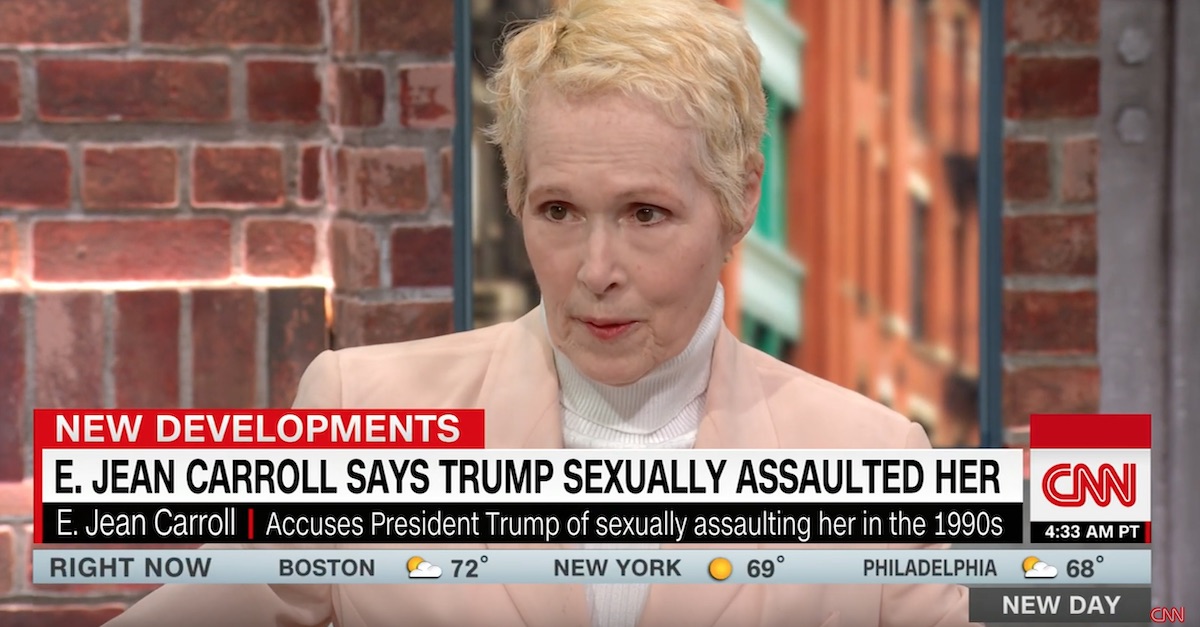 Author and advice columnist E. Jean Carroll, who accused Donald Trump months ago of raping her in a dressing room back in the ’90s, sued the president in his personal capacity on Monday, accusing him of “malicious libel.”

The president previously denied the accusation, saying, “I’ll say it with great respect. No. 1, she’s not my type. No. 2, it never happened. It never happened, O.K.?”

Carroll claimed in a complaint filed Monday that Trump defamed her when he said that she was lying about being raped to sell more books. She also said it was a lie that Trump didn’t know who she was (the lawsuit included a photo of them at a party in 1987):

When Carroll’s account was published, Trump lashed out with a series of false and defamatory statements. He denied the rape. But there was more: he also denied ever having met Carroll or even knowing who she was. Through express statements and deliberate implications, he accused Carroll of lying about the rape in order to increase book sales, carry out a political agenda, advance a conspiracy with the Democratic Party, and make money. He also deliberately implied that she had falsely accused other men of rape. For good measure, he insulted her physical appearance.

Each of these statements was false. Each of them was defamatory.

Carroll alleged that “These lies were familiar to Trump.”

“He had used them before, when other women stated that he had grabbed, groped, or raped them,” the lawsuit said. “Trump’s defamatory statements injured Carroll. They inflicted emotional pain and suffering, they damaged her reputation, and they caused substantial professional harm.”

The aim of the lawsuit, in its own words:

Carroll filed this lawsuit to obtain redress for those injuries and to demonstrate that even a man as powerful as Trump can be held accountable under the law.

The first line of the lawsuit said “nobody in this nation is above the law.”

Carroll claimed that, though she was horrified by accusations other women made against Trump ahead of the 2016 election, she “decided to remain silent” because she wanted to make her dying mother’s “last days as pleasant as possible and avoid causing her any pain.” The lawsuit said Carroll changed her mind in late 2017, “when the Harvey Weinstein scandal and its aftermath signaled a profound shift in how American society responds to accusations of sexual misconduct by powerful men.”

“It suddenly seemed possible that even Trump could be held to account,” the lawsuit continued.