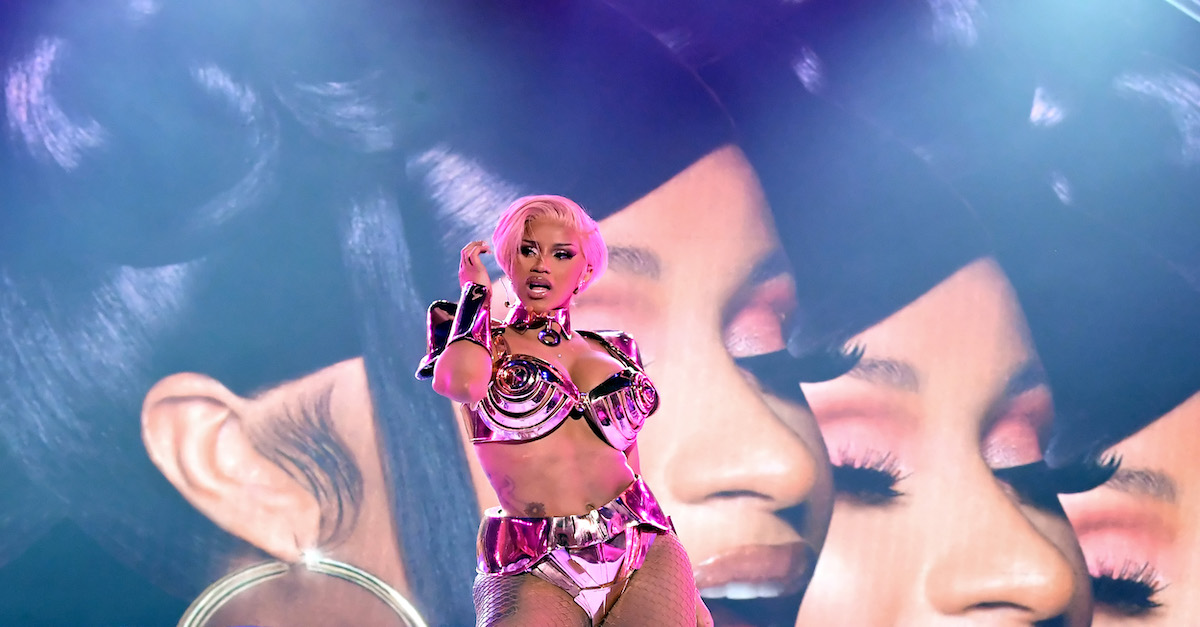 Cardi B performs onstage during the 63rd Annual GRAMMY Awards in Los Angeles, California, broadcast on March 14, 2021. (Photo by Kevin Winter/Getty Images for The Recording Academy)

A federal judge who will preside over a civil trial involving Cardi B plans to briefly summarize the salacious lawsuit for prospective jurors before dismissing any of them, hoping the details could entice more into service.

Under her legal name Belcalis Almanza, the superstar rapper is being sued by Kevin Michael Brophy, who claims the cover to her first album Gangsta Bitch Music, Vol. 1, which depicts a man performing oral sex on her, misappropriates his likeness because it features his distinctive back tattoo.

Trial is scheduled Aug. 3 before U.S. District Judge Cormac J. Carney in Santa Ana, Calif., and the judge said during a pre-trial hearing on Monday that the case is far from the typical civil dispute that bores people out of the jury pool.

“I don’t think this case is a complex case, but I do think it’s a very interesting case and I’d like them to know this is the case before they think about whether they want to get off the case or not,“ Carney said.

A. Barry Cappello of Cappello & Noël, who’s representing Brophy with firm partner Larry Conlan, agreed. “They should be interested,” he said.

So before asking prospective jurors about their ability to serve, the judge plans to read aloud a brief synopsis of the case, which he finalized Monday with attorneys.

Cardi’s lawyer, Alan Dowling, first said a statement about the album art “depicting sexual activity with Cardi B” was a “Trojan horse,” because Brophy is not actually the man in the photo, and the pictured activity isn’t true sexual activity.

“There’s a vast and complex debate that’s going to go on in this case about what exactly’s in this picture,” Dowling said.

Cappello said Dowling was welcome to draft his own language saying “that having a person’s hand over their head and putting their head between their lap is not sexual activity.”

“He can put whatever he wants in there,” Cappello said.

Carney agreed to also tell jurors that Cardi believes “the image does not portray actual sexual activity,” that Brophy isn’t the man in the image, and that it “did not show him in a false light and would not be highly offensive.”

The judge said he’ll also ask potential jurors whether they have strong feelings about tattoos and rap music, and if they’ve heard of Cardi B and have negative or positive views.

Attorneys have a few things to iron out before trial, including possible redactions to business documents for Cardi such as tax returns, which could be used if the trial reaches the punitive damages phase. Carney said if the information isn’t relevant, he hopes Brophy’s lawyers will agree “that they’re not going to use it to try to embarrass Cardi B.”

Filed in October 2017, the 13-page complaint accuses Cardi of misappropriating Brophy’s likeness and portraying him in a false light by using his distinctive tattoo design, which depicts “an enormous tiger  bearing its fangs in a battle with a giant snake” on her album cover.

Brophy is a former lead singer in the rock band “The Pricks” who works for “a socially-conscious surf and lifestyle company in Newport Beach, California,” according to the lawsuit, and his tattoo “has become a unique feature and likeness by which both his friends and the business and surfing community know him.” Brophy says he learned of Cardi’s March 2016 album cover in early 2017 when a friend asked him if he knew about it and emphasize “how crazy it was that his back and body art were on the cover, showing him cunnilinging this rapper called Cardi B.”

“Plaintiff then searched for Gangsta Bitch on the internet and was shocked, outraged, humiliated, and appalled at what he saw,” according to the complaint. “Plaintiff has never met Cardi B, yet she and her agents and fellow-defendants forced him unwillingly into an image of his face between her legs, which are spread wide around his back and his tiger snake tattoo.”

The trial was postponed because of the Central District of California’s 14-month ban on jury trials during the pandemic.

Carney then delayed the trial again last September after Cardi said she was concerned about traveling from New York to California after the birth of her son, saying the “sheer burden” of cross-country travel with her family “would be substantial and unreasonable, and should be avoided.”

Brophy’s lawyers asked Carney to reset the trial date and sanction Cardi after photos showed her in France for Paris Fashion Week, writing that her “cynicism toward the legal process and the rights of others has grown breathtaking in its audacity.”

Cardi called the accusations “libelous,” and the judge declined to sanction her, saying she well explained “why traveling to Paris Fashion Week was different than traveling for this trial.”