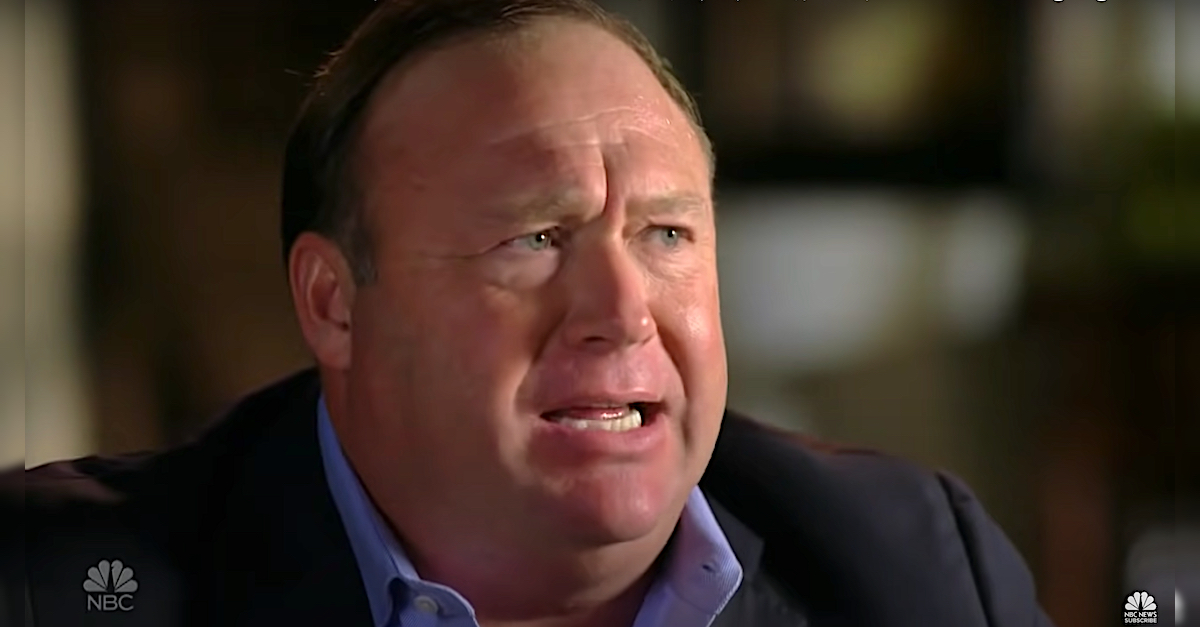 A Connecticut judge has temporarily paused InfoWars host Alex Jones‘ attempt to remove his lawyers in a defamation case against him brought by parents of children killed in the Sandy Hook massacre, ordering the right-wing radio jockey’s lawyers to stay on the case for at least a few more weeks.

“Defendants Alex Jones and Free Speech Systems, LLC have discharged the law firm of Pattis & Smith, LLC and Attorney Atkinson from representing them in this matter,” the motion said, adding that before Jones’ bankruptcy case was dismissed, Pattis and Atkinson had been similarly fired from representing Jones.

“Pursuant to Connecticut Rule of Professional Conduct 1.16(a)(3), the undersigned and his colleagues’ withdrawal is mandatory,” the motion adds, citing the state rule that says a lawyer “shall withdraw” from representing a client if “[t]he lawyer is discharged.”

Not so fast, the parents said in an opposition to the withdrawal motion filed Wednesday.

“As the Court explained in its November 15, 2021 sanctions order defaulting the Jones defendants, the ‘history of the attorneys who have appeared for the [Jones] defendants . . . is a convoluted one,’ and one that has previously impeded progress toward trial and contributed to the Jones defendants’ strategy of obfuscation and delay,” attorneys Alinor Sterling, Christopher Mattei, and Colin Antaya wrote in their opposition.

Indeed, as both the lawyers for the plaintiffs and Judge Barbara Bellis noted, Jones’ representation in this case has changed hands numerous times, with some lawyers making multiple withdrawals and appearances:

As the plaintiffs note in their opposition, “[t]he Court found that this ‘convoluted,’ series of appearances and withdrawals was part of a ‘transparent attempt to cloud the issues by Pattis & Smith [citations removed]. For this reason alone, another change of counsel should not be permitted.”

Attorneys for the plaintiffs said that it’s no coincidence that Pattis and Atkinson’s motion to withdraw comes just two months before the long-delayed trial is finally set to start: jury selection is scheduled for Aug. 2, and trial scheduled for Sept. 1.

As the plaintiffs note in their opposition, Bellis said in March that the trial date “is a firm trial date and parties and counsel should plan accordingly.”

Jones’ move, however, is just another delay tactic, the plaintiffs say.

Bellis, in an order issued on Thursday, appears to at least partially agree with the plaintiffs, and ordered Jones’ lawyers to stay on the case until the next hearing, set for June 15.

“Today, in light of these disturbing circumstances, the court enters the following additional order. Attorney Atkinson, Attorney Pattis, and the law firm of Pattis & Smith are ordered to continue representing the remaining Jones defendants until the court has adjudicated this motion,” Bellis wrote in her order.

Perhaps not coincidentally, Jones’ motion to remove his lawyers from the case was filed the same day as the bankruptcy case involving three companies associated with Jones was remanded back to Connecticut state court. InfoWars, IWHealth, and Prison Planet TV—all companies linked to Jones—filed for Chapter 11 bankruptcy protection in April.

According to court records, the companies withdrew that action on May 24.

Jones is facing similar defamation lawsuits in Texas. Those trials were also put on hold for the bankruptcy proceeding, but they are now expected to proceed.

The attorneys for both the parents and for Jones declined Law&Crime’s request for comment.