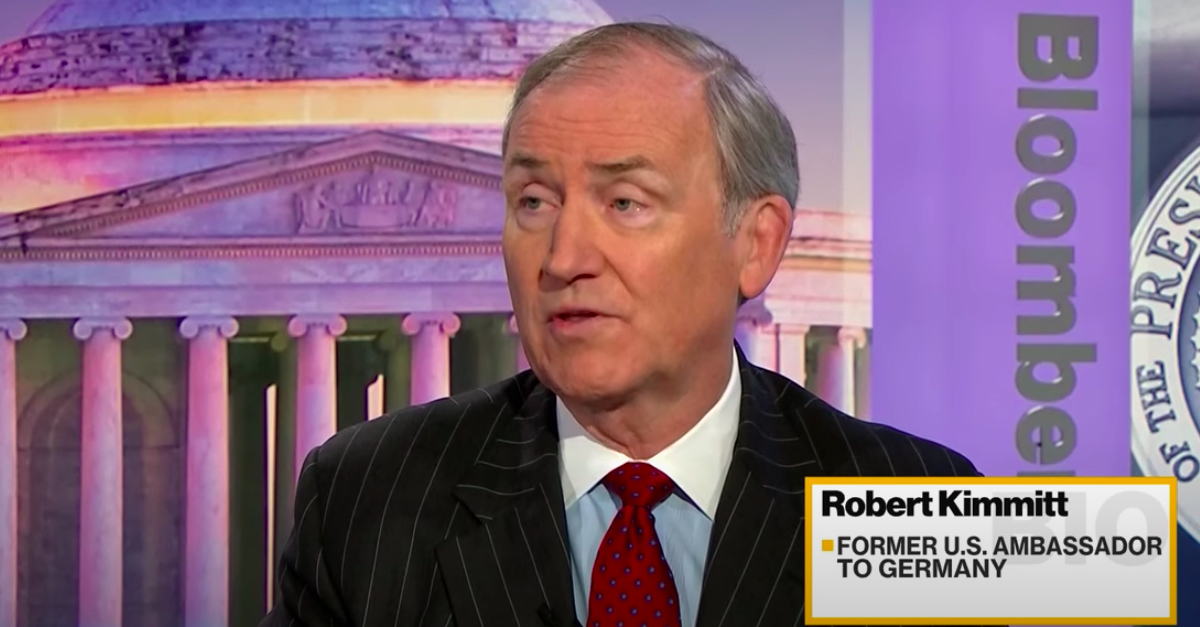 Multinational investment firm Deutsche Bank AG has hired one of U.S. Attorney General William Barr’s longtime friends to help the bank manage some of its pressing political problems in the nation’s capital, Bloomberg reported on Wednesday. The bank’s supervisory board, headquartered in Frankfurt, decided earlier this year to bring on attorney and former U.S. Ambassador to Germany Robert Kimmitt, whose friendship with the AG dates back to the eighties.

Though Kimmitt’s role within the organization is not clear “even to many executives within the bank,” Bloomberg cited sources that said the bank’s top executives in Germany brought him on in an effort to “bolster its presence” in Washington, where the firm has faced increased scrutiny due to several criminal inquiries and its high-profile but enigmatic relationship with President Donald Trump.

“Some senior executives in Germany hope that Kimmitt’s longstanding relationship with Barr could help clear up a log-jam of Justice Department investigations,” Bloomberg reported, citing people familiar with the matter.  “Bank leaders are aware that if Trump is not re-elected in November, any settlement with a future Justice Department is likely to be tougher than what might be available this year, they said. Politically appointed prosecutors may also have incentive to wrap up the cases before they’re replaced, the people said.”

But the bank’s domestic leadership has reportedly been kept largely out of the loop regarding Kimmitt’s hiring. Bloomberg reported—again citing several people familiar with the matter—that “many top executives in the U.S. weren’t immediately informed of [Kimmitt’s] role,” despite the bank’s legal team being engaged in ongoing negotiations with the Department of Justice regarding multiple protracted investigations.

“A little more perspective on this: A person close to the bank tells me that Kimmitt was hired by Deutsche Bank’s supervisory board. Board members are using him to assess how well bank executives are interacting with regulators, prosecutors, etc. He won’t be lobbying for DB,” Enrich tweeted.

A little more perspective on this: A person close to the bank tells me that Kimmitt was hired by @DeutscheBank’s supervisory board. Board members are using him to assess how well bank executives are interacting with regulators, prosecutors, etc. He won’t be lobbying for DB.

As recently as July, Deutsche Bank agreed to a $150 million settlement with New York state financial regulators over its relationship with since-deceased sex offender Jeffrey Epstein, shining a light on the bank’s consistent failure to comply with financial regulations concerning millions of dollars of suspicious transactions. Per the consent agreement, an unnamed personal attorney working for Epstein made 97 separate cash withdrawals from Epstein’s accounts at the same Manhattan location between 2013-2017. The transactions, which occurred two to three times per month, were all in the amount of $7,500, Deutsche Bank’s limit for third-party withdrawals.

“The Bank was well aware not only that Mr. Epstein had pled guilty and served prison time for engaging in sex with a minor but also that there were public allegations that his conduct was facilitated by several named coconspirators. Despite this knowledge, the Bank did little or nothing to inquire into or block numerous payments to named co-conspirators, and to or on behalf of numerous young women, or to inquire how Mr. Epstein was using, on average, more than $200,000 per year in cash,” the agreement said.

Similar claims have made against the bank regarding “suspicious” transactions at companies controlled by Trump and Jared Kushner.

Deutsche Bank and Trump already have a tumultuous past, with Trump suing the bank after the 2008 financial crisis, claiming it was an “act of God” that voided the contracts on hundreds of millions in loans. Deutsche Bank attorneys filed court documents showing that, after the 2008 crash, Trump bragged to several media outlets that his company had tons of cash on hand but then claimed he couldn’t repay his loans.

The bank has also been embroiled in controversy over its alleged role in a $20 billion Russian money laundering scheme.