Complaint Formally Accuses Postmaster General of Breaking the Law: ‘The FEC Needs to Crack Down on Violations Like This…’

The complaint leaned heavily, but not entirely, on a recent Washington Post report headlined, “Louis DeJoy’s rise as GOP fundraiser was powered by contributions from coworkers who were later reimbursed, former employees say.” Under federal law, having someone else make a campaign finance contribution on your behalf is expressly illegal (see, for reference, the “Straw Donor Scheme” Lev Parnas et al. are accused of perpetrating).

Contributions in the Name of Another are Strictly Prohibited

Reimbursing someone for a contribution or otherwise contributing in the name of another person can result in substantial civil penalties and jail time. The FEC and the Department of Justice have prosecuted several such cases over the last few years. These violations sometimes occur when an individual who has already contributed up to the limit to a campaign gives money to another person to make a contribution to the same candidate.

North Carolina Attorney General Josh Stein (D) promptly chimed in on the allegations in the WaPo report, noting that “It is against the law to directly or indirectly reimburse someone for a political contribution.” North Carolina state law also prohibits the practice and there is no statute of limitations for violations of the state statute–which are felonies.

According to the complaint filed by the Campaign Legal Center (CLC), campaign finance records show “several instances of XPO employees contributing to the same candidate or committee, during the same period of time, and often in similar amounts.”

“DeJoy family members, including DeJoy’s college-aged children, also made contributions on the same day or in the same period as those employees,” the complaint said. “Between 2015 and 2018, XPO Logistics employees and DeJoy family members following this pattern together gave over $150,000 to the same candidates and committees, including over $50,000 to Trump Victory, President Donald Trump’s joint fundraising committee.” 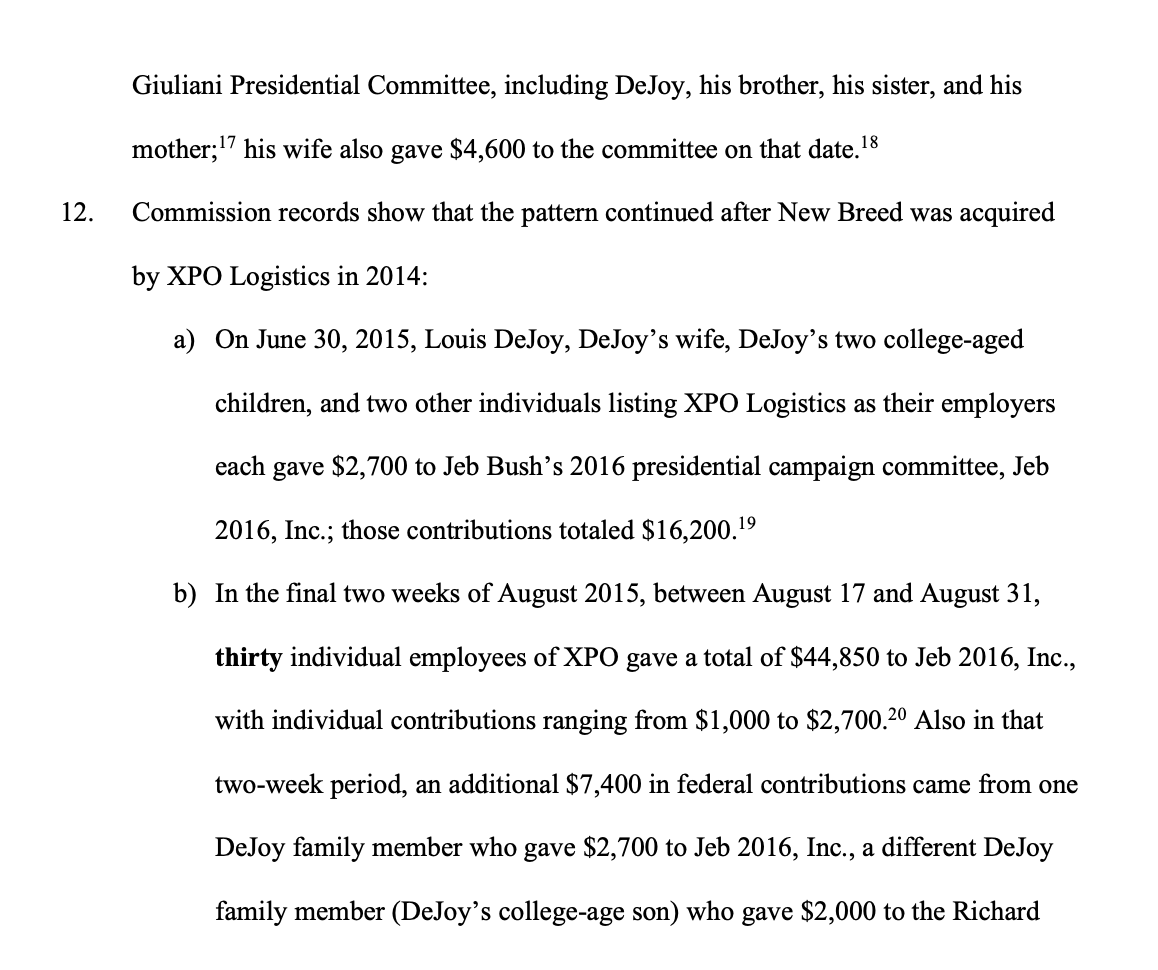 The complaint noted that FECA violations are “generally subject to a five-year statute of limitations, 28 U.S.C. § 2462″—a relevant fact considering that the complaint focuses on contributions made from 2015 to 2018, when DeJoy was a board member at XPO Logistics.

CLC Director of Federal Reform Brendan Fischer said in a statement obtained by Law&Crime that DeJoy’s “reimbursement scheme disguised the true source of potentially hundreds of thousands of dollars in contributions, and appears to have continued through 2018.”

“DeJoy is legally permitted to make contributions, as long as he does so in his own name, using his own money, and within legal contribution limits—but that does not appear to have happened,” Fischer said. “Straw donations, where a donor routes campaign contributions through another person, are prohibited because they are a means of evading the law’s transparency requirements and contribution limits. The FEC needs to crack down on violations like this to protect the right of voters to know who is giving money to influence their vote and our government.”