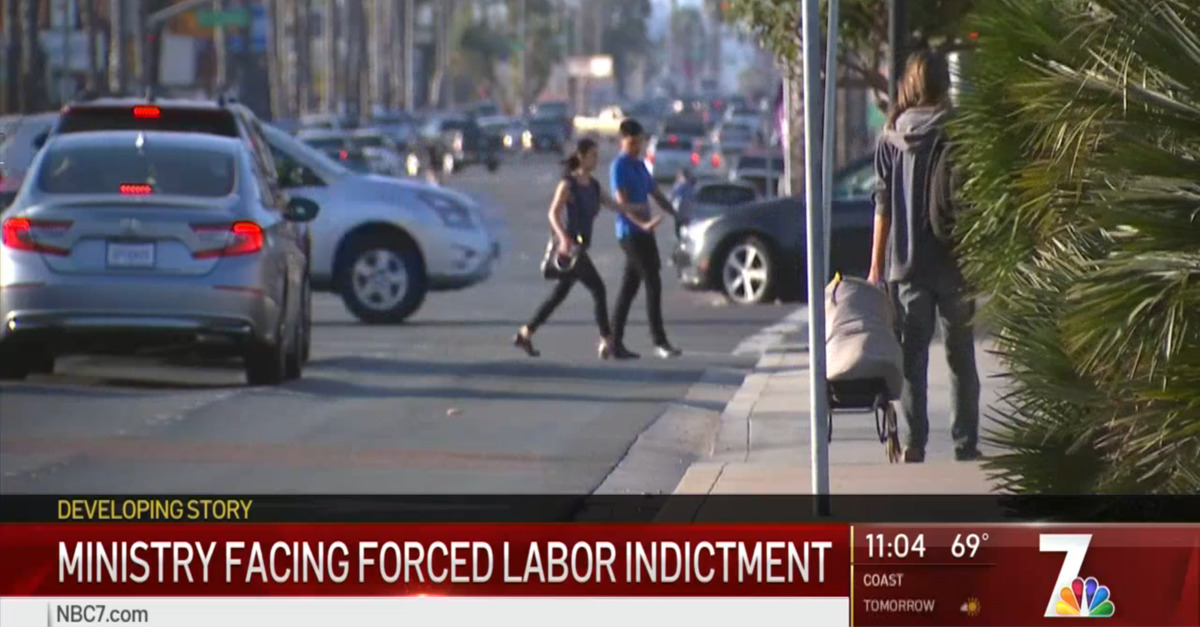 Several church leaders in Southern California were arrested over allegations they held homeless people against their will and used those individuals to perform forced labor while giving their welfare benefits to the church. The details are gruesome.

According to a 29-page indictment filed in the U.S. District Court for the Southern District of California, 12 leaders of Imperial Valley Ministries (IVM), including one of the church’s former pastors, were charged with multiple counts of conspiracy, forced labor, document servitude and benefits fraud on August 23, 2019. Those church leaders were arrested across various cities in Texas and California on Tuesday morning.

The indictment accuses various church leaders of committing several dozen outrageous acts in furtherance of an alleged human trafficking, coercion, theft and forced labor conspiracy. The alleged crimes were committed against no less than 30 “mostly homeless” individuals over the course at least five years.

At least two individuals were allegedly told their children would be taken away from them if they attempted to leave the IVM church.

In one particularly shocking allegation documented in the indictment, church leaders “refused an IVM participant’s request to seek medical attention for a prolapsed uterus.”

[IVM leaders] falsely represented to Z .C. that J.B., his fiancee, no longer loved him and did not want to be with him, and told him that only God loved him, all in order to compel him to remain with IVM.

“The indictment alleges an appalling abuse of power by church officials who preyed on vulnerable homeless people with promises of a warm bed and meals,” U.S. Attorney Robert Brewer said in a press release. “These victims were held captive, stripped of their humble financial means, their identification, their freedom and their dignity.”

The indictment notes that IVM sells itself as a church whose target is “the drug addict,” with the goal “to restore drug addicts and their families.” The church’s ultimate vision is described as an effort “to plant Restoration Churches in the inner cities.” To that end, IVM has established some 30 or so churches nationwide since its inception in the 1970s.

But according to federal investigators, much of that expansion has come from the aforementioned use of forced labor, coercion and theft of government benefits.

The indictment notes how homeless people were allegedly forced to panhandle on behalf of the church:

It was part of the scheme that Defendants knowingly benefitted [sic] financially from a venture that required IVM participants to obtain panhandling proceeds through a scheme, plan, and pattern intended to cause IVM participants to believe that if they did not panhandle on behalf of IVM they would suffer serious psychological, financial, or reputational harm. The Defendants participated in the venture knowing or in reckless disregard of the fact that it had engaged in obtaining the IVM participants’ labor by such means.

“It was further part of the scheme that Defendants knowingly recruited, transported, and harbored IVM participants for labor and services in violation of the Forced Labor statute,” the indictment continues.

And, according to the government, there was a system to keep their allegedly ill-gotten workforce from leaving the church’s religious compounds.

It was [also] further part of the scheme that Defendants knowingly confiscated and possessed government identification documents belonging to IVM participants in order to prevent IVM participants from leaving IVM and to maintain the IVM participants’ labor in violation of the Forced Labor statute.

The years-long alleged scheme only came to light after a 17-year-old claimed to have escaped from IVM by breaking through a sealed window. After running to a neighboring property, the teenager was treated for cuts sustained during his escape and then he told his story to local police.