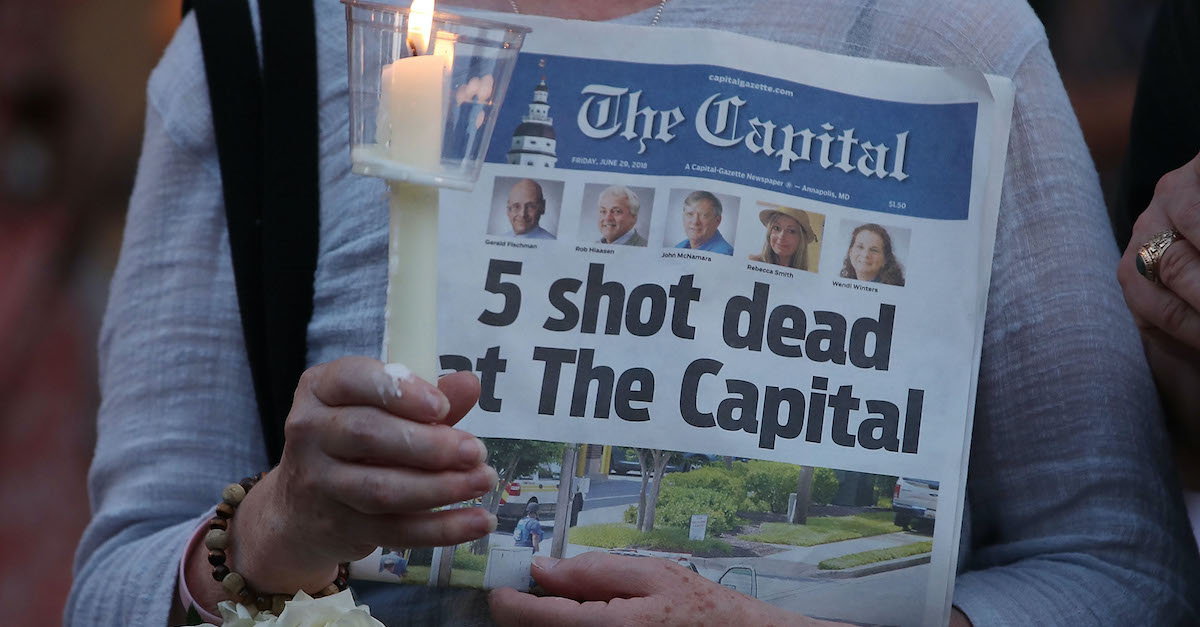 A women holds today’s edition of the Capital Gazette newpaper during a candlelight vigil to honor the 5 people who were shot and killed yesterday, on June 29, 2018 in Annapolis, Maryland. Jarrod Ramos of Laurel Md. Has been arrested and charged with killing five people at the daily newspaper.

The gunman who opened fire inside the Capital Gazette newsroom in Annapolis, Md., leaving five people dead, will have a prison term longer than a life sentence for every media worker he killed, a judge ruled on Tuesday.

Jarrod Ramos, 41, was sentenced on Tuesday after a jury rejected his insanity defense in the 2018 massacre.

The jury, consisting of eight men and four women, found that Ramos had the mental and emotional capacity to understand that his actions were wrong. That finding made Ramos criminally responsible for killing Wendi Winters, John McNamera, Gerald Fischman, Rob Hiaasen and Rebecca Smith.

After the July verdict, Anne Arundel County Attorney Anne Colt marked what she described as a “bittersweet day.”

“It’s been more than three years since Jarrod Ramos intentionally and methodically entered the Capital Gazette suite located at 888 Bestgate Road and executed a revengeful act against innocent victims,” Colt said in a statement at the time. “In a matter of minutes, he robbed the families of more hugs and kisses and friends of more priceless moments but most importantly, each and every one of them of more time. Their loss will forever impact our community but their words and legacy will always remain.”

Colt described the victims as “our Guardians of the First Amendment.”

Moments ago, Jarrod Ramos was sentenced to five life sentences without parole plus one life sentence plus 345 years. They all will run consecutively.

In 2019, Ramos pleaded guilty to all 23 counts charged against him in connection with the murders, but his legal team of public defenders claimed that their client was “not criminally responsible,” Maryland’s equivalent of an insanity plea. Had the gambit prevailed, Ramos may have been transferred to a maximum security psychiatric facility, where he would have an eventual opportunity to be released.

Ramos’s sentence means he will now spend the rest of his life behind bars, without the possibility of parole.

According to the Associated Press, Anne Arundel County Judge Michael Wachs said during Ramos’s sentencing that the killer showed no remorse for his actions and told a state psychiatrist that he would take more lives if released.

“The impact of this case is just simply immense,” Wachs reportedly said. “To say that the defendant exhibited a callous and complete disregard for the sanctity of human life is simply a huge understatement.”

As previously reported by Law&Crime, Ramos had a longstanding obsession with the Capital Gazette newsroom, which he unsuccessfully sued in 2012. The defamation suit stemmed from a 2011 article that was written about how Ramos, a former federal employee, pleaded guilty in District Court to a misdemeanor harassment charge for repeatedly contacting a woman online including calling her vulgar names. The victim said she felt in danger for her life. A judge threw out Ramos’s defamation claims.

“Justice was served today,” @AnneArundelSAO says outside courthouse after sentencing.

In a mass shooting case that gripped the community, even jurors in the gunman’s sanity trial came to court Tuesday to watch the sentence pic.twitter.com/rEWYvgM7RM

“In a mass shooting case that gripped the community, even jurors in the gunman’s sanity trial came to court Tuesday to watch the sentence,” she tweeted.

The Gazette reported that a widow of one of the victims, McNamera, delivered a statement at the sentencing.

“The real victim impact is that he’s gone when he deserved to be here. He deserved to enjoy seeing his recognition, to enjoy this time in his life, and I was so hoping to see it and experience it with him, and pay him back for all the kindnesses that he gave to me,” Andrea Chamblee reportedly said. “Now I never will.”