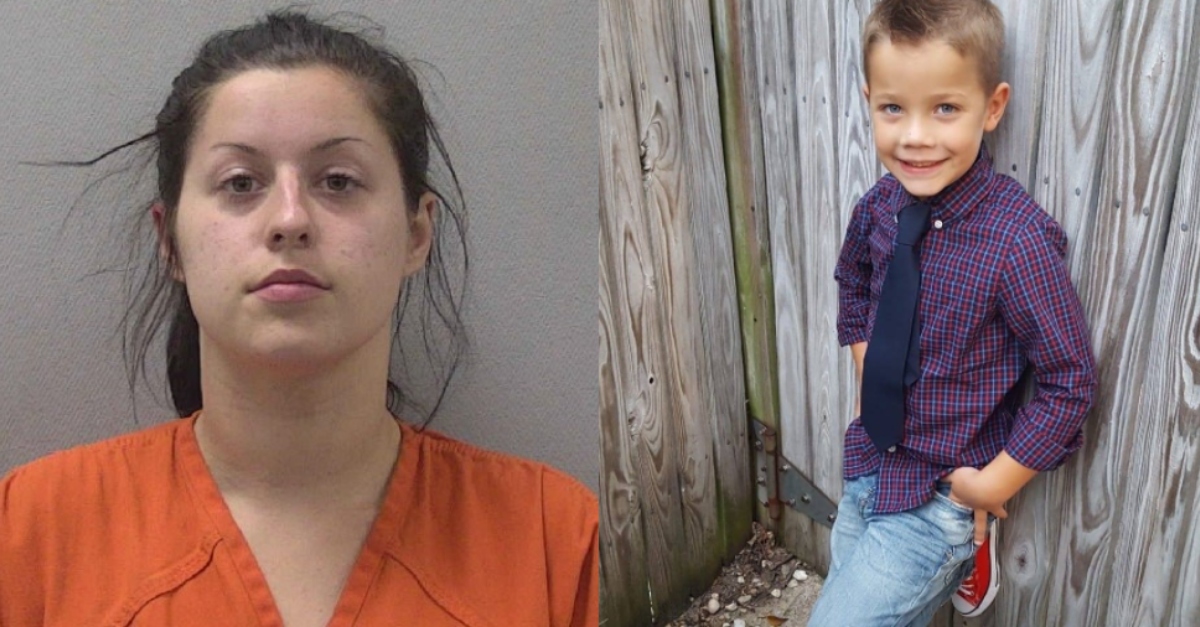 Despite a murder conviction in the case of a slain 8-year-old boy, authorities in South Carolina still don’t know who actually pulled the trigger.

Linda Monette, 25, was sentenced on Friday to 40 years in prison in a case where another suspect shot and killing young Mason Hanahan, said the 11th Circuit Solicitor’s Office in South Carolina. Monette had helped stage a home invasion to steal drugs and money from her boyfriend, who was the child’s father, authorities have said. Monette had attempted to pose as a helpless bystander — the plan being to have a gun held to her head.

“During closing argument, Deputy Solicitor Suzanne Mayes addressed Monette’s guilt under the ‘hand of one is the hand of all’ legal principle in South Carolina,” said the solicitor’s office.  In other words, it didn’t really mater who pulled the trigger; in the eyes of the law, everyone was similarly guilty. One well-cited South Carolina Supreme Court case explains:

Under the ‘hand of one is the hand of all’ theory, one who joins with another to accomplish an illegal purpose is liable criminally for everything done by his confederate incidental to the execution of the common design and purpose.

Several other key South Carolina cases also expound upon the principle. Several of those cases note that “[i]t is well-settled” under South Carolina law “that a defendant may be convicted on a theory of accomplice liability pursuant to an indictment charging him only with the principal offense.”  And yet another case explains when the law does (and does not) allow co-defendants to be swept into the vast web of criminal culpability (internal punctuation cleaned up):

Mere presence and prior knowledge that a crime was going to be committed, without more, is insufficient to constitute guilt. Rather, presence at the scene of a crime by pre-arrangement to aid, encourage, or abet in the perpetration of the crime constitutes guilt as a principal.

Jurors found Monette guilty of charges including murder, criminal conspiracy, and burglary in the first degree.

“The murder of Mason Hanahan has been the intense focus of our entire office for over two years,” said 11th Circuit Solicitor Rick Hubbard. “The lifelong impact of this crime on Mason’s family, baseball teammates, and the Oak Grove community has been immeasurable.”

A shootout ended with Hanahan dead and his father injured. Ammunition from the other suspect’s gun killed young Hanahan, the autopsy determined according to Columbia, S.C. NBC affiliate WIS-TV.

“Mason Hanahan was a second grade student at Oak Grove Elementary and a standout player on the Pineview Dixie Youth Baseball team,” the solicitor’s office wrote. “Mason had dreams of becoming a professional baseball player and had been selected to the Dixie Youth All Star Team a week before his death.”

After the shooting, investigators soon put their attention on Monette, who prosecutors said made “multiple inconsistent statements.” Authorities looked at her ties to local gang members, they said.

“During a voluntary interview on May 17, 2019 with Lexington County Sheriff’s Department Lt. Marlo McCann and Detective Joe Hart, Monette admitted that she conspired with others to commit the staged home invasion and ‘have a gun held to her head’ as part of the plan for a robbery,” the solicitor’s office said.

In other words, it was an inside job.

“Monette and Mason’s father were in a relationship at the time of the incident,” Lexington County Sheriff’s spokesman Capt. Adam Myrick told Law&Crime in an email. “It was routine for her to stay at the Hanahan home.”

The child’s mother has said the boy was staying over at his father’s place after baseball practice. The last time she saw him was when helping him get ready for school.

“We’re all devastated,” Tyler Hanahan told WIS in 2019. “I keep thinking this is not real, and I’m going to be able to go and pick him up from school.”

Myrick told Law&Crime that investigators are still looking for the actual shooter.

“We really don’t have much to go on,” he wrote in an email after we asked for more information. “We know the home invasion was staged and arranged, in part, by Monette. As for details on the other person who was at the home and fired shots the night of the incident, our work continues on that part of the case. We believe people in the community know who that person is and we encourage them to come forward and share that name with us.”

People with information about the shooting can call Crime Stoppers anonymously at (888) 274-6372, Myrick said.

“No tip is too small and any information is greatly appreciated by law enforcement and the family of Mason Hanahan,” the solicitor’s office said while also mentioning the Crime Stoppers number.

The shooting resulted in separate and tangential charges against Mason’s father Austin Graham Hanahan; he was accused of selling illegal drugs. The elder Hanahan was arrested in 2019 for a count each of possession with intent to distribute marijuana, and unlawful conduct to a child. His attorney of record did not immediately respond to a Law&Crime request for comment.