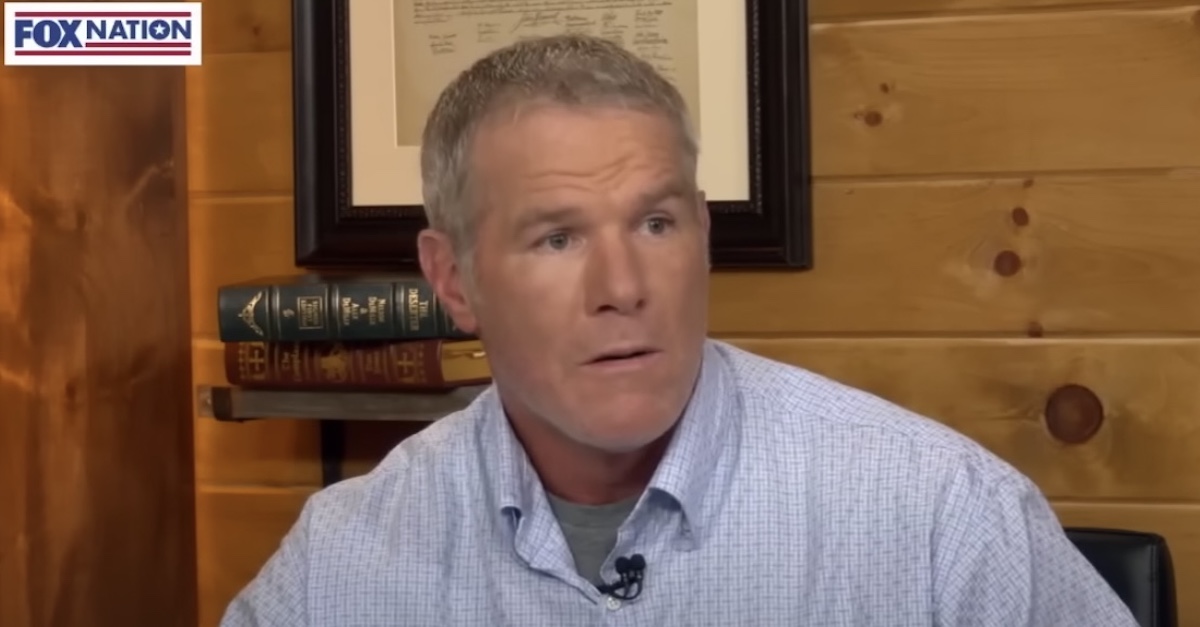 Former NFL quarterback Brett Favre is speaking out against allegations that he was involved in Mississippi welfare fraud case that state auditors say is one of the largest public corruption cases in the state’s history. In a statement released to Fox News Digital, Favre vehemently denied any wrongdoing and asserted he was unaware that any of the money paid to him or his alma mater was earmarked for welfare programs in the country’s poorest state.

“I have been unjustly smeared in the media,” Favre reportedly said in the statement. “I have done nothing wrong, and it is past time to set the record straight.”

Favre, who has not been charged with a crime, has been entangled in the massive corruption scandal that reportedly involved more than $77 million and has ensnared several high-ranking government officials.

The Hall of Fame quarterback was allegedly paid $1.1 million from the Temporary Assistance for Needy Families (TANF) program – $500,000 in December 2017 and $600,000 in June 2018 – for purported public speeches the football legend never gave at events he never attended, according to a report from Mississippi State Auditor Shad White, the man who uncovered the misspending.

Favre and his attorney, Bud Holmes, have repeatedly maintained his innocence regarding the no-show speech claim, and they have insisted the former Greenbay Packer was ignorant of where the funds were sourced. He has paid most of the money back, except an alleged substantial amount of interest.

Favre has also been accused of knowingly funneling $5 million from the welfare fund to pay for the construction of a new volleyball stadium at the University of Southern Mississippi, the school where he played college football before being drafted and where his daughter played on the volleyball team from 2017 until 2022.

“No one ever told me, and I did not know, that funds designated for welfare recipients were going to the University or me. I tried to help my alma mater USM, a public Mississippi state university, raise funds for a wellness center. My goal was and always will be to improve the athletic facilities at my university,” Favre’s statement continued. “State agencies provided the funds to Nancy New’s charity, the Mississippi Community Education Center, which then gave the funds to the University, all with the full knowledge and approval of other State agencies, including the State-wide Institute for Higher Learning, the Governor’s office and the Attorney General’s office.”

Favre also claimed he was told that State attorneys and other public employees had done the legal work to ensure that the school could accept the funds.

Favre’s relationship with the disgraced and recently-convicted New — a non-profit director and one of the welfare scheme’s principals — was thrust back into the spotlight last month when text messages exchanged between the two were made public. In the messages, Favre appears to express concern that the media would learn the source and amount of money proposed that would go to him from the state.

“If you were to pay me is there anyway the media can find out where it came from and how much?” Favre wrote to New.

“No, we never have had that information publicized,” she replied.

Eric Herschmann, another Favre attorney, reportedly told Fox News that his client simply “didn’t want his source of income to be public.”

New and her son, Zach New, have both pleaded guilty to state charges that they misused public funds and have agreed to testify against their alleged coconspirators. Former Mississippi Department of Human Services Director John Davis also agreed to cooperate with investigators after pleading guilty to federal charges of conspiracy to commit wire fraud and theft concerning programs receiving federal funds.

The state auditor’s office provided a statement to Fox News explaining why an attorney in the Mississippi Attorney General’s Office was incorrect in approving the grant to Southern Miss.

“The volleyball court needed to be used to benefit the needy in Hattiesburg,” White reportedly said. “And fast-forward to today, what we know now is that the volleyball court has not been used to benefit the needy. So, this is an unallowable use of TANF funds for a few different reasons. And for those reasons, it doesn’t matter that the attorney signed off on this. What matters is that it simply is not an allowable use of TANF funds, and it’s our job in the auditor’s office to point that out when we see it.”

White reportedly also noted that TANF funds cannot be used on any “brick and mortar” construction projects. While White reportedly told Fox News that there’s currently no proof showing Favre knew the funds were being diverted from the state’s welfare fund, he reportedly said that Favre did appear to know that it came from programs “geared towards helping the poor.”

“Based on the documents that have come out publicly, mainly through filings in the civil case, we can see text messages that show that Mr. Favre knew that the money that was being paid out was coming from John Davis, who is the head of the Mississippi Department of Human Services and also coming from the nonprofit that was receiving money from DHS,” White reportedly said. “So, he knows that it’s government money basically, and he knows that the money is coming from the Department of Human Services.”

Former Mississippi Gov. Phil Bryant last week was reportedly subpoenaed for his text messages and other communications with Favre in an ongoing civil suit stemming from the welfare fraud scandal. It is the second time Bryant’s communications have been subpoenaed in connection to the scheme.

Bryant allegedly helped with the effort to get the funding for the new volleyball facility at Southern Miss after he ousted Davis from MDHS.

“Just left Brett Farve [sic],” Bryant purportedly texted Nancy New in July 2019. “Can we help him with his project. We should meet soon to see how I can make sure we keep your projects on course.”

Favre reportedly told Mississippi Today that he and Bryant had never discussed the volleyball facility project or its funding.