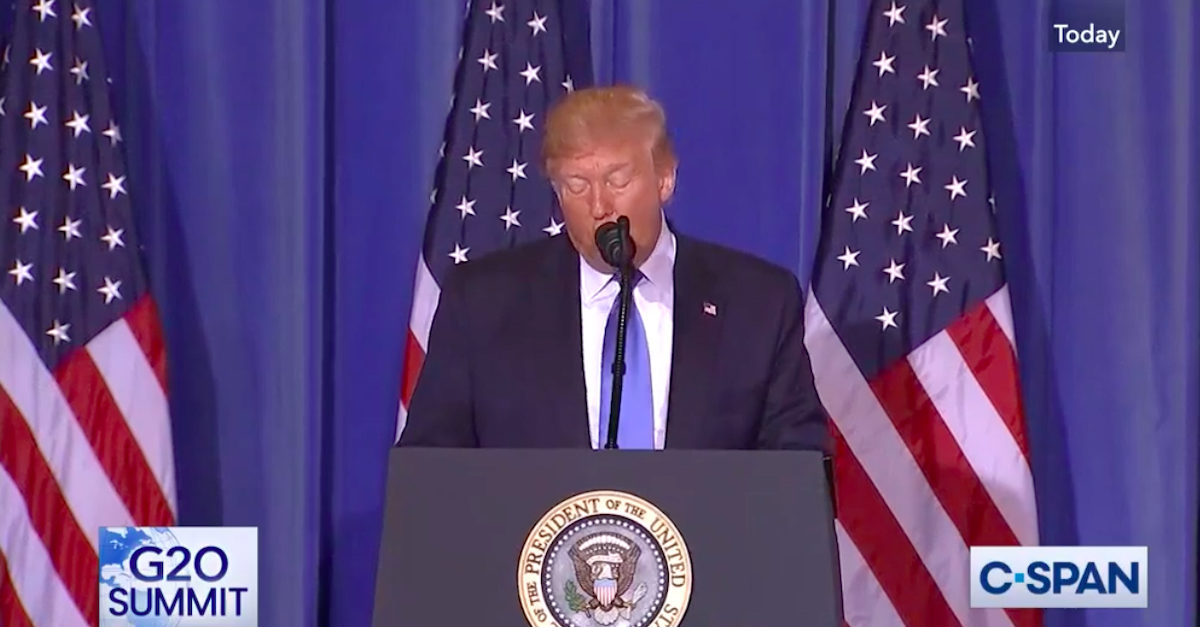 During a press conference Saturday in Osaka, Japan at the close of the G20 Summit, Peter Baker of the New York Times asked President Trump about Russian President Vladimir Putin’s recent comments in which he said Western-style liberalism was “obsolete.”

Based on his response, Trump apparently thought the term, “Western-style liberalism,” which broadly refers to governments comprised of officials who are democratically elected by a populace empowered with individual rights under the law, was a literal reference to American liberals residing on the west coast of the United States.

“Well, I mean he may feel that way. He’s sees what’s going on, I guess, if you look at what’s happening in Los Angeles, where it’s so sad to look, and what’s happening in San Francisco and a couple of other cities, which are run by an extraordinary group of liberal people,” Trump said. “I don’t know what they’re thinking, but he does see things that are happening in the United States that would probably preclude him from saying how wonderful it is,” Trump responded.

Trump continued, saying he agreed with parts of Putin’s assessment of Western-style liberalism, making several references to cities on America’s west coast and agreeing that he did not “want it to spread.”

“I’m very embarrassed by what I see in some of our cities, where the politicians are either afraid to do something about it, or they think it’s votes or I don’t know what. Peter, I don’t know what they’re thinking. But when you look at Los Angeles, when you look at San Francisco, when you look at some of the other cities — and not a lot, not a lot — but you don’t want it to spread. And at a certain point, I think the federal government maybe has to get involved. We can’t let that continue to happen to our cities.”

George Conway immediately jumped on Trump’s seeming naivety, tweeting, “As his lack of comprehension of the words used in [Peter Baker’s] question shows, the President of the United States is breathtakingly ignorant.

Trump also failed to understand another widely used political term during Saturday’s press conference when he was asked about the exchange between Senator Kamala Harris and former Vice President Joe Biden on the issue of “federally mandated busing” which unfolded during Thursday night’s Democratic presidential debate.  Jonathan Karl of ABC News asked the President where he stood on the issue of federally mandated busing.

The phrase “federally mandated busing,” or just “busing,” refers to the practice of desegregating U.S. schools by transporting students previously relegated to segregated classrooms outside their geographical area to racially integrated schools following the Supreme Court’s 1954 decision in Brown v. Board of Education.

Trump again seemed to misunderstand, thinking that the question was simply referring to the current method by which children are transported to school, and even referenced a “very interesting” federal policy his administration plans to unveil in the coming weeks before attempting to quickly switch to another topic.

“And as far as [busing], I will tell you in about four weeks, because we’re coming out with a certain policy that’s going to be very interesting and very surprising, I think, to a lot of people. Jennifer, do you have a question?

However, the President’s curious response led NBC News’ Kristen Welker to follow up on the busing topic, asking if the President saw busing as a “viable way of integrating schools,” and if that related to the policy he had just alluded to.

“Well, that’s something that they’ve done for a long period of time. You know, there aren’t that many ways you’re going to get people to schools. So, this is something that’s been done,” Trump responded.

He continued without ever mentioning race or racially integrating schools.

“In some cases, it’s been done with a hammer instead of a velvet glove. And, you know, that’s part of it.. But this has been certainly a thing that’s been used over the — I think if Vice President Biden had answered the question somewhat differently, it would have been a different result. Because they really did hit him hard on that one. But it is certainly a primary method of getting people to schools.”

When asked in a follow up if busing related to the policy Trump said he planned to unveil, he responded, “It relates to everything we’re doing. And you’ll be hearing about it over the next couple of months.”

Conway again jabbed the President for his apparent lack of understanding, tweeting, “It’s completely bizarre.  Throughout the 60s and 70s there was endless news coverage of political and court battles over busing in cities throughout the nation. You would have had to have lived under a rock to have missed it.”