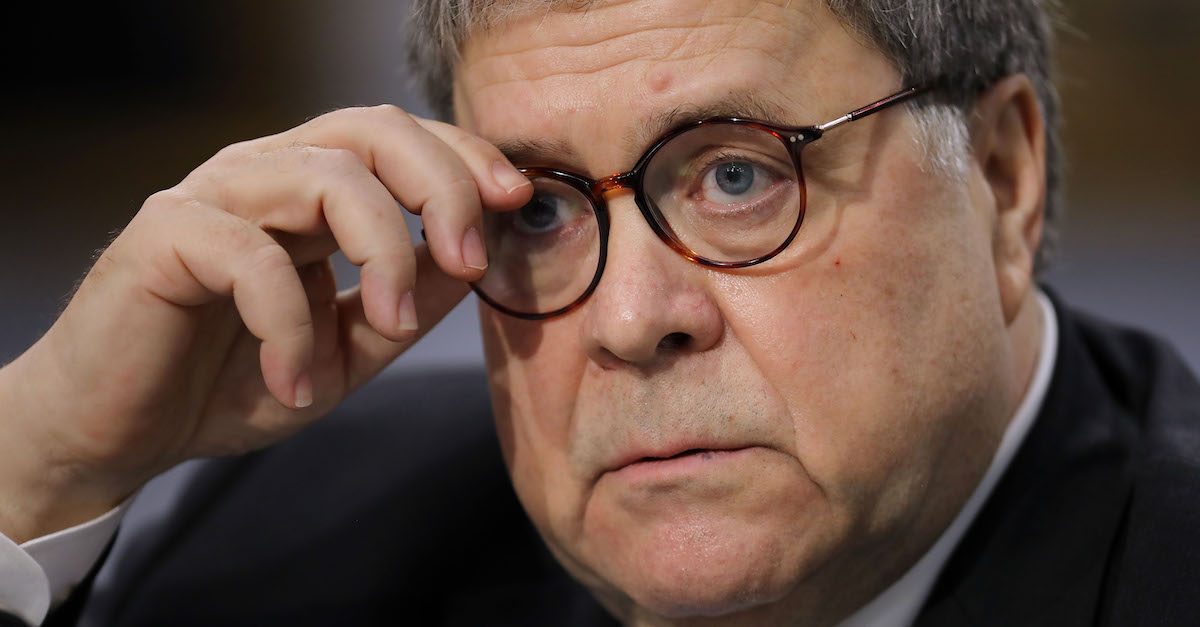 U.S. Attorney General William Barr is planning to publicly release an interim report on U.S. Attorney John Durham’s probe on the origins of the Russia investigation before the presidential election, the New York Times reported Friday. Lawyers and former DOJ officials lambasted the plan, noting that departmental protocol specifically prohibits leveraging an ongoing investigation in any way to impact an upcoming election.

Government officials told Times that “expectations had been growing in the White House and Congress that Mr. Barr would make public, ahead of the election, some kind of interim report or list of findings from Mr. Durham before he completed the investigation” (emphasis ours). A person familiar with the matter added that Barr had wanted Durham to wrap up his probe quickly.

Barr’s plan to release an interim report was revealed hours after criminal prosecutor Nora Dannehy – one of Durham’s top aides assigned to the probe – resigned from the DOJ, reportedly due to concerns over pressure from the attorney general to “deliver results” in advance of November.

“As a federal prosecutor for almost 20 years, I never issued or observed a public report about an investigation,” wrote NBC News legal analyst and former U.S. Attorney for the Eastern District of Michigan Barbara McQuade.

“We either filed an indictment or we closed the investigation. A public report by Durham would violate the very thing for which [former FBI director James Comey] was purportedly fired.”

As a federal prosecutor for almost 20 years, I never issued or observed a public report about an investigation. We either filed an indictment or we closed the investigation. A public report by Durham would violate the very thing for which @Comey was purportedly fired. https://t.co/4NYPCMGIyd

Former Deputy Attorney General Rod Rosenstein in 2017 penned a memo explaining that Comey was fired for his handling of the investigation into Hillary Clinton’s emails and private server. Specifically, Rosenstein harangued Comey for publicly announcing his own conclusions about the investigation and releasing “derogatory information” about the subject of an investigation — meaning Clinton — that had not been brought for prosecution.

“Why is Durham putting out a public report in the first place?” he wrote. “Federal prosecutors either charge people or remain silent.  They don’t write reports about people who they lack the evidence to criminally charge.”

Why is Durham putting out a public report in the first place?

Federal prosecutors either charge people or remain silent. They don't write reports about people who they lack the evidence to criminally charge. https://t.co/SAN8pCdhjn

Different sets of federal laws apply to special counsel, such as Robert Mueller; those laws require reports “explaining the prosecution or declination decisions” reached by people like Mueller.  Under the law, a special counsel’s report remains confidential but may be released by the Attorney General.  Generally, though, career federal prosecutors (who are not special counsel) pursue and decline cases as Mariotti and McQuade have indicated.

The Durham probe has also been under pressure from President Donald Trump, who said the investigation should be used to prosecute his political enemies. Trump repeatedly declared that the probe will vindicate his claims that the Obama administration illegally spied on him, even going so far as to say Barr’s legacy is entirely dependent upon whether top Obama administration officials are charged.

Attorney and legal analyst Jeffrey Evan Gold said that while [Robert] Mueller “stuck strictly to DOJ protocol,” in his investigation, Durham — an appointed U.S. attorney who is not operating under the special counsel statutes — “intends to break it in a hundred pieces.”

“To issue an interim report is against the DOJ policy, and, therefore, appears to be 100% politically motivated. So don’t expect any independence. That’s why his first assistant left yesterday, no doubt. Corruption,” he added.

To issue an interim report is against the DOJ policy, and, therefore, appears to be 100% politically motivated. So don't expect any independence. That's why his first assistant left yesterday, no doubt. Corruption.

The Department of Justice manual for federal prosecutors generally forbids releasing information during the middle of an investigation.  Examples of the various warnings and prohibitions include the following:

Much of DOJ’s work involves non-public, sensitive matters. Disseminating non-public, sensitive information about DOJ matters could violate federal laws, employee non-disclosure agreements, and individual privacy rights; put a witness or law enforcement officer in danger; jeopardize an investigation or case; prejudice the rights of a defendant; or unfairly damage the reputation of a person.

DOJ personnel should presume that non-public, sensitive information obtained in connection with work is protected from disclosure, except as needed to fulfill official duties of DOJ personnel, and as allowed by court order, statutory or regulatory prescription, or case law and rules governing criminal and civil discovery. Other than as necessary to fulfill DOJ official duties, disclosure of such information to anyone, including to family members, friends, or even colleagues, is prohibited and could lead to disciplinary action. Unauthorized disclosures of sensitive personal or proprietary information could lead to criminal prosecution or administrative action.