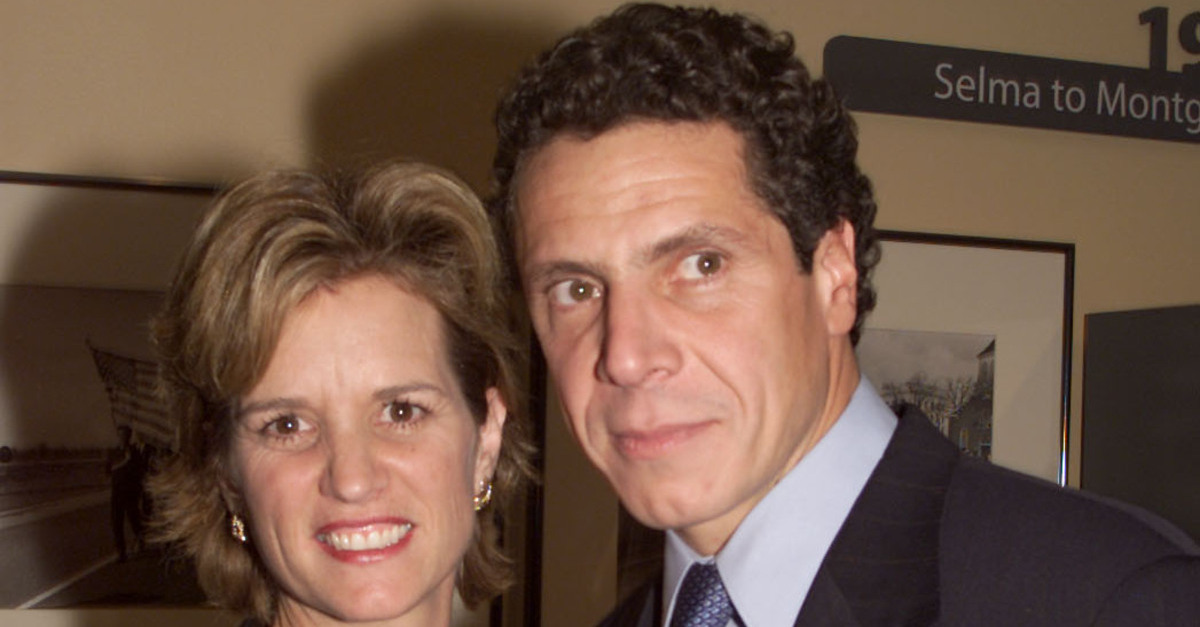 Kerry Kennedy and Andrew Cuomo are seen together on October 9, 2001.

New York Gov. Andrew Cuomo (D) reportedly subjected his former wife Kerry Kennedy to a litany of abuse, some of it physical, years before he was in the governor’s mansion.

According to a Friday report in Vanity Fair by Cuomo’s longtime biographer Michael Shnayerson, the 15-year marriage between Robert Kennedy‘s seventh child (out of eleven children total) and former New York Gov. Mario Cuomo‘s eldest son turned sour due to his “bullying ways and confrontational tactics.”

The latest allegation comes amid a wellspring of claims by women against the Empire State’s Emmy-winning, third-term governor.

Seven women have come forward in recent weeks with allegations of sexual harassment and inappropriate, non-consensual touching. At least one of those accusations was turned over to the Albany Police Department. Dozens of others have described a toxic workplace environment where young women were the constant targets of derision, unwanted attention and an expectation to dress to the nines, in high heels, and to always wear makeup — lest they receive a verbal barb from the governor or his staff about their appearance.

According to Shnayerson, Cuomo’s alleged abuse came to a head in 2001, after his time as HUD secretary in the Bill Clinton administration came to an end and he unsuccessfully ran for governor.

“Kerry was done being ridiculed and belittled,” the author said an anonymous source close to the then-couple told him. “Either Andrew would work on the marriage or he wouldn’t, and the two would divorce.”

Kerry demanded a divorce. They were living separate lives, but for six months Andrew refused to leave the house or respond to her lawyers. On more than one night during that period, Kerry slept in a locked bathroom, according to a source close to the family, who recounted instances of physical abuse. “I’ve been a human rights activist, and for women who have abusive husbands,” Kerry told a friend, “and here I am enduring this abuse.”

The alleged abuse is not specified in the report and the governor’s ex-wife herself is not quoted. The subhead on the article refers to “a hushed allegation of physical abuse.”

Shnayerson’s exposé also cites multiple Kennedys — identified only by their own storied last names — who described Cuomo as never interested in having “fun” or interested in doing anything that wouldn’t be beneficial to his “career.”

“We tried to be gracious, but . . . it turned on his lack of humanity,” one Kennedy sibling said.  “That’s where I started to think, this is a bad guy. He’s just a bully.”

A spokesperson for the embattled governor did not directly address the physical abuse allegation but took broad swipes at the veracity of stories about his former marriage.

“The divorce was over 15 years ago and was tabloid fodder for weeks with all sorts of untrue rumors circulating,” the unnamed spokesperson said. “Time has proven them all false. Andrew is a great father, and his daughters will be the first to say that Kerry and Andrew have been great co-parents — and time showed those who spread the rumors‎ were actually the problem.​”

[Editor’s note: an earlier version of this story briefly contained an image that incorrectly identified Cuomo’s former girlfriend Sandra Lee as Kerry Kennedy. The image was provided to us by subscription service Getty Images with an incorrect caption and with incorrect tags. We regret the error.]