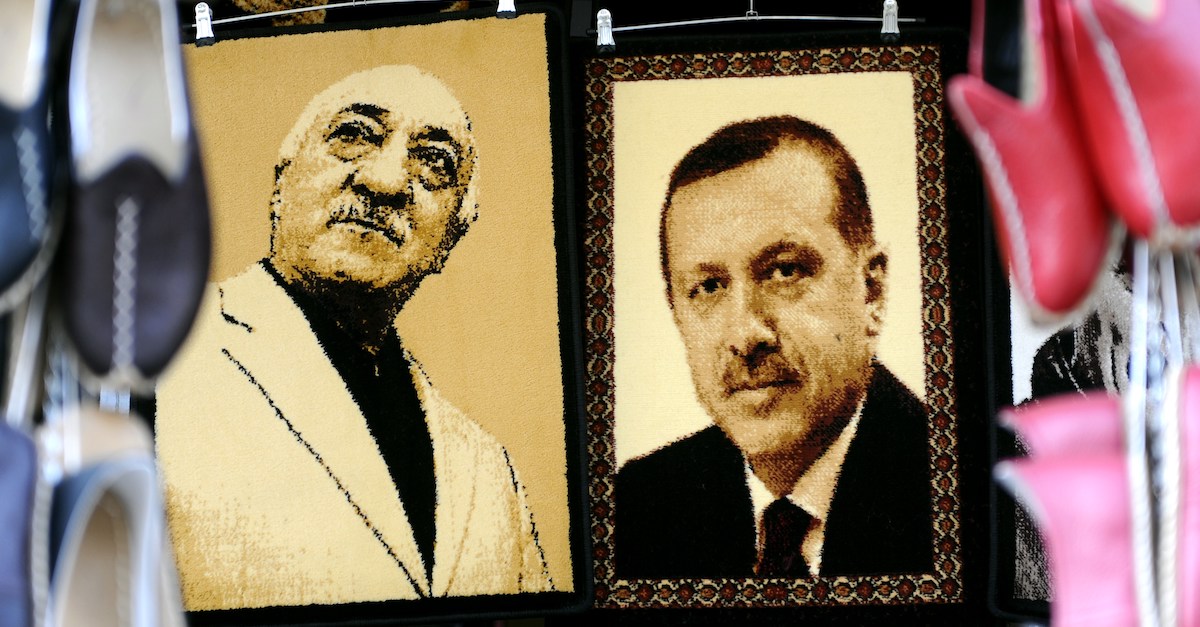 Embroidered images of United States-based Turkish cleric Fethullah Gulen (L) and Turkey’s then-Prime Minister Recep Tayyip Erdogan (R) are displayed in a shop in the Gaziantep market on January 17, 2014 in Gaziantep, near the Turkish-Syrian border.

Outgoing President Donald Trump pardoned away a great many offenses and potential offenses from the federal rap sheet of his ex-National Security Advisor Michael Flynn, using the words “any and all possible offenses” several times. One subset of these involved Flynn’s admitted half-million-dollar stint as an undisclosed foreign agent in service of the Turkish government’s disinformation campaign against Fethullah Gülen, a Muslim cleric living in rural Pennsylvania who is the bane of Turkey’s strongman ruler Recep Tayyip Erdoğan.

For more than $500,000 in his firm’s account, Flynn wrote a 2016 Election Day op-ed in The Hill attacking Gülen and agitated for the cleric’s delivery to Erdoğan—including an aborted plan to kidnap and render him in the dead of night, according to one Wall Street Journal report attributed to ex-CIA director James Woolsey.

“Erdoğan blames Mr. Gülen for an attempted coup in 2016, without producing public evidence for the claim,” Sen. Wyden, D-Oregon, wrote in a 3-page letter to Education Secretary Betsy DeVos. “President Erdoğan has also called Mr. Gülen a terrorist and has repeatedly sought his extradition.”

Normally, foreign intrigue involving a Turkish strongman and a green card holder in Pennsylvania would not involve the U.S. Department of Education, but there is nothing about the Gülen saga that can be called typical. Both Erdoğan and Gülen have tried to expand their international influence through schools. Turkish government actors and their lobbyists routinely vilify Gülenist charter schools in the United States, seeking their defunding and prosecution.

Noting Flynn’s recent pardon, Wyden told DeVos: “These circumstances reinforce my concern that the Trump administration’s policy on Turkey, and in this instance the Administration’s domestic education policy, may be driven by President Trump’s personal interests and those of foreign leaders rather than the interests of the American people.”

A little more than a year ago, Wyden opened an investigation into Trump’s interference with the case of Turkey’s state-run Halkbank, which is currently awaiting trial in connection with what prosecutors call a record-breaking money laundering scheme to Iran. That probe has expanded into one involving an amalgamation of allegedly corrupt dealings between Trump and Turkey’s authoritarian leader.

Peppering all three with extensive questions, Wyden asked the trio of cabinet members to turn over answers and evidence by Dec. 16.

None of the three agencies immediately responded to press inquiries.

Read the letter to Education Secretary Devos below: