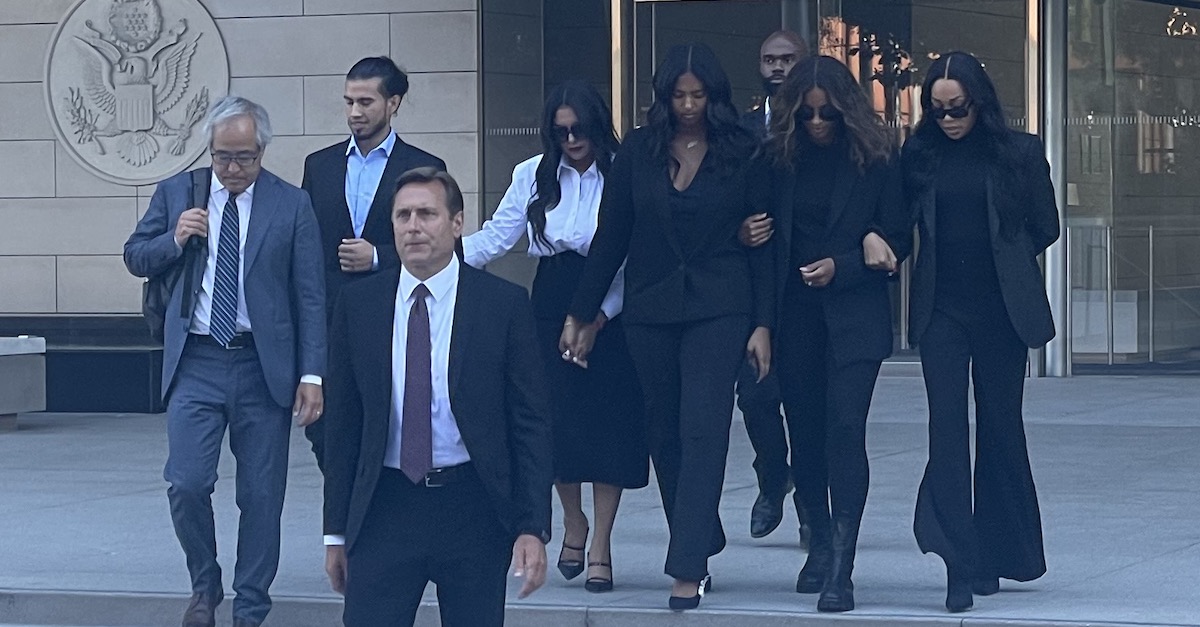 Vanessa Bryant (center in white) leaves court on Monday, Aug. 22, 2022, with her nephew, her daughter Natalia and singers Ciara and Monica. Her lawyer Luis Li is on the left. (Photo: Meghann M. Cuniff/Law&Crime)

Jurors began deliberating about 11:30 a.m. PT on Wednesday in the trial over Vanessa Bryant and Christopher Chester’s lawsuits against Los Angeles County, with a county lawyer describing the case as built not on evidence but emotion and speculation about photos that were deleted long ago.

The sheriff’s deputies and firefighters who responded to the Jan. 26, 2020, helicopter crash that killed Bryant and Chester’s spouses and daughters acted heroically, and they shouldn’t have to worry about who at the command post they sent photos of the scene simply because lawyers might be upset about it two or three years later, Mira Hashmall told jurors.

“People who haven’t done the work aren’t in a place to judge it,” Hashmall said, and first responders “don’t have scripts and outlines like lawyers.”

She also emphasized that Bryant and Chester’s lawsuits have put graphic details about the crash into the public record that Los Angeles County would never have disclosed. The lawyer said, “to claim privacy then put those confidential details in the public? It’s hard to understand.”

Hashmall spoke for about an hour to a full courtroom that included Los Angeles Lakers General Manager Rob Pelinka, who testified as the first witness, his wife, pediatrician Kristin Pelinka, and soccer star Sydney Leroux, who was the inspiration behind Gianna Bryant wearing the number 2 on her jersey. It followed argument Tuesday afternoon from Bryant’s lawyer Craig Lavoie and Chester’s lawyer, Jerry Jackson, who recommended damages totaling $75 million.

But Bryant’s lawyer Luis Li said in his rebuttal to Hashmall on Wednesday that Bryant has never named a specific dollar amount and instead has always asked for justice for Gianna Bryant and Kobe Bryant. The verdict form doesn’t allow for jurors to call for “better training and policies,” Li said, or to say, “Hey, people should own up” and confess to what they did. They can only award monetary damages, and Li said he hopes the jury will see their verdict as a way to “shine a light on Kobe and Gianna’s legacy” that will “allow them to continue helping people across the country,” an apparent reference to a the nonprofit Mamba & Mambacita Sports Foundation.

“She trusts that you will find what is the justice and reasonable number,” Li said.

Hashmall referenced the $75 million figure in her closing, as well as Jackson’s $1 million a year recommendation, questioning how jurors could award any money when they never heard from medical experts about Chester and Bryant’s emotional suffering, which she said is from the loss of their family members, not photos that she said no longer exist. Chester’s wife, Sarah George Chester, and daughter, Payton Chester, Gianna’s teammate, also died in the crash.

Hashmall said “there was a lot of fiction I think that drove some of the thought process in this case,” referring to a report that the deputy who showed the photos at a bar was trying to impress a woman. Off-duty Deputy Joey Cruz had instead showed the photos to male bartender Victor Gutierrez, who’d been his friend for years and was someone he felt he could talk to about his traumatic experience at the crash site, Hashmall said.

“Deputy Cruz made a mistake,” Hashmall said. But, “It was a mistake. It was not a constitutional violation.”

She avoided mentioning the male stranger at the bar whom plaintiff attorneys say surveillance video shows clearly shown photos of the crash by Cruz but said the video shows Cruz was only looking at Instagram during the interactions.

“You see him double-tapping to look at the photos,” Hashmall said, which Bryant and Chester’s lawyers said was actually Cruz zooming in on body parts in a crash photo. She said Guiterrez’s jovial reactions were not him laughing at the photos but him trying to help a struggling friend.

“Victor has a great sense of humor, we saw it here,” Hashmall said. “He saw Cruz struggling,” she added, describing Gutierrez as “a grown man who admitted in a court of law that he cried” the day of the crash.

Those aren’t the actions of someone who would laugh at photos of the crash victims, she said. Hashmall also said the plaintiff attorneys’ focus on deputies and firefighters replacing their phones amid an investigation is “the biggest distraction of all” and dismissed testimony about all the other devices that can store photos but weren’t examined, such as laptop computers and tablets.

Hashmall emphasized that first responders didn’t lug laptops and tablets up the mountain to the crash site, though plaintiff attorneys’ point regarding them is that county employees could have transferred the photos to the devices away from the crash site. She also dismissed a recording of Sheriff Alex Villanueva and Chief Jorge Valdez lying to a Los Angeles Times reporter who asked them about a citizen complaint about photos being shared in a bar, telling jurors, “It doesn’t matter how the sheriff’s personnel dealt with a reporter at a press conference.”

She also avoided questioning the truthfulness of Luella Weireter, who testified that she saw fire Capt. Tony Imbrenda sharing the photos as entertainment during a gala and heard Capt. Sky Cornell make a crass comment about having seen a photo of Kobe Bryant’s body. Imbrenda and Cornell both denied under oath that the discussion about the photos was inappropriate, and Hashmall said the conflicting testimony isn’t because of false statements but because of humans remember situations differently.

“We’re so grateful that she came forward, but she can’t prove the plaintiffs’ claims,” Hashmall said. She said investigations undertaken by the sheriff and fire departments aren’t “the behavior of an agency that’s indifferent,” nor is there any evidence of a widespread practice within the departments of misusing photos of deceased people.

She referenced Capt. Brian Jordan fleeing the witness stand three times during his testimony, saying “I think that was a wild day in court for all of us, let’s be honest” but the main thing to remember is there’s no proof Jordan ever distributed the photos.

Near the end of her argument, Hashmall showed jurors a caption to a photo Bryant posted on her Instagram that read: “They say there are five stages of grief: Denial, anger, bargaining, depression, and acceptance. Well, I’d like to add one more…revenge” and attributed the quote to the Disney character Cruella de Vil.

“Maybe this is just Halloween, or maybe this is her own words. That’s for you to decide,” Hashmall told the jury.

In his approximately 30-minute rebuttal, Li said Hashmall’s argument essentially said that a first responder could send photos of human remains to all 110,000 Los Angeles County employees and it wound’t be considered public dissemination because each recipient is a county employee. He also dismissed her argument that the county has no pattern or practice of inappropriately using photos of deceased people, reminding them of Villanueva’s own words. “You heard the sheriff. This has been going on for decades. Decades. Make it stop,” Li said. He described conflicting testimony about department policies saying, “what you heard was a department in disarray.”

“Should we just ignore the fact that when confronted with facts” the sheriff’s leadership “did not tell the truth?” He urged jurors to review exhibits, listing the numbers of them and seemingly responding to Hashmall’s argument by saying, “They are all exhibits. They’re not lawyers’ words.”

“They’re not cherry picked. They’re what this court ruled is admissible,” Li said.

Li grew increasingly emotional as he spoke, ending by emphasizing the need for justice for Payton Chester, Sarah Chester, Kobe Bryant and Gianna Bryant – “a 13-year-old girl.” He said their verdict is not just for the Bryants and Chesters but “for every family who may face tragedy someday.”

“It’s your turn to stand up and be heard. Your turn,” Li told the jury.