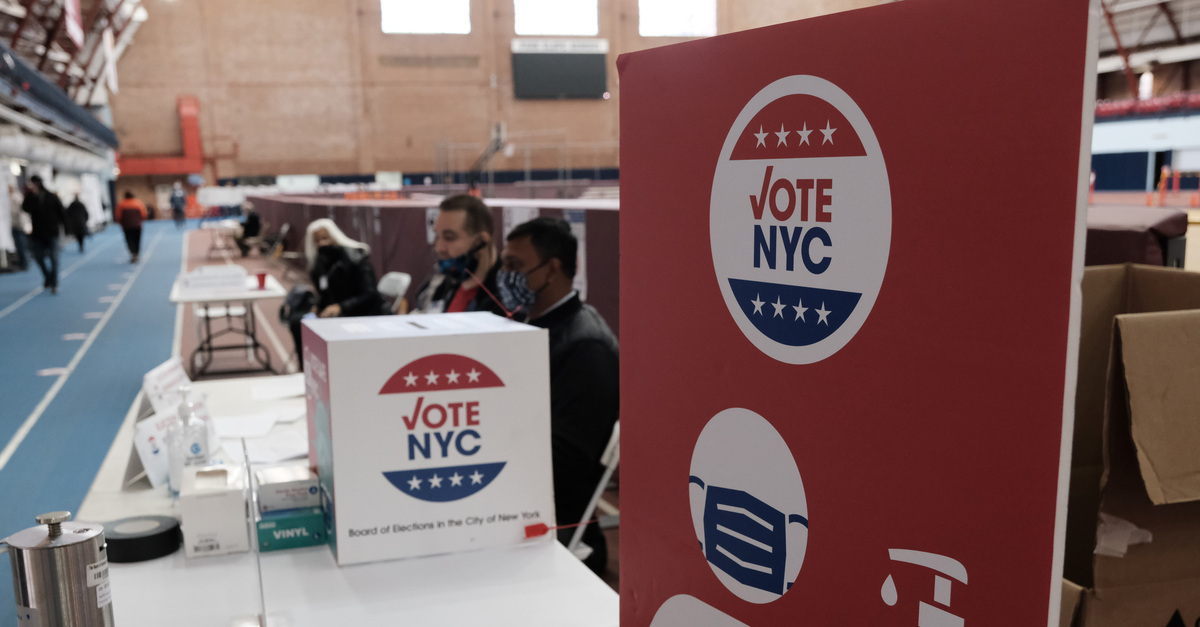 People visit a voting site at a YMCA on Election Day, November 02, 2021 in the Brooklyn borough of New York City.

A lower court judge in Staten Island struck down a recent law that granted the right to vote in local elections to New York City’s estimated nearly million-strong non-citizen population.

State Supreme Court Justice Ralph Porzio, a Republican, struck down the law, saying that it violated the Empire State Constitution. In New York State, the lowest courts are referred to as Supreme Courts.

The ruling purports to permanently enjoin the law from taking effect and prohibits the City of New York from “registering non-citizens to vote.”

The wide expansion of local rights was premised on the notion that local government affects even those who do not have U.S. citizenship but who are citizens of New York City. It became law after being passed by the New York City Council in December. The city’s new Mayor Eric Adams (D) declined to either sign or veto the bill. Monday’s ruling will have no impact on upcoming elections because the measure was not scheduled to take effect until January of next year.

The state’s newly-minted mayor has publicly supported the underlying policy change but also had earlier questioned whether the city council’s efforts would pass muster under state law.

“While I initially had some concerns about one aspect of the bill, I had a productive dialogue with my colleagues in government that put those concerns at ease,” he said after the bill became law, according to CBS News. “I believe allowing the legislation to be enacted is by far the best choice, and look forward to bringing millions into the democratic process.”

The Adams administration ultimately did defend the law in court.

Titled Our City, Our Vote, the measure would have allowed “legal permanent residents and those with work authorizations [to] vote in municipal elections for New York City offices, including the City Council, Mayor, Public Advocate, and Comptroller, as well as ballot initiatives,” according to the campaign’s website. The new law would not have allowed non-citizens to vote in federal or state elections.

The law would have also allowed DREAMers the right to vote in local Big Apple elections.

Staten Island Borough President Vito Fossella led a group of mostly Republican Party plaintiffs who sued New York City over the new law, arguing that it would have changed the way they campaigned. A group of New York City voters also challenged the legislation, saying the shift would have diluted their votes.

“[T]he weight of the citizens’ vote will be diluted by municipal voters and candidates and political parties alike will need to reconfigure their campaigns,” Porzio said, echoing the voters’ concerns.

The judge also agreed with the politicians’ prospective arguments about campaigning challenges, writing: “Though Plaintiffs have not suffered harm today, the harm they will suffer is imminent.”

Response to the ruling has been predictably polarized.

“Today’s decision validates those of us who can read the plain English words of our state constitution and state statutes: non-citizen voting in New York is illegal, and shame on those who thought they could skirt the law for political gain,” City Council Minority Leader Joseph Borelli, a Republican, said in a statement. “Opposition to the measure was bipartisan and cut across countless neighborhood and ethnic lines.”

Laurie Cumbio, a since-former council member who is now the Commissioner of the New York City Department of Cultural Affairs, questioned the impact the law would have on Black voting strength.

“This particular legislation is going to shift the power dynamics in New York City in a major way,” the Democrat from Brooklyn who voted against the law said late last year.

Proponents of the legislation heaped scorn on the judge’s ruling.

“This will once again disenfranchise our neighbors and create barriers to a true, inclusive democracy,” Kristen Gonzalez, a Democrat from Queens who is running for State Senate tweeted in a widely-shared thread about the decision. “With this decision the court is saying that immigrants who contribute to our communities, our economy and the diversity of this city, have no say in issues that affect them most.”

LatinoJustice PRLDEF, a group that intervened in the lawsuit as defendants, is appealing the ruling.

The group’s associate counsel Fulvia Vargas de León addressed the development at a press conference on Monday, saying this law would have bridged “the contradiction between calling so many immigrant workers essential…while denying them a voice in local government that makes vital decisions about their lives.”

Other proponents dismissed the ruling as the predictable consequence of forum shopping.

“The decision to overturn Local Law 11 by this lower court in Staten Island comes as no surprise to us, because the Republican opponents to the law specifically placed their lawsuit in a court they knew would be favorable to them,” Murad Awawdeh, the executive director of the New York Immigration Coalition said in a statement.

The lower court’s order is available below: