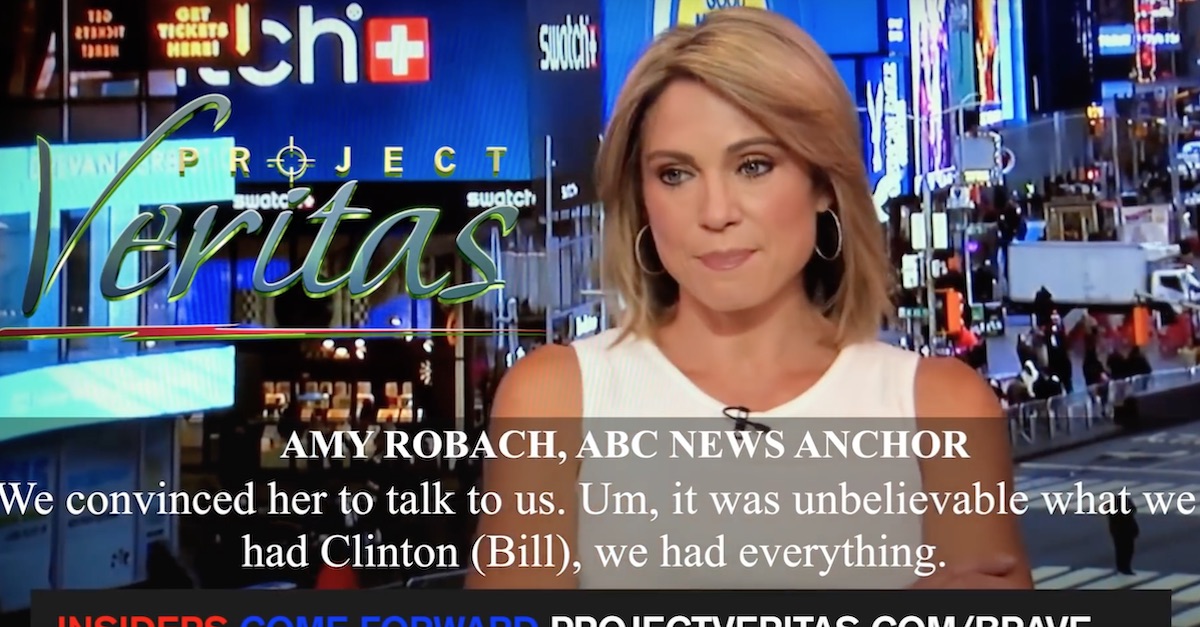 Update, Thursday, Nov. 7: CBS News fired the employee believed to be behind the release of the video.

The Project Veritas video showing ABC News anchor Amy Robach airing grievances that her bosses shot down a story about the Jeffrey Epstein scandal more than years ago has led to an investigation at the network regarding the source of the leak.

The network itself confirmed this in a statement to the Hollywood Reporter on Wednesday.

“We take violations of company policy very seriously, and we’re pursuing all avenues to determine the source of the leak,” said the statement.

The story noted that journalist Yashar Ali first cited unnamed sources who said the person believed to be the leaker is a former employee who now works at CBS News. ABC News doesn’t appear certain as to whether the individual themselves leaked the video or if they shared it with someone else who then handed it to Project Veritas.

As Law&Crime reported on Tuesday, ABC News and Robach both addressed the video unearthed by the conservative activist organization Project Veritas.

Robach said in the video from Aug. 2019 that years ago she had an extensively-documented story on Epstein’s elite global pedophilia and sex-trafficking organization–including information that appeared to implicate former U.S. President Bill Clinton:

But the story didn’t run.

“I tried for three years to get it on, to no avail,” Robach continued. “And now it’s all coming out, and it’s like these new revelations, and I freaking had all of it. I’m so pissed right now. Like, every day I get more and more pissed, ’cause I’m just like, oh my God. What we had was unreal. Other women backing it up.”

“I’ve had the story for three years,” she added. “I’ve had this interview with Virginia Roberts. We would not put it on the air. First of all, I was told, ‘Who is Jeffrey Epstein? No one knows who that is. This is a stupid story.’“

At the time, not all of our reporting met our standards to air, but we have never stopped investigating the story. Ever since we’ve had a team on this investigation and substantial resources dedicated to it. That work has led to a two-hour documentary and 6-part podcast that will air in the new year.

As a journalist, as the Epstein story continued to unfold last summer, I was caught in a private moment of frustration. I was upset that an important interview I had conducted with Virginia Roberts didn’t air because we could not obtain sufficient corroborating evidence to meet ABC’s editorial standards about her allegations. My comments about Prince Andrew and  her allegation that she had seen Bill Clinton on Epstein’s private island were in reference to what Virginia Roberts said in that interview in 2015.  I was referencing her allegations – not what ABC News had verified through our reporting.  The interview itself, while I was disappointed it didn’t air, didn’t meet our standards. In the years since no one ever told me or the team to stop reporting on Jeffrey Epstein, and we have continued to aggressively pursue this important story.