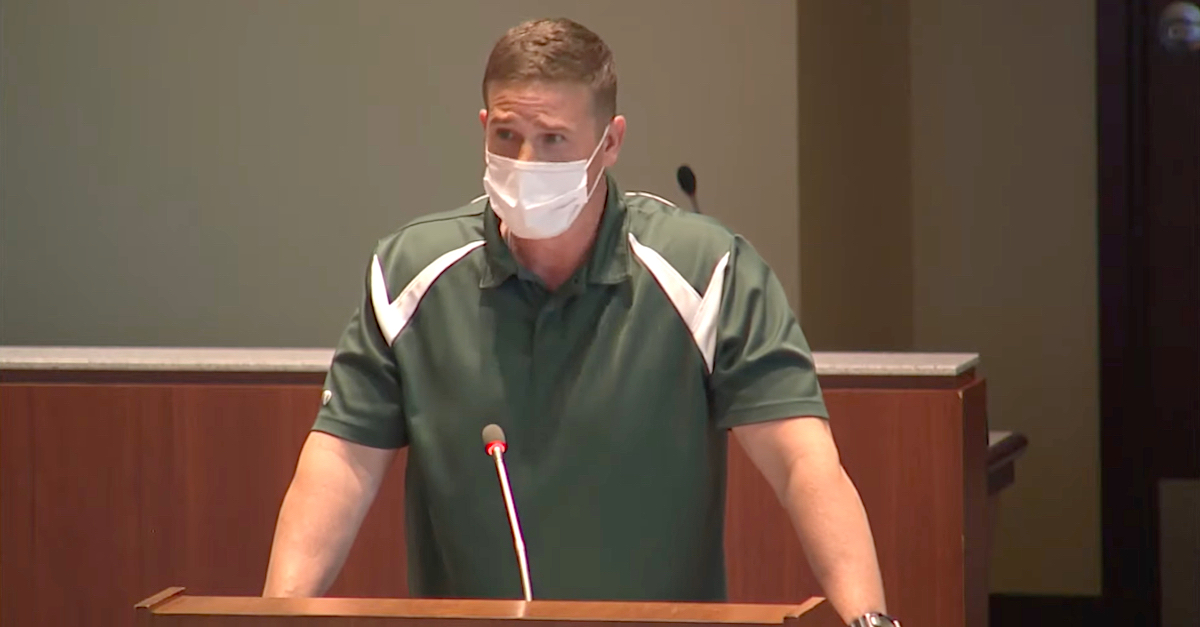 Byron Tanner Cross gives comments at a school board meeting that led to his administrative suspension.

A Virginia public elementary school teacher and football coach is suing his board of education after he says he was put on administrative leave, banned from both school functions and from school property, and ultimately threatened with termination after he spoke out at a public school board meeting against calling students by preferred gender pronouns which conflict with their assigned sex at birth.

Byron Tanner Cross filed a 45-page lawsuit Tuesday against the Loudon County School Board in Ashburn, Va., about 45 minutes west-northwest of Washington, D.C. Interim Superintendent Scott A. Ziegler and Intern Assistant Superintendent for Human Resources and Talent Development Lucia Villa Sebastian are also named as defendants in both their official and personal capacities.

The lawsuit complains of alleged “content- and viewpoint-based retaliation” after Cross spoke out at a public school board meeting “based on his expertise and experience” and “with the hope of informing the public and assisting the Board’s evaluation” of a proposed policy on gender pronouns. Cross said his opinions were based “on his sincerely held philosophical and religious beliefs and years of experience as an educator.”

The widely shared speech is transcribed in the lawsuit as follows:

My name is Tanner Cross. And I am speaking out of love for those who suffer with gender dysphoria.  60 Minutes, this past Sunday, interviewed over 30 young people who transitioned. But they felt led astray because lack of pushback, or how easy it was to make physical changes to their bodies in just 3 months. They are now de-transitioning. It is not my intention to hurt anyone. But there are certain truths that we must face when ready.  We condemn school policies like 8040 and 8035 because it will damage children, defile the holy image of God. I love all of my students, but I will never lie to them regardless of the consequences. I’m a teacher but I serve God first. And I will not affirm that a biological boy can be a girl and vice versa because it is against my religion. It’s lying to a child. It’s abuse to a child. And it’s sinning against our God.

The lawsuit says Cross was called into a meeting two days later and eventually told he was being investigated for “conduct that has had a disruptive impact on the operations” of his elementary school. A later email confirmed that Cross’s “comments to the School Board” were the sole reason for the adverse action; it alleges that “significant disruption” occurred after Cross’s comments — “including multiple complaints and parents requesting that Mr. Cross have no contact with their children because of his comments.”

Cross’s lawsuit is framed as a case which “is not about how schools should treat students who struggle with gender dysphoria.”

Rather, “[i]t is about whether public schools can punish a teacher for objecting, as a private citizen, to a proposed policy, in a forum designed for the purpose of considering whether to implement such policies, where the policy would force him to express ideas about human nature, unrelated to the school’s curriculum, that he believes are false,” the lawsuit says.

The topic for discussion at the board of education meeting was a series of proposed policy changes which would “allow students to use a chosen gender identity program different than the pronoun consistent with their biological sex,” the lawsuit says. Another proposed change would “allow students to participate in . . . extra-curricular activities, including sports, based on their gender identity rather than their biological sex (i.e., allow biological boys to use locker rooms and bathrooms alongside biological girls).”

NPR, citing school spokesperson Wayde Byard, reported that the proposed policies “would align district policy with the Code of Virginia and the Virginia Department of Education’s guidelines for the treatment of transgender students.” The Code of Virginia requires model policies to be promulgated regarding gender identity, but it explicitly states that its provisions “do not include athletics.” The school board’s policy does.

The document then launches into a nearly two-page discussion entitled “Mr. Cross’s Philosophical and Religious Beliefs.”

“Mr. Cross believe that, because of the difficulty of assessing matters of gender identity and the long-term irreversible consequences of certain treatments for transgender-identifying people, including hormone replacement therapy and sex-reassignment surgery, children should not be encouraged to undertake social or medical transition because of their inability to assess long-term consequences,” the multi-paragraph section of the lawsuit says in part.

Cross says “parents have a fundamental right to control the upbringing and education of their children,” that teachers can “assist” parents, and that school policies must address this “fundamental right.”

Elsewhere, Cross asserts that “educators have free speech and religious freedoms” and that “all education policy” must protect those “fundamental freedoms.” And he says he “believes, based on scientific evidence, that there are only two anatomical sex presentations (except in very rare scientifically demonstrable medical circumstances).” He says “God immutably” created “male and female” and that saying otherwise “would violate biblical commands against dishonesty and lying.”

Cross is asking for a declaration by the court that the defendants violated his rights, full reinstatement to his normal job, an injunction ordering the removal of disciplinary letters involving the matter from Cross’s personnel file, and orders prohibiting the defendants and other officials from preventing Cross from — or punishing Cross for — “expressing his views on gender-identity education policy.”

Attorneys with the conservative and Christian-aligned Alliance Defending Freedom are acting as Cross’s counsel.

A series of declarations by five school staffers is attached to the lawsuit.  They all say they’re afraid to speak out about the proposed gender pronoun policy for fear of retaliation.

Cross’s lawsuit is not dissimilar from a case by Ohio college professor Nicholas Meriwether. Meriwether teaches, among other things, courses involving the “History of Christian Thought.” The federal Sixth Circuit Court of Appeals in Cincinnati in late March ruled in Meriwether’s favor after a battle with administrators over preferred gender pronouns. The Sixth Circuit decried the “derisive and scornful” university administrators who exhibited “religious hostility” during the professor’s disciplinary discussions.

“Purportedly neutral non-discrimination policies cannot be used to transform institutions of higher learning into “enclaves of totalitarianism,'” the judges noted, quoting the famous case of Tinker v. Des Moines (1969). But the Sixth Circuit also explicitly noted that a previous decision, Evans-Marshall v. Board of Education of Tipp City (6th Cir. 2010), explicitly limited First Amendment protections for “the in-class curricular speech of teachers in primary and secondary schools.” The Sixth Circuit clarified in Meriwether’s case that “college and university professors” enjoy freedoms that “schoolteachers” do not.

Virginia, where Cross’s case is filed in state courts, sits in the Fourth Circuit. And Cross is not alleging federal claims.