Beth and Paul Werking Must Pay for Son's Pornography: Judge 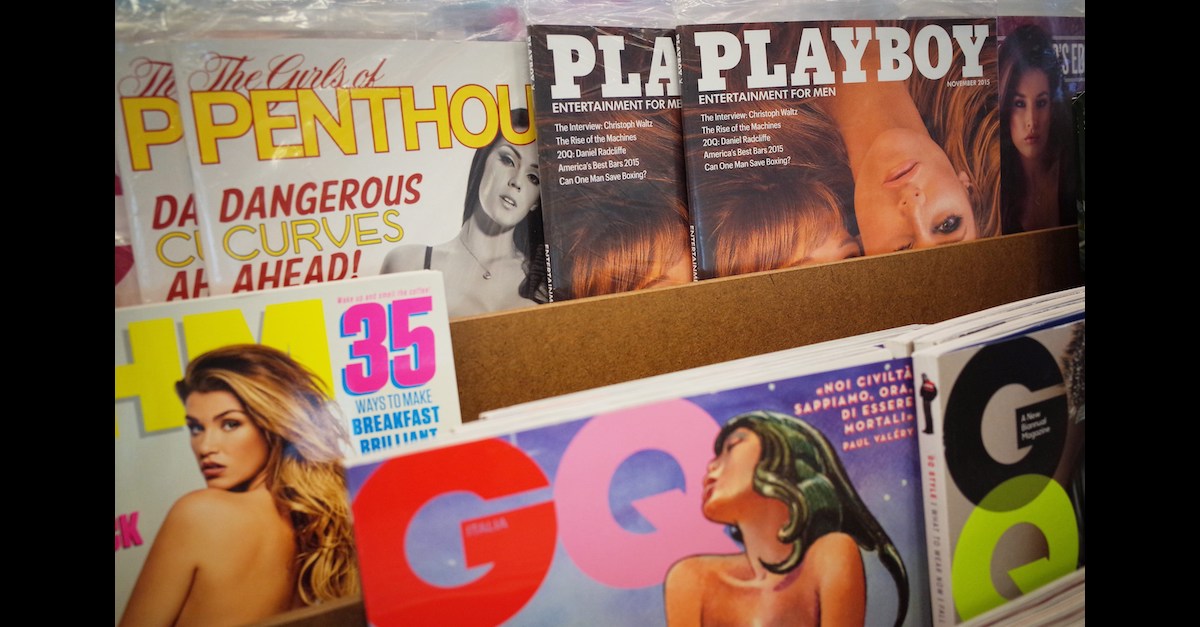 November 2015 issues of Playboy magazine are seen on the shelf of a bookstore in Bethesda, Maryland in an October 13, 2015 file photo.

A federal judge in Michigan has ordered a mother and father to pay damages after disposing of their adult son’s vast pornography collection following the son’s divorce.

According to court records, the son lived “rent free” at his parents’ home after living “on the street for a while.”  But he swiftly moved out of his parents’ house “at the request of local law enforcement” after what court records suggest was a violent spree involving “throwing furniture.”  He left his assortment of sexually explicit subject matter behind — and his parents disposed of it.  The cache, according to a court valuation, “consisted of 2,289 adult films” dating from the mid-1970s to the mid-2000s.

In October 2016, after divorcing his wife, David Werking moved in with his parents, Paul and Beth Werking David brought personal property with him, including a large collection of pornographic material. But by August of 2017, tensions between David and his parents were running high. On August 23, 2017, David called the police after an “incident,” and the officers asked David to leave the home for at least three days. When he left, David left much of his property behind; he asked his parents to return the property to him multiple times over the following months. But on January 1, 2018, Paul informed David that any property that had not yet been returned to him had been destroyed, including the pornographic material.

I find your whole attitude toward women to be very disturbing. Women are not objects for you to masturbate with, they are people created by God just as you were and should be treated with respect and dignity. I don’t think that you have been listening to me, so let me make this very clear. I do not possess your pornography. It is gone. It has been either destroyed or disposed of. I may well have missed a few items that are now in your possession but, at this point, if you don’t have it, it is gone. Ditto for your sex toys and smutty magazines.

The email continued by saying that the parents allowed their son to move back home after the son’s wife endured “ten years” of alleged “abuse.”  The wife apparently kicked the son to the curb, and he was living “on the street for a while” when the parents allowed him back in, the emails indicate.  The parents asked the son not to bring sexual material with him.  He did so anyway, according to the emails:

We were not surprised that you lied to us about having pornography because you lied to us every day about other things for the entire ten months that you lived with us. However, we were amazed at the magnitude of the lie. We counted twelve moving boxes full of pornography plus two boxes of “sex toys” as you call them. We began that day the process of destroying them and it took quite a while to do so.

The father indicated in the messages that he feared some of the material contained “child pornography.”  He also told his son that such material could result in “very serious jail time in excess of 20 years.”  But the son’s attorney indicated to the court that “[n]one of the Property was illegal in nature.”

The son snapped back via another email.

The son said he also “needed it” with his ex-wife “around.”

“Meanwhile for me there are college girls out there waiting to be made into women,” the son also wrote.

He then demanded that his material be returned.

And a lawsuit followed.

The son demanded compensation and filed a lawsuit alleging but “one claim,” the judge noted: “statutory conversion under Michigan law.”  The case ended up in federal court on diversity jurisdiction.  The son had moved to Indiana, and when residents of different states sue one another, their cases can be heard in certain circumstances — generally when the controversy involves more than $75,000.

The parents argued that their son presented no valid claim and that the case should be summarily dismissed. The judge disagreed and viewed the case as a rather clear-cut matter involving a straightforward application of the Michigan law at the center of the dispute. The judge concluded:

The judge disagreed with the parents’ arguments that (1) they were their son’s landlord for a time; (2) that their son assumed the risk that the material would be jettisoned; (3) that the son abandoned the property; and (4) failure to mitigate. A paragraph discussing each of those alleged defenses dispatched the arguments one by one.

Earlier in the case, the son’s attorney, Miles L. Greengard of Grand Haven, Mich., wrote as follows with regard to the parents’ actions:

While it is likely that that Defendants believed that, in their conversion of the property, they were doing their son a favor – misguided love is not an affirmative defense. This Court should find accordingly, and order a damages hearing so that Plaintiff can be made whole.

Despite Defendants Paul Werking’s self-professed noble intentions, because of these personal uses of the destroyed and converted Property, Defendants maintain liability under Michigan’s statutory conversion statute and the court’s [previous] holding[s].

Earlier court papers indicate that the parents were clearly “upset” by the collection of smut which was hoisted onto their property by their son.  But those altruistic concerns — which the son’s attorney duly noted — fell by the wayside in court.

After concluding that the son’s arguments prevailed as a matter of law, the judge ordered discovery to determine the precise value of the so-called smut.  What resulted was a formal valuation prepared by Dr. Victoria Hartmann — who describes herself as holding a “Doctorate degree in Human Sexuality (D.H.S.)” and a “Ph.D. in Human Sexuality with an emphasis on Clinical Sexology” — as well as being the person in charge of a sex museum in Las Vegas.  The valuation considered the following:

An attorney for the parents did not immediately respond to a Law&Crime email questioning the couple’s possible next steps.