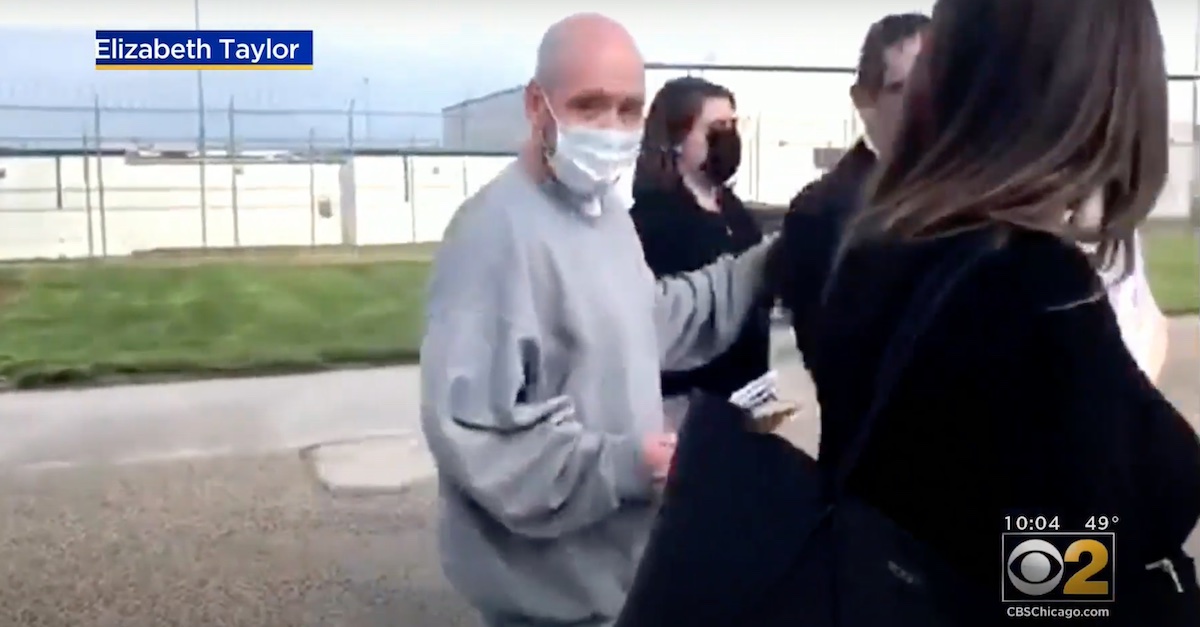 Kenneth Smith is seen walking out of prison in a screengrab from a WBBM-TV broadcast.

An Illinois man walked out of prison Thursday after being tried three separate times for a murder he has insisted all along that he did not commit. Three federal judges on the Seventh Circuit Court of Appeals agreed that the evidence prosecutors used to convict him was fraught with lies and inconsistencies.

The man, Kenneth Smith, now 45, was convicted of murder after a botched stick-up job at a Burrito Express restaurant ended with kitchen staff chasing two suspects out of the building and with one of those staff members being shot and killed. Police zeroed in on Smith and a group of alleged accomplices: Justin Houghtaling, Jennifer McMullan, and David Collett. Houghtaling’s statements to police and subsequent actions would prove troublesome.

When police caught Houghtaling and subsequently interviewed him in Omaha, Nebraska, while he was bound for California on a bus, Houghtaling shifted his story of what happened in the shooting to comport with the narrative officers fed him. He also misidentified the murder weapon as an automatic pistol. The police believed a revolver was used. Police promised him leniency in return for going along with the tale.

Houghtaling pleaded guilty and testified against McMullan. Four months after McMullan was convicted, Houghtaling wrote her a letter: “let me start by saying I’m sorry about what I did to you at your trial.
I know I lied and I was bogus. To be honest — and I was bogus.”

Houghtaling refused to testify against Smith. Prosecutors read his testimony from McMullan’s trial into Smith’s. The U.S. Supreme Court outlawed that practice in Crawford v. Washington, so Smith received a second trial.

The Seventh Circuit described what happened during that affair:

This time, on direct examination, Houghtaling testified that he and Smith attempted to rob the Burrito Express and that Smith fired the gun. But on cross examination, Houghtaling recanted and asserted that the testimony he had just given was false, except for the fact that he was wearing a green jacket that day. He averred that he was being forced to lie under oath to convict Smith because the state would revoke his plea agreement if he did not do so. As a result of this recantation, Houghtaling later pleaded guilty to perjury and received a 5 1/2-year sentence. The state impeached Houghtaling with his Omaha confession, and the jury found Smith guilty.

An Illinois appellate court tossed the second conviction due to what the Seventh Circuit called “evidentiary issues.”

Then came a third trial.

Following what the 7th Circuit called a “well-worn playbook,” the state called Houghtaling — again. This time, Houghtaling “flatly denied” that either he or Smith played a role in the killing. Some of Houghtaling’s final version of events was backed up by security footage from other businesses. Prosecutors again played Houghtaling’s Omaha confession to impeach him.

“Note that Houghtaling denied seeing anyone injured or bleeding, and while he claimed to have heard shots, he did not observe that anyone ‘had been shot,'” the Seventh Circuit said. “He never directly said that he saw Smith kill Briseno.” 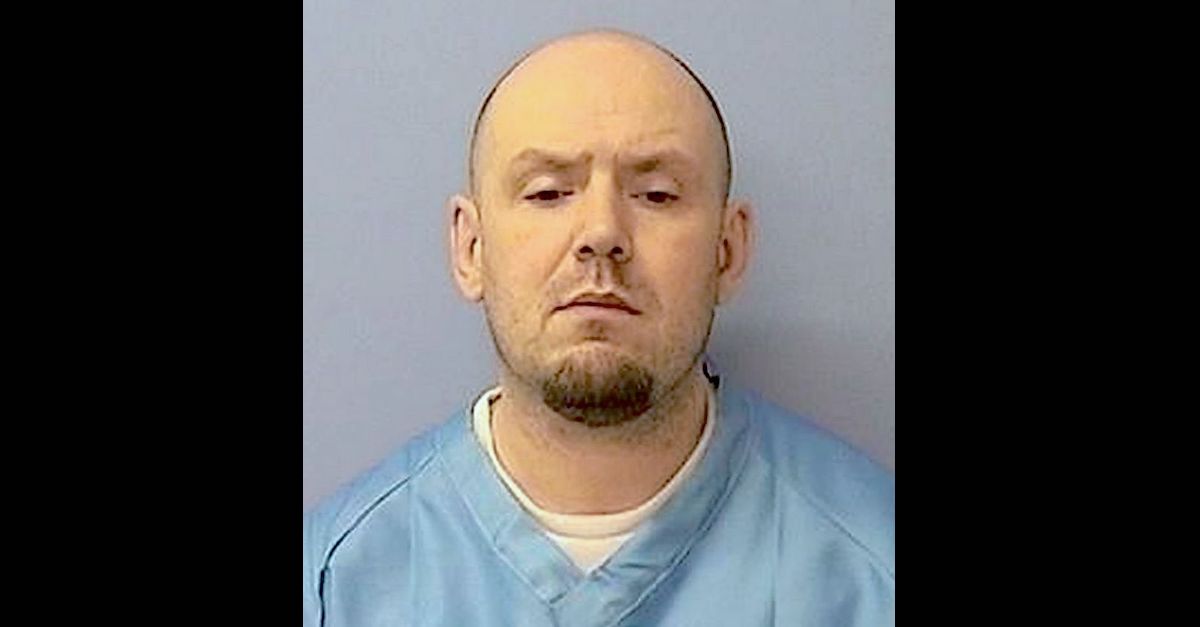 Kenneth Smith is seen in a jail mugshot.

A surviving victim, Eduardo Pardo, testified that a jacket owned by Smith “looked like” a jacket worn by one of the attackers. But Pardo’s description at the time of the incident “differ[ed] significantly” from what Smith’s jacket actually looked like, the Seventh Circuit noted. “When Smith sought to impeach Pardo by pointing out these discrepancies, Pardo stated that he did not remember how he described the jacket to police that night,” the court said. The trial court barred Smith from posing further questions to a police detective about the jacket’s description.

But Smith wasn’t done. He told the jury at his third trial that another group of suspects actually committed the killing. One member of that group had by that time confessed to multiple people, including to her mother, to a childhood friend, and to several police officers — though the confession contained the wrong date for the crime. Two other members of the group also subsequently confessed that they were the ones involved and that Smith wasn’t. They recanted their confessions at trial and said they were all lying. The jury believed the alternate suspects told the truth about lying but didn’t believe Houghtaling was telling the truth about lying. And the jury didn’t believe any of the mess added up to reasonable doubt. The jury convicted. As the Seventh Circuit noted:

The state had no physical evidence linking Smith to the crime. There were no fingerprints from him or Houghtaling at the scene. No DNA evidence. And no blood that could be linked to Smith or Houghtaling. But at the conclusion of his third trial in 2012, after twenty-one hours of deliberation, the jury found Smith guilty of attempted armed robbery and firstdegree murder. The court imposed a sentence of 67 years on the murder count and a concurrent sentence of seven years on the robbery count.

It is difficult to overturn a conviction, the Seventh Circuit noted — while citing several pages of case law about how federal courts are supposed to defer to state jury verdicts.

“Jackson v. Virginia holds that criminal convictions must stand unless ‘upon the record evidence adduced at the trial no rational trier of fact could have found proof of guilt beyond a reasonable doubt,'” the court noted. “[W]e must find the decision not just wrong, but well outside the boundaries
of permissible outcomes.”

Yet the court did just that.

“Houghtaling’s Omaha confession . . . is riddled with holes,” the court said in a lengthy analysis which tore apart the state’s only real piece of evidence. It also ripped the notion that the surviving victim described Smith’s jacket.

“The state had no physical evidence linking Smith to the crime. There were no fingerprints from him or Houghtaling at the scene. No DNA evidence. And no blood that could be linked to Smith or Houghtaling,” the court said elsewhere.

The court also noted that no one saw either Smith or Houghtaling with blood on their clothes the night of the shooting or the next day. But one member of the other group of suspects — the large group who variably confessed to friends, family, and in some cases the police before they recanted — was covered in blood.

The state tried to argue that the crime scene wasn’t bloody in order to comport with the witnesses’ observations of Smith and Houghtaling. The circuit court rubbished that assertion as pure hogwash.

“One has only to look at the rather grisly photos in the record of the crime scene and of the
final outfit worn by [the murder victim] on March 6, 2001” to see the bloody mess, the court reminded the state.

“Our point here is not to adjudicate the [the other group’s] guilt,” the Seventh Circuit wrote. “The evidence implicating them is relevant because it casts a powerful reasonable doubt on the theory that Smith and Houghtaling were the robbers that night. Houghtaling’s inconsistencies take on a special significance in light of the [other group] — evidence that builds a narrative largely free from the holes that fill Houghtaling’s confession.”

The court held that a litany of evidence errors “deprived Smith of his right to a fair trial” and that Smith met the high burden necessary for a federal court to intervene in a state court’s conviction.

“[W]e find that the trial evidence failed to support Smith’s conviction beyond a reasonable doubt and that the Illinois Appellate Court was not just wrong, but unreasonable, in holding otherwise,” the Seventh Circuit wrote.

The federal appellate court ordered Smith released after nineteen years. (The lower district court held that Smith should remain incarcerated while the state figured out whether or not to re-try him.)

On Thursday, Smith walked out of jail.

His attorneys with the Chicago law firm of Jenner & Block were there waiting.

“Freedom!” he told his mother on the phone.

“We are grateful that, at long last, the justice system recognizes Ken Smith’s innocence, ending his almost two-decade nightmare,” attorney David Jimenez-Ekman said. “The evidence of Ken’s innocence is overwhelming, and it is a tragedy it took so long for the justice system to acknowledge that. Ken looks forward to the hard and bittersweet task of rebuilding his life. But the nightmare continues for Jennifer McMullan, also innocent but languishing in prison, and the family of Raul Briseno, whose real killers remain unpunished.”

Speaking to the local papers, current McHenry County, Ill. prosecutor Patrick Kenneally criticized the federal appeals court’s decision. He said he was “increasingly distressed” that “remote judges, years and decades later” have substituted their judgement for that of a jury of “ordinary citizens” whose job it was to weigh the “credibility” of witnesses.

Jimenez-Ekman saw it differently — because the jurors never heard the full story.

“The courts ruled those jurors were repeatedly told only half the story, and the facts those jurors never heard doomed the state’s case,” he said. “I am very proud of my team’s work and of Jenner & Block’s pro bono commitment that allowed us to fight for Ken without charge for more than 15 years.”

Read the appellate opinion below.