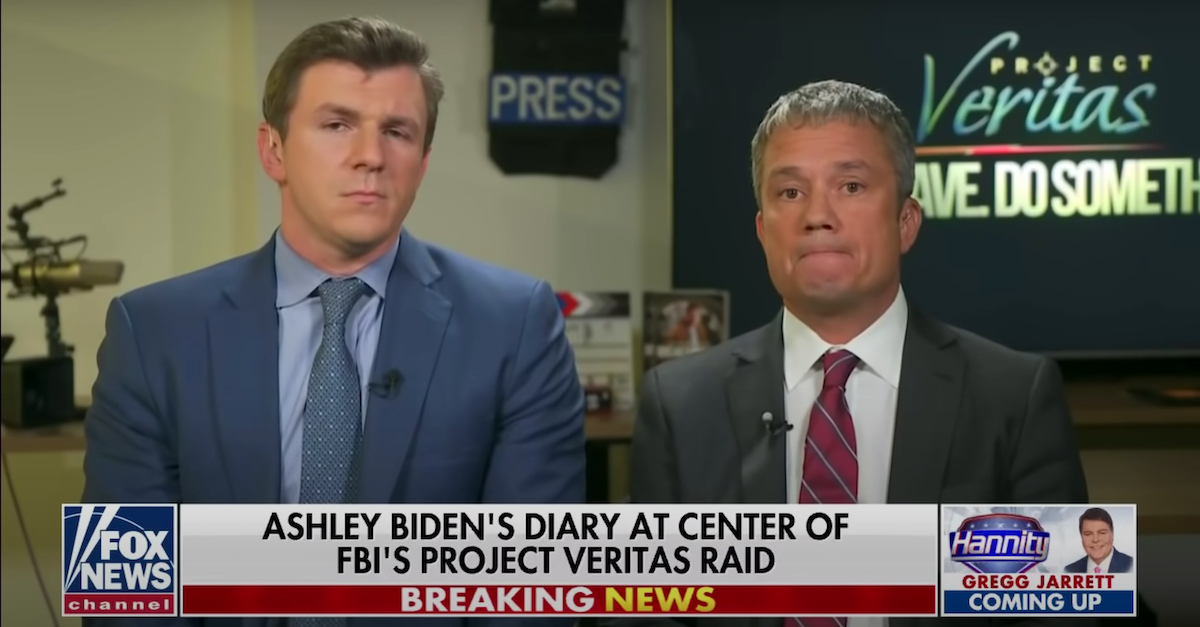 Federal prosecutors late Wednesday pushed back against accusations of malfeasance lodged by lawyers from Project Veritas in connection with search warrants served on Microsoft for data pertaining to the group, its leader, and its associates.

As Law&Crime previously reported, lawyers for Project Veritas wrote to a judge on Tuesday to accuse federal law enforcement authorities of engaging in an alleged end-around of the appointment of a special master — a flank maneuver with implications for the First Amendment rights of journalists and of the press to operate, according to that organization. The special master, a retired federal judge, was tapped to review the fruits of search warrants executed at the homes of Project Veritas founder James O’Keefe and several of his associates. The warrants are part of an attempt by the DOJ to ascertain whether Project Veritas or its associates engaged in criminal conduct when they received what has been purported to be copies of a diary allegedly written by Ashley Biden, the president’s daughter. The well-trodden back story has been sufficiently recapped by this website previously.

No charges of wrongdoing have been officially lodged against O’Keefe, his associates, or Project Veritas as of this date, and those parties vehemently deny that they did anything illegal in connection with the escapade. Rather, those associated with the right-leaning organization say they agreed to be the recipients of the alleged diary. It is relatively well-settled law that journalists are free to publish with impunity information illegally obtained and henceforth provided by external third-party individuals — so long as the journalists didn’t play a role in illegally obtaining the data, received the data lawfully, and the data involves a matter of public concern. In short, journalists can’t steal, but they can publish what others may have stolen. The DOJ apparently wants to know whether laws were broken in connection with the possible theft and transfer of the alleged diary. Pointing to the item in question, Project Veritas has countered that the DOJ has spent both inordinate and exorbitant resources on the matter and that its efforts are stifling the free speech and free press rights of the organization.

The special master’s job is to sort out any privileged material, such as attorney-client communications and — potentially, as Project Veritas claims — materials that are protected under the privileges associated with the First Amendment. The material thus segregated by the special master would thereafter kept away from the eyes of federal prosecutors and not be made part of any criminal case the DOJ may be building.

The special master was tasked to review materials obtained from the search warrants served personally on O’Keefe and his associates.  The Tuesday letter by Project Veritas asserts that federal agents secured separate and heretofore undisclosed search warrants for data housed by Microsoft in connection with accounts owned by Project Veritas associates. Those separate and distinct warrants, Project Veritas’s attorneys argued, were not subject to the special master’s review process. That inflamed Project Veritas, whose counsel swiftly penned a bombastic missive to Judge Torres to pillory the allegedly nefarious, allegedly sneaky, and allegedly unconstitutional conduct of the federal government in using a back-door channel to look at materials that might have been segregated from the front-door special master review process.

Federal prosecutors, who declined to defend their actions when asked to do so by Law&Crime on Tuesday, retorted on the official record Wednesday night by arguing that Project Veritas has no right to balk at the process utilized thus far — and especially not at this stage in the proceeding.

Federal prosecutors wrote that the remedy sought by Project Veritas is not ripe for review right now.

“Instead, the Movants can raise these issues if there is an indictment filed charging them in connection with the investigation, or they can seek civil relief if they believe they have a claim of a constitutional or statutory violation that provides for individual rights of action against the Government,” the letter indicates.

The letter by the DOJ claims that an “ongoing grand jury investigation” remains pending in the matter.

Prosecutors said Project Veritas had no legal right to “restrain the Government from accessing, reviewing, or using data obtained pursuant to duly authorized subpoenas” for data obtained from Microsoft via warrants that were separate and distinct from those associated with the personal raids. The Microsoft data was obtained, prosecutors said, via warrants that “were issued after a Magistrate Judge determined that there was probable cause to believe that the accounts contained evidence or instrumentalities of a federal crime.”

“Contrary to the Movants’ allegations, there is nothing improper about the Government’s use of judicially-authorized warrants and other legal process during the pendency of a covert grand jury investigation,” the feds continued.

Project Veritas’s attorneys have asserted that the processes employed by the feds are an “assault” on the First Amendment rights of journalists to receive and to publish material obtained by others — even if it was obtained illegally.

Again, prosecutors countered that Project Veritas was overstating the nature of the rights it claims to hold.

In other words, the issue is rather moot, the feds told Judge Torres.

Prosecutors admitted they received and presumably reviewed “subscriber data obtained by subpoena and non-content and content information for email accounts obtained pursuant to the Stored Communications Act.” They said there is no legal mechanism for Project Veritas’s counsel to demand “pre-indictment discovery regarding the process used to review the materials referenced by the Movants, the identities of those who participated in that process, and the identities of third parties on which other legal process may have been served in the course of the investigation.”

Prosecutors then said Project Veritas was asking for concessions “indistinguishable” from those already rubbished by another judge in litigation surrounding a set of search warrants served on Rudy Giuliani and Victoria Toensing in April 2021.

The Government did not have any obligation to disclose to the Movants the existence of the legal process referenced in the motion. Each warrant, order, and subpoena referenced by the Movants was subject to a judicially-authorized non-disclosure order. Of course, the Movants, like any subjects of a federal grand jury investigation, would like to know about every investigative step the Government is taking during the course of a criminal investigation, but that is not the law, for good reason.

The DOJ pointed to the law of secrecy surrounding grand jury proceedings — such as those apparently occurring here — as yet another reason why Project Veritas should not be allowed the relief it requested. Prosecutors noted that the affidavit which led to the original search warrants in the Project Veritas matter remains sealed.  They further asserted that they did not deceive the court, as Project Veritas alleged, because the methods of the investigation were previously provided in ex parte communications to the federal bench — those are meetings between a judge and only one side in the case.

In response to the government’s filing, Paul Calli, a lawyer representing Project Veritas, said the “DOJ’s hubris is staggering.”

“Its filing reduces to, ‘no one[] can tell us what to do and there’s nothing anyone can do about it,'” Calli added.

By failing to deny it when he had the chance, Mr. [Robert] Sobelman [a DOJ attorney] apparently confessed: 1. He never informed the district judge that through a secret investigation, he had already acquired the material the court sought to protect in order to preserve fairness and the appearance of fairness; and 2. He reviewed the privileged material without a filter team already and let [J]udge Torres believe the process the court put in place had not been violated.

The SDNY is investigating a non-crime and utilizing tactics on a journalist that it uses for terrorists.

“[A] free and independent press is vital to the functioning of our democracy,” Garland’s memorandum states.  “The Department of Justice will no longer use compulsory legal process for the purpose of obtaining information from or records of members of the news media acting within the scope of newsgathering activities.”

Calli told Law&Crime that, in his opinion, those words should apply to DOJ tactics in this case.

“So where are you, Mr. Garland?” Calli asked rhetorically. “And why are you letting your prosecutors defile America’s free and independent press? The world is watching.”

Calli echoed some of these same concerns in a Thursday response to the government sent to Judge Torres.

Read the DOJ’s letter below:

[Editor’s note: this report has been updated to include reaction from attorney Calli and the subsequent response letter.]