Federal Judge Concludes Trump Lied About Voter Fraud ‘Both in Court and to the Public,’ Applies Crime-Fraud Exception to Docs Held by John Eastman 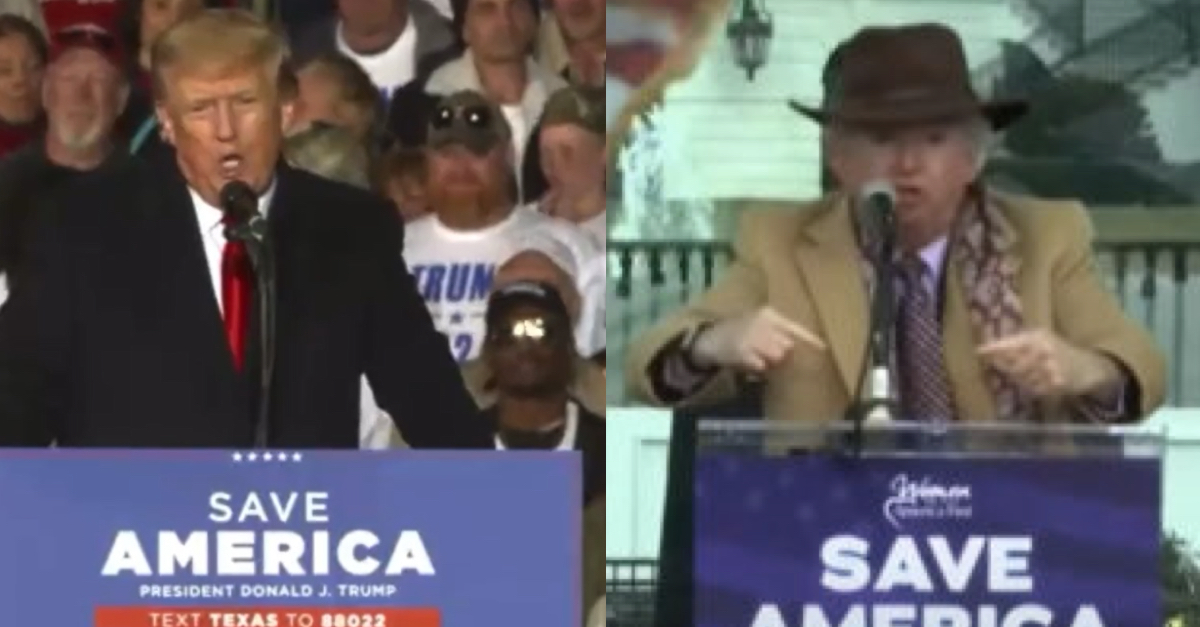 Former President Donald Trump knew that voter fraud numbers that he cited were false but continued to tout them “both in court and to the public,” a federal judge ruled on Wednesday.

On top of ratcheting up the pressure on the 45th president, the decision means that Trump’s lawyer John Eastman cannot shield 33 of the documents for which he sought protection. Eight of those were ordered released under the crime-fraud exception.

In a watershed ruling in March, U.S. District Judge David O. Carter made his first application of the crime-fraud exception over files that Eastman wanted to keep from the committee on the ground that he and former President Donald Trump “more likely than not” committed two felonies: obstruction of an official proceeding and conspiracy to defraud.

The most recent ruling delves into the latter alleged offense, providing new details about what Trump knew about his discredited claims of voter fraud and what he told the public — and the courts — instead.

In both rulings, Carter’s findings were not under a criminal standard but rather a lower civil threshold of a document dispute. Any criminal fallout from the rulings would come from the discretion of any prosecutors investigating Trump’s conduct connected to Jan. 6, 2021, such as those from the Justice Department or from the Fulton County District Attorney’s office in Georgia.

As an immediate consequence of Wednesday’s rulings, Eastman keeps having to turn over more files from his Chapman University account.

Carter previously called two emails a “close call” and concluded they shouldn’t be released, but the judge changed his mind in Wednesday’s ruling, saying “additional context now before the Court, particularly with respect to Georgia, confirms that those emails fall within the ambit of the crime-fraud exception.”

The emails and two others show that Eastman and other Trump lawyers suggesting “that—irrespective of the merits—the primary goal of filing is to delay or otherwise disrupt the January 6 vote.”

“In one email, for example, President Trump’s attorneys state that ‘[m]erely having this case pending in the Supreme Court, not ruled on, might be enough to delay consideration of Georgia,’” Carter wrote. “This email, read in context with other documents in this review, make clear that President Trump filed certain lawsuits not to obtain legal relief, but to disrupt or delay the January 6 congressional proceedings through the courts.”

Four other emails show Trump and his lawyers trying “to press false claims in federal court for the purpose of delaying the January 6 vote.”

“The evidence confirms that this effort was undertaken in at least one lawsuit filed in Georgia,” the judge wrote.

“The emails show that President Trump knew that the specific numbers of voter fraud were wrong but continued to tout those numbers, both in court and to the public. The Court finds that these emails are sufficiently related to and in furtherance of a conspiracy to defraud the United States,” Carter continued.

On December 4, 2020, President Trump and his attorneys alleged in a Georgia state court action that Fulton County improperly counted a number of votes including 10,315 deceased people, 2,560 felons, and 2,423 unregistered voters. President Trump and his attorneys then decided to contest the state court proceeding in federal court, and discussed incorporating by reference the voter fraud numbers alleged in the state petition. On December 30, 2020, Dr. Eastman relayed “concerns” from President Trump’s team “about including specific numbers in the paragraph dealing with felons, deceased, moved, etc.” The attorneys continued to discuss the President’s resistance to signing “when specific numbers were included.” As Dr. Eastman explained the next day: Although the President signed a verification for [the state court filing] back on Dec. 1, he has since been made aware that some of the allegations (and evidence proffered by the experts) has been inaccurate. For him to sign a new verification with that knowledge (and incorporation by reference) would not be accurate.)

Immediately after this passage, the judge added: “President Trump and his attorneys ultimately filed the complaint with the same inaccurate numbers without rectifying, clarifying, or otherwise changing them.” He followed up that sentence up with a footnote citing the American Bar Association’s Model Rules of Professional Conduct.

In total, the judge ordered 33 of 562 emails released.