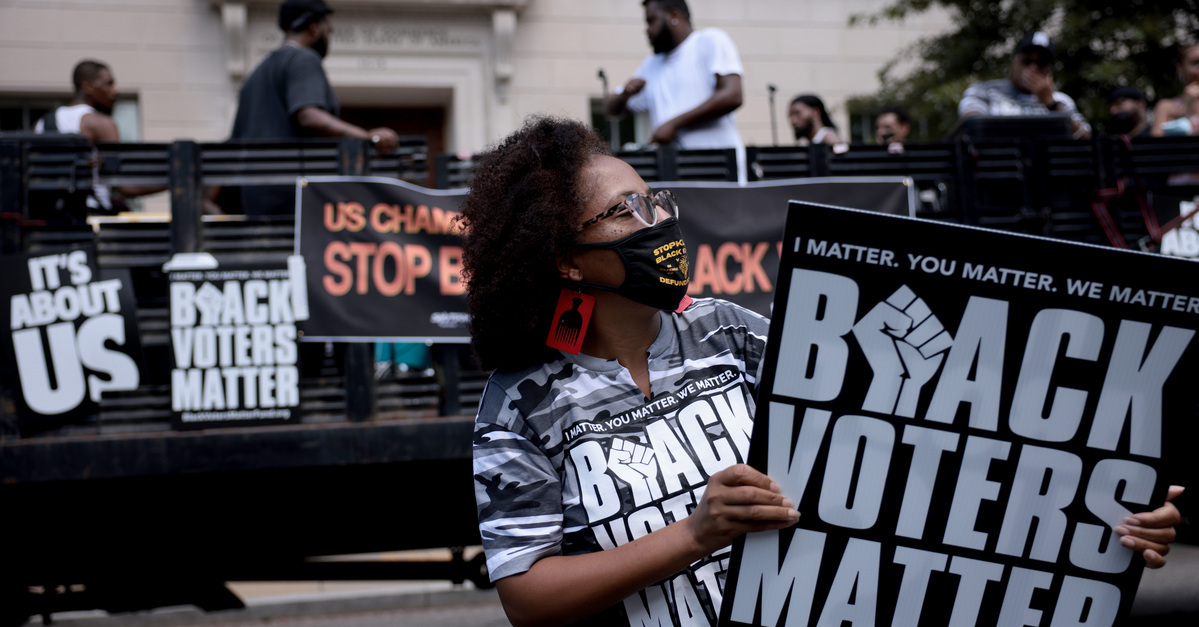 A federal appeals court affirmed the dismissal of a lawsuit filed by Black Voters Matter over Georgia’s requirement that voters pay for their own stamps on absentee ballots. The court not only rejected the group’s case alleging that the stamp cost amounted to an unconstitutional “poll tax,” but even went so far as to say that the claims “border on the frivolous.”

The State of Georgia gives voters the option to vote via absentee ballot. However, voters who choose to exercise that option must either pay for the 55-cent stamp in order to have their ballots delivered to the county election office, or bring their votes to a county drop box themselves.

The 24th Amendment of the United States Constitution prohibits any conditioning of the right to vote in a federal election on payment of a poll tax. A 1966 Supreme Court case held that “[a] State’s conditioning of the right to vote on the payment of a fee or tax violates the Equal Protection Clause of the Fourteenth Amendment.” Although many states legislated explicit poll taxes prior to the 24th Amendment (ratified in 1964), such taxes were expressly unconstitutional afterward. Fees associated with voting are often challenged as de facto poll taxes.

Advocacy group Black Voters Matter filed a lawsuit in April 2020, challenging Georgia’s rule that absentee voters must purchase their own postage from the United States Postal Service. At the district court level, the plaintiffs lost. U.S. District Judge Amy Totenberg (a Barack Obama appointee) ruled that even given the difficulties of in-person voting during the COVID-19 pandemic, the price of a stamp does not amount to an unconstitutional poll tax.

A three-judge panel of the the U.S. Court of Appeals for the 11th Circuit has now affirmed Judge Totenberg’s decision in a 15-page opinion. The panel was composed of two Donald Trump appointees — Circuit Judges Elizabeth Branch and Britt Grant, and one George H.W. Bush appointee, Circuit Judge Edward Earl Carnes.

Judge Branch wrote for the unanimous panel, holding that the stamp price is not a tax violating the 24th Amendment, but rather, a simple cost for service. Not all fees collected by government are taxes, reasoned Branch, likening the stamp price to the cost for other services.

“For instance,” the judge wrote, “a citizen who receives electricity from the  Tennessee Valley Authority is not being penalized or taxed when she pays her monthly electricity bill.”

“Similarly,” Branch continued, “a citizen who hands over money to ride Amtrak is not paying a penalty or a tax, but a fare.”

The court also dispensed quickly with the plaintiffs’ argument that the stamp cost amounted to an equal protection violation, as it discriminates against voters who do not vote in person. The court ruled that the price of stamps is nothing other than a cost incidental to voting.

“While voting often involves incidental costs like transportation, parking, child care, taking time off work, and—for those who choose to vote absentee by mail—the cost of a postage stamp,” wrote Branch, “those incidental costs do not mean that Georgia has imposed an unconstitutional poll tax or fee on its voters.”

Judge Branch even added a footnote at the conclusion of the court’s opinion, noting the court declined to impose sanctions despite an assessment that “the Plaintiffs’ claims border on the frivolous.”

Black Voters Matter did not immediately respond to a request for comment. The Georgia Board of Elections declined to comment, citing pending litigation.