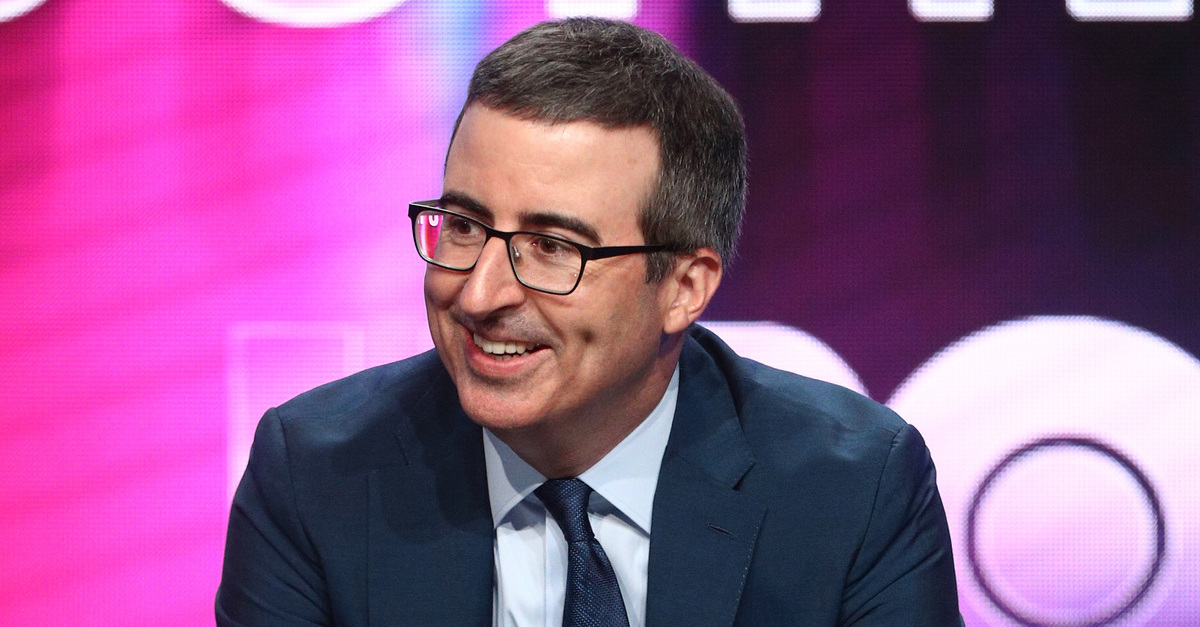 The makings of a great late-night segment have begun, as the production company behind John Oliver’s show filed a federal lawsuit against the U.S. Citizenship and Immigration Services (USCIS) for “unlawfully” refusing to provide documents about the agency’s years-long use of Lee Greenwood’s God Bless the U.S.A.

Partially Important Productions, the company that produces the HBO show Last Week Tonight with John Oliver, sued USCIS on Friday, Aug. 13 for allegedly violating the Freedom of Information Act (FOIA). According to the complaint, the production company filed a FOIA request in January 2020 seeking documents related to settlement of a dispute over possible copyright infringement of the song. The complaint said USCIS still hasn’t provided any documents.

The complaint describes a situation thick with irony: “USCIS played [a video] for many years at naturalization ceremonies across the country [and] used, without authorization, Mr. Greenwood’s song, God Bless the USA as part of the video’s soundtrack.” The government’s unauthorized use of the song then led to “costly settlement negotiations” between the Department of Justice and Greenwood.

In the complaint, the production company plaintiff references a lengthy report titled, “The Role of Intellectual Property in U.S. Homeland Security,” conducted by a government contractor. That report, linked here, explains that Greenwood had been performing at a naturalization ceremony where coincidentally, a staff member noticed that a video of Greenwood singing God Bless the USA was used. The staffer “discovered later that USCIS had not obtained usage rights.”

Greenwood’s representatives and USCIS then went directly to settlement negotiations “based on [the agency’s] many years of copyright infringement.” The report further allows that “[t]his infringement was unintentional, because no attorney or other person with intellectual property expertise ever reviewed it.”

The report continues, outlining what’s at stake when Greenwood’s song is played without authorizations for thousands of newly-minuted American citizens. First, the government’s failure to review the public materials distributed to the nearly 2,000 immigrants a day who are naturalized is simply a bad look for the U.S.; calling this kind of error “embarrassing,” the report asserts that this “can be damaging for the agency’s public image.” Furthermore, “[t]he fact that one of DHS’s key missions, through ICE, is to investigate and prosecute the theft of IP only exacerbates these adverse impacts.”

There’s more than just bad PR at stake, though.

“Additionally,” the report continues, “copyright infringement brings the effects of financial risks through settlement actions, enforcement actions, and the costly litigation that can be brought against an agency in violation.”

Those effects of government sloppiness, embarrassing though they might prove, are precisely why John Oliver’s show is interested. From the complaint, the plaintiff production company explains that it “seeks to shine a public light on USCIS’ taxpayer funded settlement with Mr. Greenwood for alleged copyright infringement.” The complaint goes on to give the court some background on the show:

Each episode of Last Week Tonight comments on recent news events and does a “deep dive” on a complex or underreported sociopolitical topic, such as the death penalty, net neutrality, civil asset forfeiture, pay-day loans, the Mueller report, Brexit, and corruption in state legislatures. Last Week Tonight’s coverage of certain issues has led to real-world effects and policy changes.

The company asks that the court order USCIS to fulfill the nearly two-year-old request for documents, and to award attorneys fees for USCIS’ alleged violation of FOIA.

Attorneys for Partially Important Productions and USCIS did not immediately respond to requests for comment.