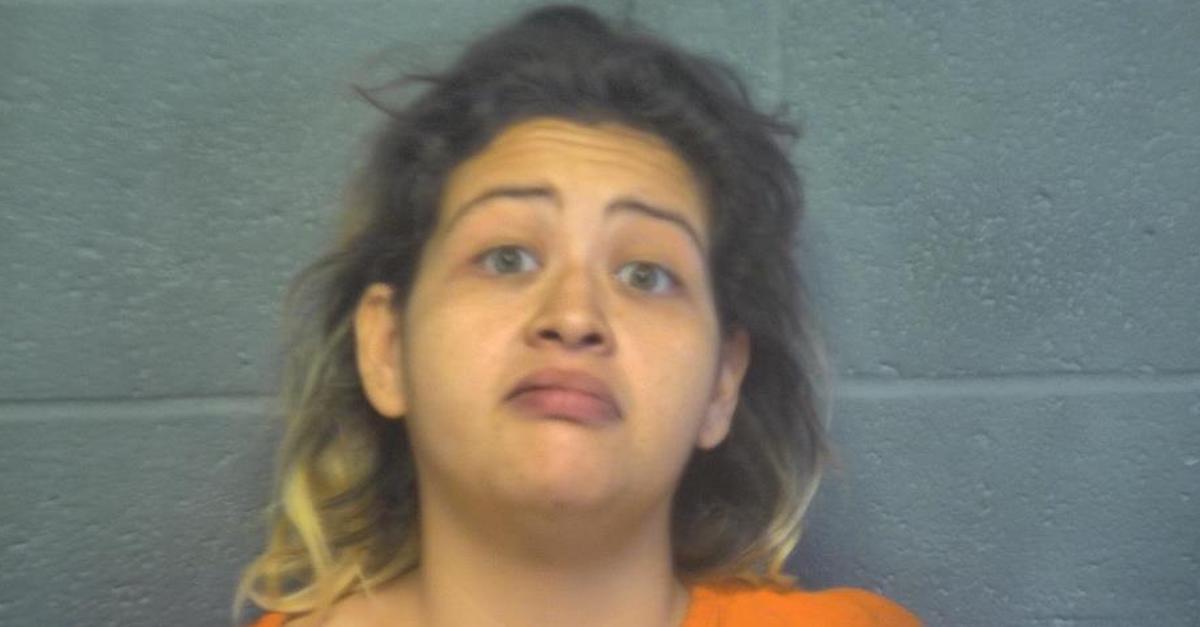 A woman in Oklahoma City is behind bars this week after law enforcement authorities say she brutally killed an 11-year-old son by stabbing the boy to death inside of their home.

Carina Romero, 27, was taken into custody Sunday and charged with one count each of first-degree murder, death of child by injuring, and torturing and maiming, records reviewed by Law&Crime show.

According to a press release from the Oklahoma City Police Department, officers on Sunday at approximately 4:30 p.m. responded to a 911 call regarding a disturbance at a residence located in the 800 block of SE 50th Street. Upon arriving at the scene, first responders say they were met by Carina Romero, who was standing out in front of the home. The responding officers said Romero had “blood on her person” and was holding a 2-year-old child in her arms who was “covered in blood,” per a report from The Oklahoma City Sentinel. Romero approached the officers and allegedly said something which “indicated that someone had killed a child inside of the residence,” per the release.

In an odd twist, police say she then grabbed the toddler, turned around, and went back inside of her home. She allegedly closed and locked the door, refusing to let the responding officers inside of the house. Police reportedly blocked off the street as they tried to get Romero to come outside.

Due to the unusual circumstances presented by Romero’s statements and subsequent behavior, police said the officers on the scene broke down her door and forced their way into her home. Once inside, police discovered “what appeared to be a deceased child inside of the residence.” Police then took her into custody on suspicion of murder. She was booked in the Oklahoma City Detention Center where she is currently being held without bond.

The toddler, who police say was able to get through the ordeal unscathed, was removed from the home and placed in the custody of Child Protective Services.

While police say they are waiting to release the identity of the young victim, Oklahoma City CBS affiliate KWTV reported that it was an 11-year-old male who is believed to be Romero’s son. Police did not provide any possible reason as to why Romero may have attacked her son.

Per the Sentinel, neighbors told police they could hear screaming coming from inside of Romero’s home for several minutes before she went outside and greeted police with the infant in tow. After officers forced their way into her home, she “continued to scream outside for several minutes, walking up and down the street with her child covered in blood,” the report states.

The Sentinel further reported that bystanders who had gathered in the area told police they overheard Romero saying that her husband was to blame for her son’s murder. However, investigators reportedly told the newspaper that evidence collected from inside the apartment “disputed these statements,” specifically noting that the cuts on Romero’s hands were “consistent with using a knife to stab a victim several times.”

Tyler Risenhoover, one of Romero’s neighbors, told KWTV that tragedies of this nature do not usually happen in their neighborhood.

“It’s sad,” Risenhoover reportedly said. “For the last 20 years, the block hasn’t been like this down here, you don’t see much of this so it’s kind of nerve wracking.”

Authorities emphasized that the investigation into the child’s death is ongoing and urged anyone with information on the case to contact the Homicide Tip Line at 405-297-1200.