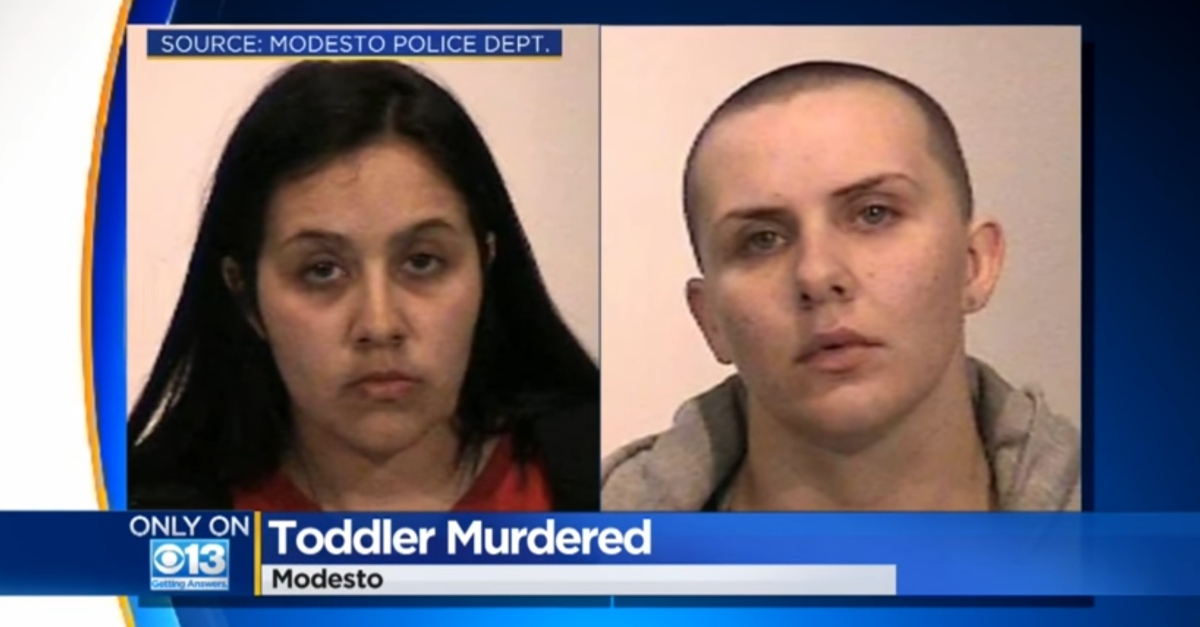 A woman and her fiancée received sentences of 22 years-to-life for killing her 3-year-old son. Prosecutors say Connie Marie Escamilla, 29, and  Kylie Mykaela Ann Beasley, 25, previously blamed each other for Connie’s son Gilbert dying from serious injuries, but they pleaded guilty in December to a count each of second-degree murder, and torture.

Prosecutors say authorities were called to the couple’s Modesto home in 2017 about a child not breathing. Gilbert was unresponsive. First responders took him to a hospital, and personnel there found him to be terribly injured.

“Hospital personnel documented extensive physical injuries to the toddler including severe burn marks on his legs, bruising and abrasions over his entire body and various fractures,” the D.A.’s office said. “They also diagnosed internal damage consisting of bleeding on the brain, a bruised lung and bruised liver. Gilbert was flown to Valley Children’s Hospital in Madera for further treatment but died the next day.”

The couple claimed Gilbert got some of his injuries in a car accident, but they gave different accounts on when this happened, prosecutors said. There were also no records on such an accident, the D.A.’s office said. Defendant Escamilla and Beasley also fabricated other stories on what happened to the young boy, authorities said.

“The pair further blamed his severe leg burns on hot water spilling him on, but doctors determined that could not have caused the injuries they saw,” prosecutors said. “Additional excuses included falling off his bed, blaming an unknown male whom law enforcement was never able to locate and negligence by the medical professionals who administered CPR to the unresponsive child. When told that Gilbert had died, both Escamilla and Beasley admitted to being untruthful and blamed the other for the child’s injuries and death. They were both arrested and charged with Gilbert’s murder.”

Escamilla and Beasley waived two years of earned custody credits as part of their plea hearing on Dec. 16.

“How can you let someone hurt your child?” Escamilla’s sister April Marie Garza told KOVR in a March 6, 2017 report. “She could’ve done anything to stop it. I don’t know what she was thinking or what this girl did.”

She said she believed her sister began to change after moving to California and meeting Beasley. Connie, who also had a 7-year-old daughter who was half-siblings with Gilbert, refused to send pictures of the children, Garza said.