‘Where Did You Dump Lori’s Body?’: Alabama Man Convicted of Capital Murder in Death of Woman Who Went Missing in 2006 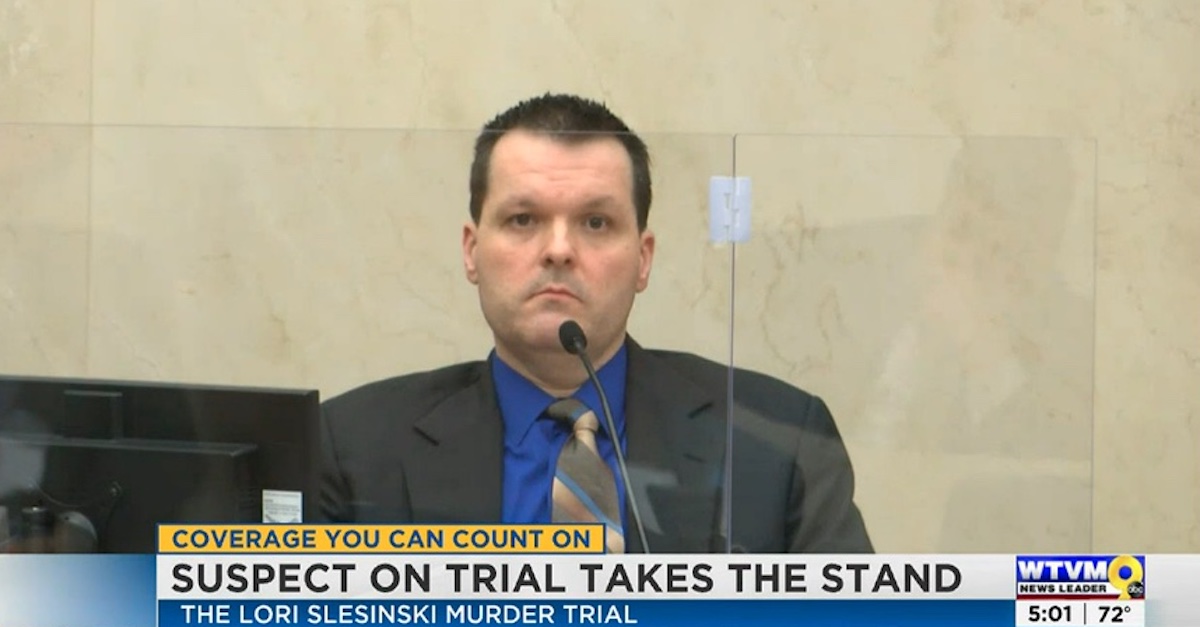 An Alabama man has been convicted of murdering a woman who went missing more than 15 years ago—and whose body has never been found.

Derrill Richard Ennis, 41, was convicted of capital murder Thursday in the death of Lori Ann Slesinski, 24, who has not been seen since 2006.

A Lee County jury convicted Ennis after 10 days of trial, including one previous full day of deliberations.

“I did not dump Lori’s body anywhere,” Ennis replied.

“Who did then?” Ventiere asked.

“I have no idea,” Ennis responded.

Ennis also had explanations for the fresh scratches he had on his arms and hands when police questioned him in the days after: he said that they came from his dog.

Ennis’s defense lawyer also suggested that a cigarette with Ennis’s DNA found at the scene of Slesinksi’s burned-out car had been planted.

Slesinksi was last seen by friends and family on June 10, 2013, according to a timeline of the case from local ABC affiliate WTVM. Her mother, Arlene Slesinski, reported her missing on June 13.

During an investigation into Slesinski’s disappearance, a police officer allegedly discovered that the door to Slesinski’s mobile home appeared “splintered.” He also reportedly noticed scuff marks on the walls, disheveled bedding, missing phone cords and kitchen rugs, and that the set temperature inside the home was “freezing.”

The detective also reportedly found a gold earring with hair in it and a trash can lid inside the trailer’s office and storage area.

Ennis appeared to have been considered a possible suspect almost immediately. The day after Slesinksi was reported missing, police searched Ennis’ car, which Slesinksi had apparently sold to him the day before she went missing. According to reports, investigators found tiki torches, Clorox cleaning spray, air fresheners, a cloth, and a cleaning brush, among other items.

Days later, investigators matched a sample of DNA that Ennis provided police to DNA from blood and semen found at Slesinksi’s home.

In the interim, on June 17, Slesinksi’s car was found burned down to the frame. Her body was never found, and at trial he insisted that he had nothing to do with her disappearance.

After being questioned by police, Ennis left Auburn. He wasn’t arrested until over a decade later, after renewed interest in the case from local and state law enforcement officials. In August 2018, then-District Attorney for Lee County Brandon Hughes announced that Ennis had been indicted for murder, he said that finding Ennis was “not an easy task,” and that it took law enforcement months to find him because “he didn’t want to be found.”

At trial, prosecutors argued that Ennis was obsessed with Slesinski. They said he killed her when she rejected his romantic advances. According to AL.com, Ennis testified that they did have a consensual romantic relationship, and that Slesinski disappeared after going to meet a drug dealer.

Ventiere, who took over as DA in 2021 over after Hughes was convicted of ethics violations, said that the fact that Slesinksi’s body has never been found is not a reason to acquit Ennis.

“I think we can all agree there should be no reward for someone who’s good at dumping a body,” Ventiere said during closing arguments, according to a report in the Opelika-Auburn News. “You should not get a prize for body disposal. You should be held accountable for their murder even though you were really good at dumping it.”

Although prosecutors had initially wanted to push for the death penalty, Ventiere told Judge Jacob Walker after he announced the verdict that that Arlene, Lori Ann’s mother, didn’t want to pursue it.