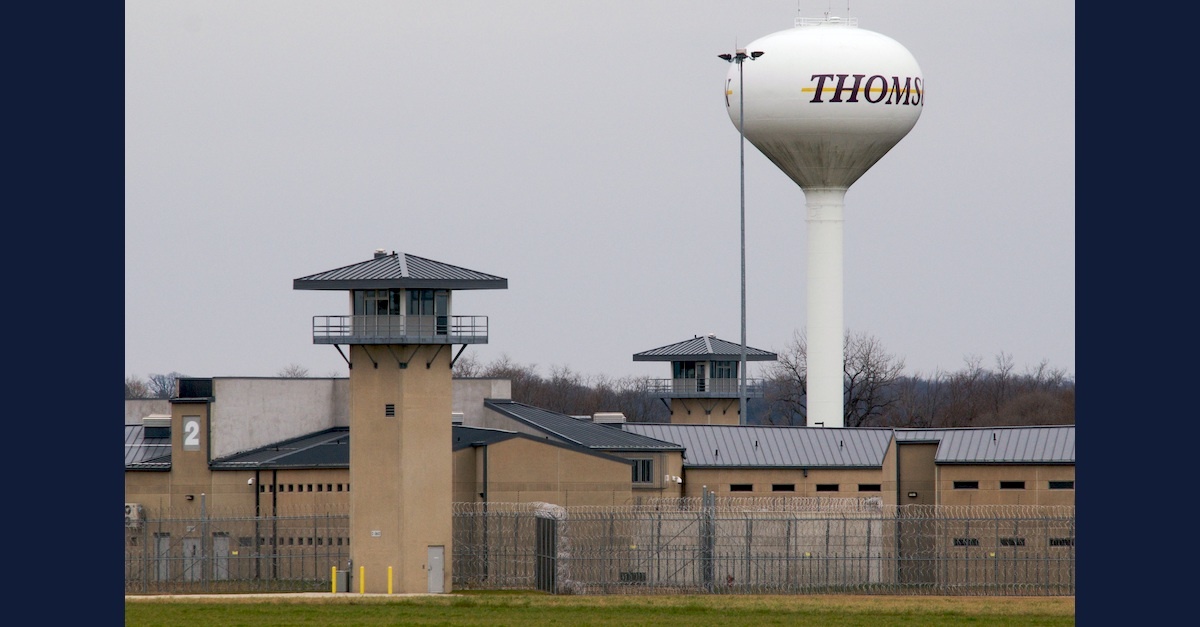 Two white supremacists, both of whom are federal inmates in Illinois, were indicted on Tuesday for the murder of a man who they allegedly killed because they believed he was Jewish.

Brandon C. “Whitey” Simonson, 37 and Kristopher S. “No Luck” Martin, 39, were charged in a federal indictment filed with the U.S. District for the Northern District of Illinois on charges of conspiracy to commit murder, murder in the second degree, a hate crime based on race and religion, and assault resulting in serious bodily injury.

They each face life in prison if convicted of the charges.

According to the indictment, Simonson and Martin killed Matthew Philips, 31, inside the U.S. Penitentiary Thomson on March 2, 2020.

Details regarding the circumstances leading up to the brutal slaying are currently scarce.

A press release from U.S. Attorney John R. Lausch, Jr. alleges that the pair beat Phillips to death on the day in question.

The indictment alleges the defendants were members of a white supremacist group called the Valhalla Bound Skinheads and “believed” the inmate “was Jewish.”

But it wasn’t just a belief.

The indictment also details how the killing unfolded:

On March 2, 2020, defendant Martin told another inmate, Individual A, that defendants Simonson and Martin were going to “get” Matthew Phillips and that Individual A should not interfere.

On March 2, 2020, defendant Simonson removed his coat prior to attacking Matthew Phillips.

In April, a special grand jury was called and heard evidence of the alleged murder as well as the defendants’ membership in the the VBS organization.

“The defendants espoused white supremacist views and possessed various Nazi memorabilia and other items symbolizing white supremacy including, but not limited to, letters, articles, and literature supporting and promoting VBS and white supremacy, a cup with a swastika engraved on it, drawings of Adolph Hitler, and prison shoes with the numerical symbols ’88’ and ’14,'” the filing alleges. “The defendants had tattoos showing their allegiance to VBS.”

As Law&Crime has previously reported, the numbers 88 and 14 have particular salience among white supremacists.

The so-called “14 words” refer to a phrase attributed to white supremacist David Lane, who came up with the eliminationist saying while serving a 190-year federal prison sentence for his role in multiple armed robberies and the murder of Jewish talk show host Alan Berg. Those words are often used in tandem with the number 88 because “H” is the eighth letter of the alphabet. Therefore, applying basic alpha-numerical code, 88 becomes “HH” which stands for “Heil Hitler.” According to dictionary.com, “1488, along with other variations, is a secret code used by neo-Nazis and other white supremacists to identify and signal their ideology.”

That fealty for those numbers among white supremacists, nationalist and neo-Nazis became something like common knowledge in political circles–and caused a flashpoint of controversy–during the Trump administration when the Department of Homeland Security under the 45th president sent out an anti-immigrant press release allegedly mimicking their usage. The DHS declined to comment on the record when asked about the similarities by Law&Crime.

The present administration is also keen to the symbolism–but has responded to them in much the opposite fashion.

In late October, surviving family members of the 2015 attack on Black churchgoers committed by a white supremacist reached an $88 million settlement with the U.S. Department of Justice for their alleged negligence in failing to follow federal background check procedures when the FBI failed to prohibit the sale of a gun by a licensed firearms dealer to the shooter, a self-proclaimed white supremacist, who wanted to start a “race war.”