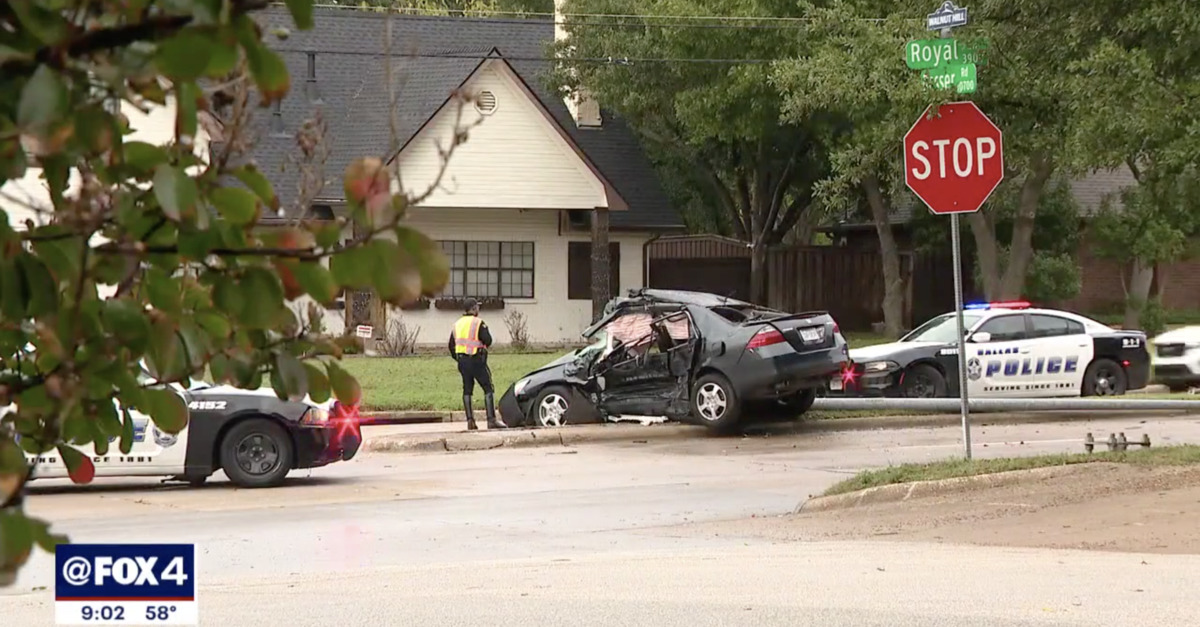 On Monday, Nov. 7, 2022, just after 11:00 a.m., a speeding Toyota Avalon struck 82-year-old Florence Kelly’s Honda Accord at the intersection of Royal Lane and Rosser Road. The victim was on the way to get groceries for herself and her husband.

Kelly was rushed to a nearby hospital but eventually succumbed to her injuries. Surveillance footage from a home in the area showed the driver of the Avalon and multiple passengers fleeing the scene. A group of bystanders attempted to stop the group from leaving the site of the crash but failed, Dallas-based Fox affiliate KDFW reported.

A 13-year-old girl pinned down in the Toyota Avalon’s front passenger seat was also left behind. She suffered serious injuries but survived.

In an interview with Dallas-based ABC affiliate WFAA, Kelly’s daughter said no one in the fleeing group called 911.

“I’ve never had a Thanksgiving, Christmas, a birthday, or a Mother’s Day without my mother,” Rebekka Kelly told the TV station. “I will miss her every day of my life, and she was my best friend.”

“It was surreal and heartbreaking,” the grieving daughter added. “It was something that we never imagined having to go through.”

The Dallas Police Department quickly released still images of the doorbell camera footage in an effort to locate the driver of the vehicle:

1/2
Dallas Police Detectives are asking for the public’s help in identifying the suspect involved in a hit-and-run crash on November 7, 2022, on Royal Lane.

Exactly one month after the fatal crash, those efforts yielded dividends, according to a DPD press release.

Details about the arrest and charges are currently scarce. The defendant’s name is not being released due to his extremely young age, multiple media outlets in the Metroplex reported.

Law&Crime reached out to the DPD for additional details on this case. A spokesperson said the investigation is ongoing and that no additional charges have been filed as of Thursday afternoon.

“He’s killed somebody,” the grieving son told the TV station. “He’s taken an innocent life, and there are consequences for your actions. I don’t really care how old you are. He consciously decided to get behind the wheel of the car and drive it with no driver’s license, obviously no real driving experience, and basically hurtled into our mother’s car, killing her.”

“I just cannot fathom some of the things that we’ve heard, that we’ve learned about him. It’s just unbelievable,” Donovan Kelly added.

Both siblings reflected on the incalculable loss.

“She was the bedrock for our family,” Rebekka Kelly told WFAA. “She was a powerhouse of a lady, active, beautiful, and vital. No one deserves that, and my mother didn’t deserve that. What happened to her was so cowardly.”

Both the son and daughter noted that their mother was their father’s lone caretaker after he recently suffered a stroke.

“It’s a gut punch, I knew he was young, that’s horrifying,” she told KDFW. “The whole thing is horrifying.”