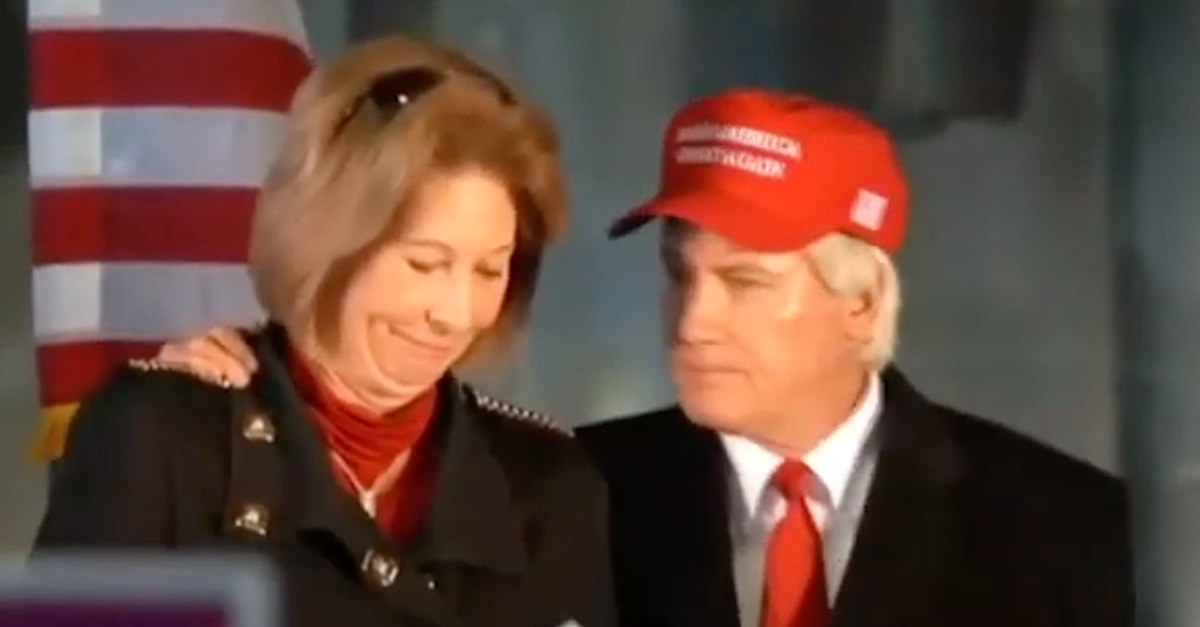 The self-styled “Kraken” attorneys behind a series of outlandish federal lawsuits seeking to overturn 2020 election results in four U.S. states urged a federal appeals court to overturn a sanctions order that earned every member of their legal team referrals for possible disbarment.

A little more than a year has passed since a federal judge issued blistering sanctions against nine attorneys led by attorney Sidney Powell, who told the Jan. 6th Committee that former President Donald Trump wanted to make her special counsel for voter fraud.

As found by U.S. District Judge Linda Parker in August 2021, the case that Powell and her co-counsel filed in a federal court in Michigan “was never about fraud.”

“This lawsuit represents a historic and profound abuse of the judicial process,” Parker wrote in a massive 110-page opinion and order. “It is one thing to take on the charge of vindicating rights associated with an allegedly fraudulent election. It is another to take on the charge of deceiving a federal court and the American people into believing that rights were infringed, without regard to whether any laws or rights were in fact violated. This is what happened here.”

On Thursday afternoon, Powell expressed no regrets for how she undertook the litigation.

“We were a small group of extremely dedicated and hard-working lawyers who filed a complaint,” Powell told the three-judge panel.

“I don’t know what more we could have possibly done to comply with Rule 11,” Powell said, referring to the rule forbidding lawyers from filing cases for “improper” purposes. One of the judges noted that another affidavit filed by Russell James Ramsland Jr. was facially “ridiculous.”

She did, however, own up to what she described as “mistakes,” including not knowing enough about the person behind an affidavit that she code-named “Spyder.” Her legal team identified him as a “military intelligence expert.” The Washington Post unmasked him as Joshua Merritt, who was an Army mechanic who was not in intelligence.

In the past, Powell and Wood — who funded their post-election litigation through their entities Defend the Republic and FightBack Foundation, respectively — tried to discredit Judge Parker by noting that she was appointed by former President Barack Obama. Federal judges across the political aisle rejected all four of their lawsuits, including one appointed by Trump.

“What About the Tweets?”

The panel appeared to give Wood’s lawyer Paul J. Stablein a tough reception, too.

As he had in the lower court, Wood downplayed his connection to the Michigan “Kraken” litigation, denying that he was part of the legal team despite his name appearing on pleadings. Stablein claimed that Parker made a “factual mistake” by rejecting this and finding that Wood was actively involved in the litigation.

“What about the tweets?” Judge Boggs asked.

At the time, Wood was a prolific Twitter user who gained hundreds of thousands of followers peddling conspiracy theories about the 2020 election. His account was suspended after claiming the Jan. 6th attack on the U.S. Capitol was “staged” — and calling for then-Vice President Mike Pence to be arrested for treason and “face execution by firing squad.”

Before being booted from the platform, Wood hardly appeared to hide his association with the lawsuit from his followers.

“More than taking responsibility, he seems to be boasting about it perhaps,” Boggs noted.

In one of those tweets, Wood denied receiving notice of a Rule 11 motion, but his tweet showed he read about it on Law&Crime, linking to a story from Dec. 15, 2020. Wood claimed to his Twitter followers that Detroit’s lawyer David Fink and the Democratic Party’s attorney Marc Elias “falsely accused” him. He also called Law&Crime a “propaganda rag.”

In oral arguments, Fink seized upon those insults in his tweets to note Wood hadn’t told the court the truth: Wood did know about the Rule 11 notice during the safe harbor period.

“Serving a Purpose That Was Extrajudicial”

On Jan. 5, 2021, Fink filed his sanction motion warning of the dangers of the lawyers’ stolen election rhetoric, which he deemed a threat to the transfer of power. Fink said he takes no pride in having seen what happened the next day. The impassioned Detroit lawyer denounced their “abuse of the judicial system,” emphasizing that they must have known that their lawsuit could not have possibly achieved their goal.

Several post-election lawsuits by Trump and his allies were dismissed under the doctrine of laches, meaning that the lawyers sat on their rights and waited too late to file.

That argument was key because Judge Kethledge raised a hypothetical about whether an effort to overturn an election would have been frivolous, on the law, if it were supported by the facts. Fink’s answer was that, even then, the pro-Trump lawyers must have known that their lawsuit was filed too late, and they lacked standing to file it.

Instead, Fink said, the lawyers wanted to send the “message the election was stolen — and it was not.”

“They lacked the law to support it, and as such, it was serving a purpose that was extrajudicial,” Fink said.

“They have First Amendment rights, but not to tell lies in court,” he added. “I think it’s that simple.”

The “Kraken,” as Powell branded her lawsuits, refers to the octopus-like monster of myth that was given the Hollywood treatment in Clash of the Titans. The movie produced the catchphrase: “Release the Kraken,” after which the fearsome creature was ultimately slain.

All four lawsuits by Powell and her co-counsel — filed in Michigan, Wisconsin, Georgia, and Arizona — met with a similar fate.