‘Please Don’t Let Her Die; I Can’t Be Alone’: Police Release Heartbreaking 911 Call of Ohio Girl Who Reported that Her Dad Shot Mom and Himself 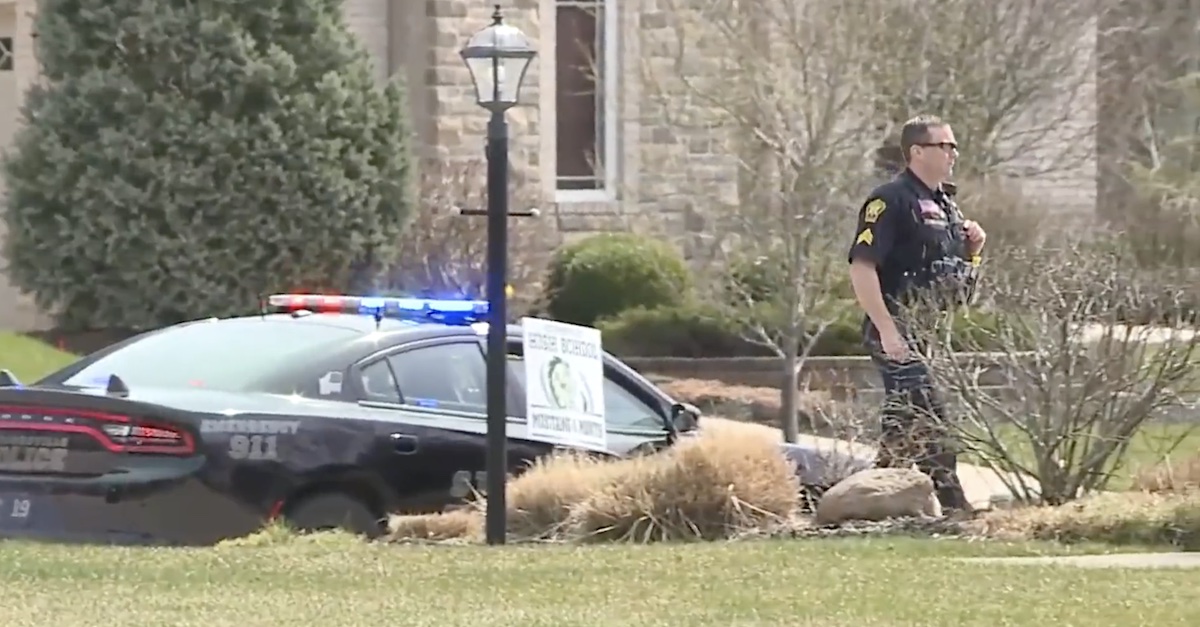 Pictured: A police officer outside the crime scene in the aftermath of the shooting.

Police in Strongsville, Ohio, have released a heartbreaking 911 call made by a young girl reporting that her father had shot her mother and himself in a murder-suicide over the weekend.

Law&Crime is not sharing the audio itself because it could identify the minor, but we will quote the back-and-forth between the clearly distraught caller and the dispatcher.

As Law&Crime reported Monday, Strongsville Police said in a press release that a 911 call came in just before 11:30 a.m. on Saturday reporting the deadly shooting. Authorities said they found Carrie Mae Schlieper Keefe, 42, and Kevin Keefe, 49, shot at the scene.

Following the 911 call, police said, Kevin Keefe was found dead at the scene and identified as the suspected shooter. Carrie Keefe was found unresponsive and dying. Tragically, the mother of three daughters—all of them enrolled in the local school district—died at a nearby hospital.

The 911 call released by Strongsville Police provides more insight into how authorities identified the shooter.

“My dad just killed himself and he shot my mom,” the girl said.

“It’s very hard to hear you can you take me off speaker phone?” the dispatcher said.

“Okay, what’s going on [at] Calderdale [Lane],” the dispatcher asked.

“My dad just shot my mom and he killed himself,” the girl said.

“Your — did what?” the dispatcher answered.

The dispatcher then asked the child caller where in the house her parents were located.

“My mom’s laying on the kitchen floor,” the girl said. “He’s laying by the stairs, just like right past the kitchen.”

The dispatcher then asked about whether the Keefe parents were still alive.

The girl said her mom was shot in the arm, right shoulder, and her waist.

“Where’s the gun at, do you know?” the dispatcher asked.

“It’s by my dad but I don’t want to go over there,” the girl responded.

“Is he awake?” the dispatcher asked.

“He is dead? Aww,” the dispatcher said.

“Please hurry up, she’s almost gone. I can’t lose her,” the caller said of her mom.

“Barely, she’s making weird sounds,” the girl said, noting that her uncle was at the house and trying to help save her mom.

“Do you know where they are?” the caller asked, referring to first responders. “I think she is going to die soon.”

“Please don’t let her die; I can’t be alone,” the girl said.

The call, which lasted for more than six minutes, ended with the sounds of children crying as first responders arrived at the Calderdale Lane home.

While WJW reported that Carrie Keefe filed for divorce in October 2021, WOIO said that the estranged couple had recently agreed to sell the home where the murder-suicide took place.

“Our community suffered a tragic loss yesterday with the deaths of Carrie and Kevin Keefe, in what Strongsville Police are investigating as a murder-suicide. When lives are lost in such a devastating way, the effects can be far-reaching,” said part of an email which Strongsville City Schools Superintendent Dr. Cameron M. Ryba sent to parents and staff. “As a school district and community, we need to support one another. Please keep the family and the Keefe children in your thoughts and please reach out to your school counselor if we can be of any help to you or your children as we process these events as a community.”

An obituary said that Carrie Keefe was a “loving and devoted mom,” a sister, a daughter, and a “beloved aunt of 12.”

“Carrie was a pharmacist in the ICU/OR at University Hospitals for over 20 years,” the obituary said. “She was a caring soul who loved spending time with her daughters, and always made them smile.”

[Image via Image via WJW screengrab]