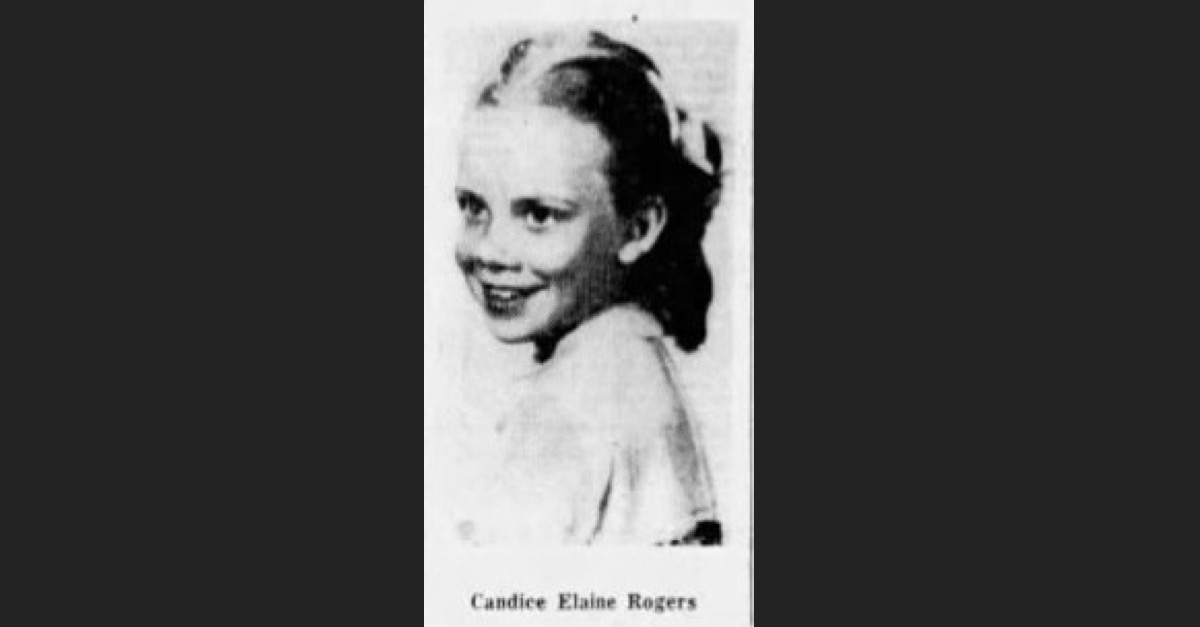 Police in Spokane have solved the cold case of a 9-year-old girl who was raped and murdered more than 62 years ago.

Candice “Candy” Rogers was going house to house selling Camp Fire mints on March 6, 1959 when she went missing. She was found just over two weeks later, buried under a pile of pine needles and brush.

She had been strangled to death with a piece of her own clothing, police said. She had also been raped.

The crime had been Spokane’s oldest cold case—until now.

According to police, John Reigh Hoff is the one who committed the horrific crime. While police were not able to reconstruct the specific events leading to Candy’s death, they are certain they found the perpetrator.

Hoff died by suicide in 1970, at age 30. He was 20 years old at the time of Candy’s murder. He had not previously been considered a suspect.

The crime rocked the small community where Candy lived. Hundreds of volunteers joined law enforcement in the search, and local religious leaders took to local media to beg for her safe return.

“The Spokesman-Review then reported that every available police officer, detective and sheriff’s deputy were assigned to the case during the height of the 24/7 search, while former Bishop of Spokane Bernard Topel and Episcopal Bishop Russell Hubbard pleaded through media outlets for people to bring forward information on Rogers to a priest or minister under confidential privilege,” a Spokesman-Review story said.

The search itself ended up compounding the community’s tragedy: three people who were inside a helicopter searching a section of the Spokane river died when the aircraft hit a power line and crashed.

Although Spokane detectives had been trying for years to crack the case, Det. Zac Storment said things took a turn in 2021, when he submitted a DNA sample from Candy’s clothing to a Othram, a genealogy company that helps law enforcement with DNA investigations.

Hoff was also the only one out of the brothers who had children. One of his daughters, Cathie, provided a DNA sample, which was ultimately deemed to be a match for DNA found on Candy’s clothing.

According to police, Storment was the one to deliver the news about the case to Candy’s surviving family members.

“I feel like Candy’s loss was just a horrible loss,” a woman identified only as Candy’s cousin said. “She was so cute,” the cousin said, wiping away tears, “and she didn’t have much time.”

“Anger, sadness,” Hoff’s daughter Cathie said, according to a police video aired at the press conference identifying her only by her first name. “He was evil … he got to die with people thinking he was an upstanding man, and he wasn’t.”

Cathie was 9 years old—the same age as Candy—when Hoff took his own life.

Storment said there were a number of eerie coincidences linking Candy to her murderer. Both were buried in the same cemetery, and Hoff’s stepsister was Candy’s “big sister” in her Camp Fire group.

Hoff’s surviving family has since moved Hoff’s remains from that cemetery, in hopes that Candy “can enjoy some peace,” Storment said.

At Friday’s press conference, a reporter asked Storment if he believed Candy was killed the night she was taken.

“I’m not going to talk about that today,” Storment said, citing concerns about the possibility that families were watching the press conference. “I don’t know that I can get through it, to be honest.”

Lt. Troy Teigen said that it was a “special day” for the city of Spokane, and issued a warning to future would-be criminals.

“Nothing like this should ever happen to a child anytime, anywhere, and yet it did,” Teigen said at the press conference Friday, before issuing a warning: “I’d like to speak directly to those individuals that perpetrate these types of heinous crimes. I want you to know that we will find you, that we are tenacious that we’ll never give up. In life or death, you will be found.”