Sheriff’s Deputy Shot His Wife, Killed His Son, the Family Dog and Himself Two Months After Attempted Bank Transfer of $40K Was Flagged and Halted 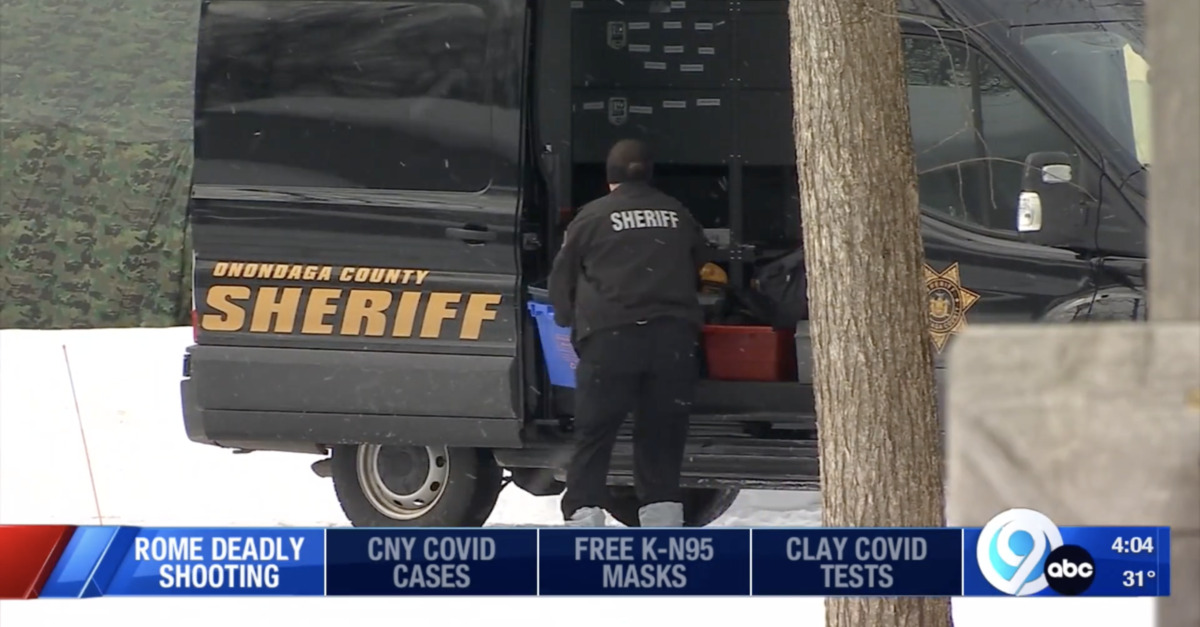 Authorities say they have “every reason to believe” an upstate New York sheriff’s deputy attempted to massacre his family one week ago–ultimately killing his son, himself, the family dog, and severely injuring his wife. Now, adding another layer to the tragic story, it’s been reported that just two months prior to the shooting someone tried to transfer $40,000 into the deputy’s bank account.

That attempted bank transfer was flagged and halted, according to records obtained by Syracuse.com.

The money was scheduled to be moved from an Onondaga County Sheriff’s Office account into the personal account of then-deputy Isaac Eames, 48, who would later turn his gun on his family and then himself, the outlet reported, citing “a source who requested anonymity because the county’s investigation is continuing.”

Anti-fraud employees at the bank in question reportedly notified Onondaga County county officials about the suspicious transfer, which was pending, and the transaction was never fully processed.

The off-duty deputy’s wife, 46-year-old Karen Eames, and his son, 21-year-old Troy Eames were also there, suffering from their own gunshot wounds. The victims were rushed to the Upstate University Hospital.

The deputy’s body was found just past the foyer of the residence, according to the sheriff’s office where he worked. His son’s body was found on the landing of their staircase; he had been shot at close range in the head. Karen Eames was found in a bedroom near the entrance. She was shot twice: once in the face, and once in the arm.

“There’s indication that he shot his son and his wife and the dog and then turned the gun on himself,” Onondaga County Sheriff Gene Conway said in an interview with Syracuse.com. “There’s no signs of struggle…no indication of any drawn-out argument.”

“We have every reason to believe that [Isaac Eames] was responsible, that he was the one that fired the weapon, both at his family members and then turned the gun on himself,” Conway added in comments to Albany, N.Y. ABC affiliate WTEN.

Troy Eames was remembered in his obituary:

Inside this big strong young man existed a kind, loving and sensitive soul. He always wanted to please people and cared for everyone he loved. He will be sadly missed but will always be remembered as “Momma’s Boy”.

The victim is survived by his older brother, Andrew Eames, who was not present when the shooting occurred.

Karen Eames, who was also somehow able to dial 911, is currently recuperating and said to be in fair condition as of last Thursday. She was originally admitted as critical and then moved to serious condition. She recently spoke with police about the incident, according to Syracuse.com.

A GoFundMe for the family was set up by a relative to help with funeral expenses and to help support the surviving members of the Eames family:

It will be an extremely long road ahead physically and emotionally.

The family has established this fund to assist Karen and her surviving son, Andrew.

Anyone who knows Karen knows what a loving, caring, thoughtful, funny and generous person that she is. She is adored by her family, friends co-workers and students.

Any prayers, positive thoughts and donations are greatly appreciated. We are so thankful for all of the love, prayers and community support that our family has received during this extremely difficult time.