‘She Spanks Them with a Belt’: Police Say 2-Year-Old Victim’s Brother Told Them Grandma Played Role in Fatal Abuse 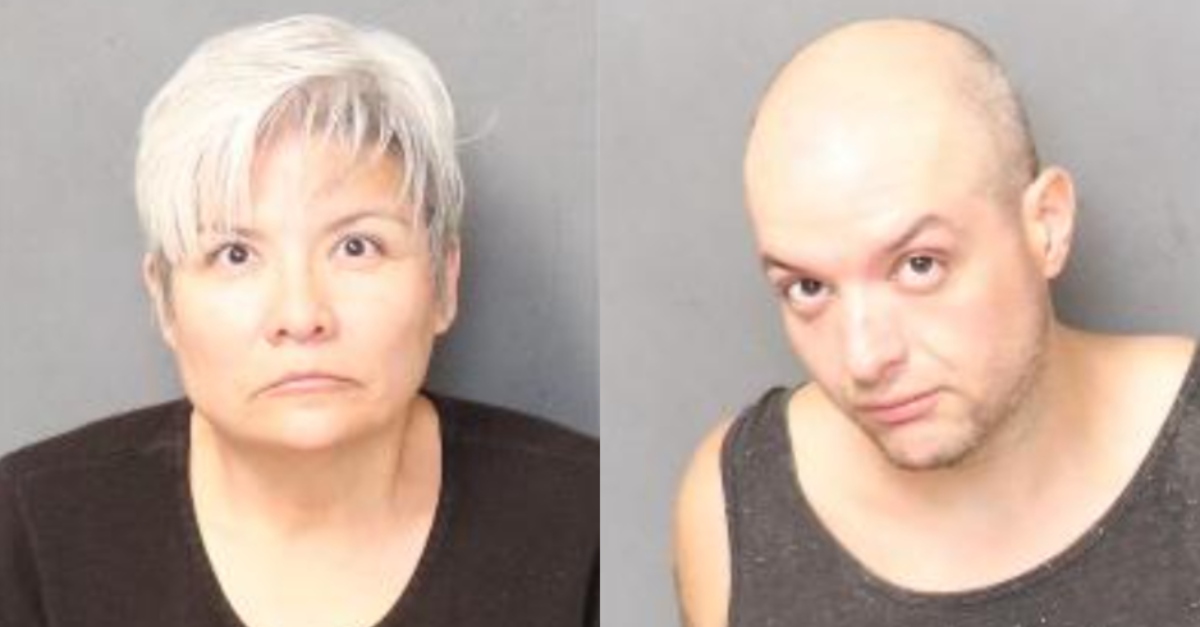 More than a week after authorities charged her son with fatally abusing his 2-year-old daughter, the late toddler’s grandmother also has been charged with child abuse. Court records show that the victim’s 5-year-old brother told authorities that their grandmother participated in the alleged abuse and spanked the children with a belt.

Diana Marie Cantu, a 53-year-old also known as Diana Marie Garcia, was booked into jail Friday, according to records from Albuquerque, New Mexico.

Her son Michael David Garcia, 32, was arrested back on Oct. 2, accused of fatally abusing his daughter Diana McGrory. The child was found with with bruising all over her body, as well as some burns, police said. One of the surviving children said their grandmother would spank and punish them when they got in trouble, police said.

Both mother and son face a count of child abuse resulting in great bodily harm or death.

“The 2-year-old girl, Diana McGrory, and her siblings had been staying with their father and grandmother,” Albuquerque police wrote. “Following the arrest of Michael Garcia, detectives continued to investigate the case, and determined the totality of the circumstances warranted charges against the grandmother, Diana Garcia.”

“Visible Bruising to the Majority of Her Body”

Cops said they were dispatched to a home on San Pedro Drive after fire and rescue were trying to save a 2-year-old girl’s life. She did not have a pulse, and she was not breathing, they said. Officers identified the child in the documents by her initials D.M.

“[McGrory] had visible bruising to the majority of her body, to include but not limited to her face, eyes, ears, forehead, arms, legs, torso (front and back) and feet,” they said. “[McGrory] also had a dark red burn on her right thigh, one on her backside, and one each palm.”

Michael Garcia allegedly insisted she got the injuries from her hitting her head against the mobile home wall, and the burn from a stove, or pot of water. The medical examiner’s office also noted that McGrory seemed emaciated, and there was potential for “subdural hemorrhaging” (bleeding inside the skull), officers said.

Cantu allegedly told police about one incident in which she heard a “boom.”

“Diana advised there was an incident where [McGrory] was acting up, had defecated in her clothing, and had feces on her hands,” police wrote. She said she and her son were on the phone while he had to wash McGrory in the bathtub.

“While speaking, Diana [Cantu] heard a ‘boom,'” police wrote. “When she asked what it was Michael replied that [McGrory] had thrown herself down. Diana did not hear [McGrory] cry.”

Cantu allegedly said she believed that the child got the large burn on her thigh on Sept. 27. Garcia told her he had taken a hot pan off the stove. McGrory followed him into the kitchen, he did not see her, and she got burned, according to this version of events. Cantu allegedly said they did not seek medical attention but asked her son to schedule an appointment.

“Diana advised Michael was not an angry or violent person,” police wrote. “However, he did seem frustrated at not knowing how to handle his children’s autism. When it came to discipline, Diana stated neither she nor Michael liked to spank the children.”

But a neighbor told police that he has heard loud yelling from the home multiple times, with the most recent happening about the month before. He believed that Garcia had anger problems, based on the multiple arguments and yelling incidents.

McGrory’s 5-year-old brother, identified in documents as Q.M., said that their father and grandmother punished and hurt her when she was “bad.” They spanked her with a belt and their hands on her hands and butt, he said.

He said his brothers, T.M. and B.M., both age 4, were also punished when they did not listen.

“TM does not speak,” police wrote, summarizing statements by Q.M. “When TM doesn’t listen he is punished. TM is punished by being spanked on the hands and butt. TM has a lot of bruising from getting hurt. TM picks at his skin too. QM doesn’t know how TM gets the bruises. Neither dad nor grandma say anything about the bruises.”

A doctor discovered that T.M. had “significant abdominal bruising and bruising on his back,” officers wrote. “TM also had a broken clavicle and foot. This presentation is indicative of physical abuse.”

Q.M. also described grandma as an active participant in the spanking, and that she spanked his sister and brothers.

“His grandma spanks them on the hands and butt,” police wrote, summarizing the interview with the 5-year-old. “She spanks them with a belt. Grandma gets mad when his sibling don'[t] listen. She spanks and punishes them. QM does not get into trouble.”

The three surviving children are in custody with the New Mexico Children, Youth and Families Department, according to The Albuquerque Journal. Garcia’s attorney Megan Mitsunaga reportedly said her client maintains his innocence and will defend against these claims. Court records for Cantu are not immediately available.

Both mother and son remain held without bond.