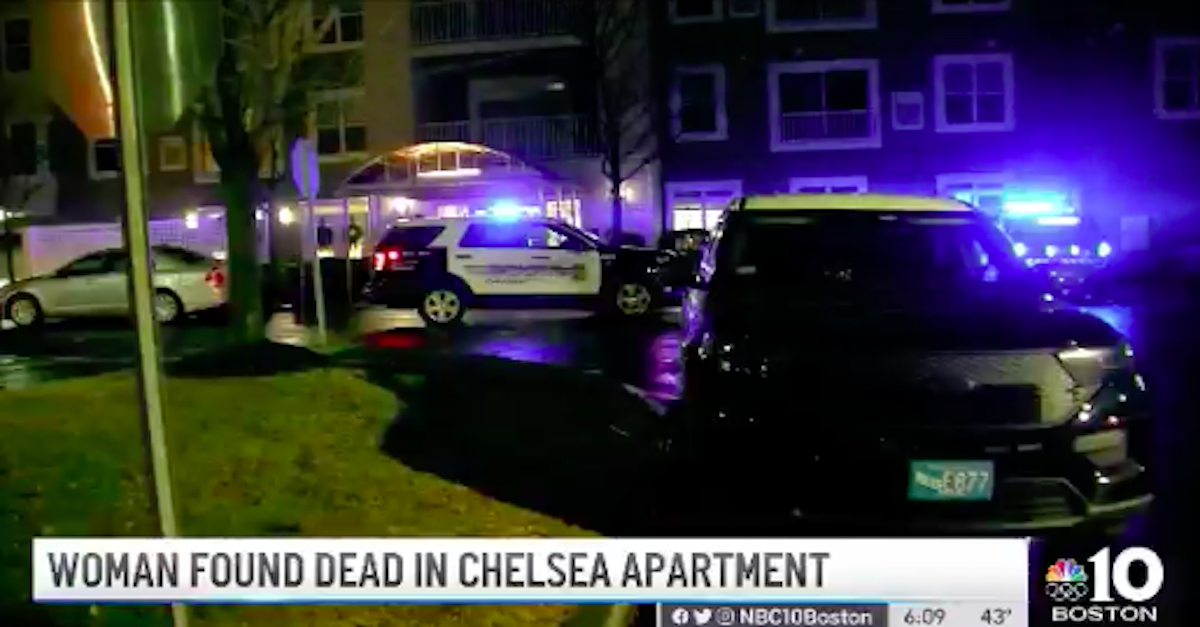 Investigators outside the apartment complex where Paula Andrea Ortiz Ramirez was allegedly stabbed to death by her estranged partner Mario Alberto Mira Lopera.

A Massachusetts man is currently hospitalized in critical condition after authorities say he murdered his estranged partner over the weekend. The Suffolk County District Attorney’s Office on Monday said that if Mario Alberto Mira Lopera, 48, survives his life-threatening injuries, he will face murder charges for allegedly killing 48-year-old Paula Andrea Ortiz Ramirez in her own home on Saturday evening.

Officers with the Chelsea Police Department said they responded to a call on Saturday at an apartment complex on Stockton Street about a possible domestic violence incident. Upon arriving at the scene at approximately 4:21 p.m., first-responders discovered Ramirez’s lifeless body. She was pronounced dead at the scene after apparently suffering “multiple stab and slash wounds.”

It is unclear whether Lopera’s injuries were the result of a struggle between him and Ramirez or if they were self-inflicted wounds. The Suffolk County DA’s office did not immediately respond to an email from Law&Crime seeking clarification and additional details on the case.

“If Mr. Mira survives his wounds, he will be charged with murder and assault and battery with a dangerous weapon,” the district attorney’s office said in a statement.

Prosecutors also noted that the situation is particularly tragic because Ramirez and Lopera have multiple children together, all of whom have been “forced to endure tragedy and profound grief during the holiday season.”

“The evidence indicates that Ms. Ortiz’s life was taken in a violent domestic attack. This is a tragedy as children are now left without a mother and have a father who will be charged with her murder if he survives,” District Attorney Rachael Rollins (D) said in a statement. “My heart goes out to these children and this family that is forced to endure tragedy and profound grief during the holiday season. My office will be available and at their sides to provide the support and resources they may need during this long process.”

Authorities said that additional information in the case will be provided after Lopera makes an appearance in Chelsea District Court.

The DA’s office emphasized that there is a statewide hotline dedicated to helping the victims of domestic violence called SafeLink, which can be reached by calling 877-785-2020 or 877-521-2601. The 24/7 hotline has employees who speak English, Spanish, and Portuguese.