‘Pro-Russian Propagandist’ and Ukrainian ‘Oligarch’ Who Palled Around With Rudy Giuliani Is Indicted by U.S. Prosecutors 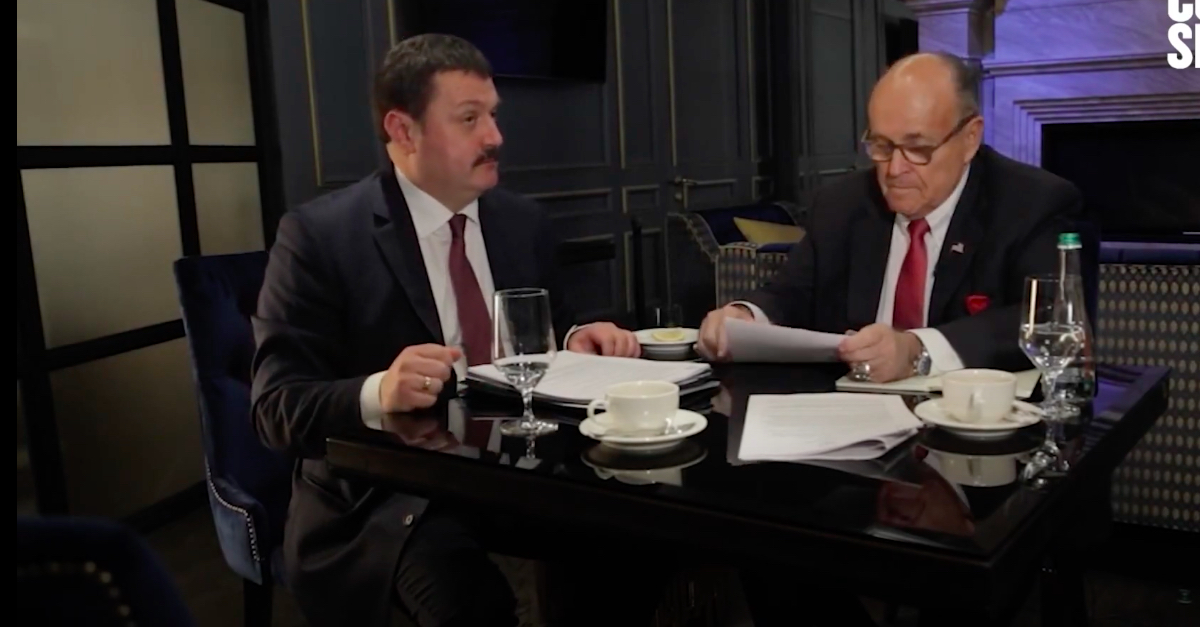 A onetime associate of Rudy Giuliani affiliated with Russian intelligence was indicted in a Brooklyn federal court on Wednesday.

According to the U.S. Attorney’s Office for the Eastern District of New York, Andrii Derkach, 55, whose first name is also sometimes transliterated as “Andriy,” a Ukrainian national, is currently still at large.

Described as an “oligarch” by prosecutors, the longtime Ukrainian politician has previously been sanctioned by both the United States and his home country due to alleged pro-Russian activities that earned him federal sanctions.

According to U.S. authorities, Derkach is a “Russian agent” who played a leading role in Russian Federation efforts to interfere with the country’s 2020 general election, which led to his designation by the Treasury. According to Ukrainian authorities, the member of parliament is a “pro-Russian propagandist.”

In a seven-count indictment obtained by Law&Crime, federal prosecutors allege that Derkach and his wife, who is mostly referred to as an unnamed co-conspirator, Co-Conspirator-1, ducked those sanctions through a web of entities to buy and maintain two luxury condominiums in the posh Los Angeles County enclave of Beverly Hills – all the while concealing Derkach’s own interest in both of the properties from U.S. regulators and financial institutions.

An accompanying criminal complaint identifies Derkach’s wife as Oksana Terekhova, 49, who is also a Ukrainian national.

The basic contours of the alleged scheme include the use of a so-called “corporate nominee” who was wired $3.92 million from bank accounts in Latvia and Switzerland. Those accounts, prosecutors say, were registered to companies operating in the British Virgin Islands. The funds were then allegedly split up two ways: $3.2 million went to cash transactions that secured the two residences.

The owners of the two properties were corporate entities with no visible relationship to the Derkach family – and without the nominee’s knowledge of who his clients actually were, prosecutors allege.

In September 2020, Derkach was sanctioned by the U.S. Department of Treasury’s Office of Foreign Assets Control – by way of the List of Specially Designated Nationals and Blocked Persons List, which is commonly known as the “SDN List.”

According to OFAC, Derkach was “an active Russian agent for over a decade, maintaining close connections with the Russian Intelligence Services,” who “waged a covert influence campaign” to undermine the 2020 U.S. presidential election.

In January 2021, the business the couple ran together, Era-Media, was added to the SDN List.

“According to Ukrainian public databases and records, Derkach was the ‘founder’ and ‘beneficiary’ of Era-Media,” the complaint says. “On Derkach’s own website, derkach[dot]com[dot]ua, Derkach was identified as “Honorary President of the media holding company Era-Media.” In some public Ukrainian records, Terekhova was listed as a “beneficial owner” or “founder” of Era-Media.”

The document adds another wrinkle to those alleged efforts to deceive the people who managed their U.S.-based wealth.

“After OFAC added Era-Media to the SDN List,” the complaint alleges, “Terekhova was removed as a ‘beneficial owner’ and ‘founder’ from [Era-Media’s] records.”

Of course, there’s nothing illegal about the shadows of corporate obfuscation and tiered entity ownership of valuable assets. Such practices are common. And, for awhile at least, Derkach and his family – including his children and his parents – used the residences themselves, prosecutors say.

The court documents, however, also allege the purpose of the murky structure was to dodge sanctions. Prosecutors also say that Terekhova lied on at least one bank application, that Derkach and his wife deceived the corporate nominee together (causing him to falsely represent myriad pieces of information to myriad parties), and that Derkach falsely disclaimed being the same “Andriii Derkach” who has been subject to years’ worth of “negative press.”

In December 2019. during the height of the Robert Mueller-led investigation into then-president Donald Trump and his 2016 presidential campaign, Derkach met with Giuliani in Ukraine and loaded the former New York City mayor up with a litany of conspiracy theories – including a 50-page dossier intended to help Trump manufacture allegations of corruption against eventual President Joe Biden.

Derkach also sent a package of some sort to then-representative Devin Nunes, who claims he never opened it and turned it over the FBI. The manner and order of events related to that package’s surrender to authorities later became hotly disputed by Nunes and MSNBC host Rachel Maddow in an ongoing defamation lawsuit.

While once embraced by at least some in the GOP, the Ukrainian politicians has, as of late, become a persona non grata.

Federal prosecutors in Brooklyn, New York, say his deceptive accounts were used to transact business even after Derkach was formally sanctioned.

The indictment accuses him of one count each of violating U.S. sanctions, bank fraud conspiracy, money laundering conspiracy, and four counts of money laundering. A civil forfeiture proceeding is also under way in order to seize the condominiums and the money in the accounts.

“The conduct of this Kremlin asset, who was sanctioned for trying to poison our democracy, has shown he is ready, willing, and capable of exploiting our banking system in order to advance his illicit goals. The U.S. will not be a safe haven where criminals, oligarchs or sanctioned entities can hide their ill-gotten gains or influence our elections,” U.S. Attorney Breon Peace said in a press release. “This Office, together with our law enforcement partners, will use every tool available to prosecute those who evade sanctions and abuse the U.S. financial system, and we will identify, freeze and seize criminal proceeds whenever and wherever possible.”