‘He Has Removed His Pants to Show the Court His Backside’: Michigan Man Moons Judge During Bond Hearing 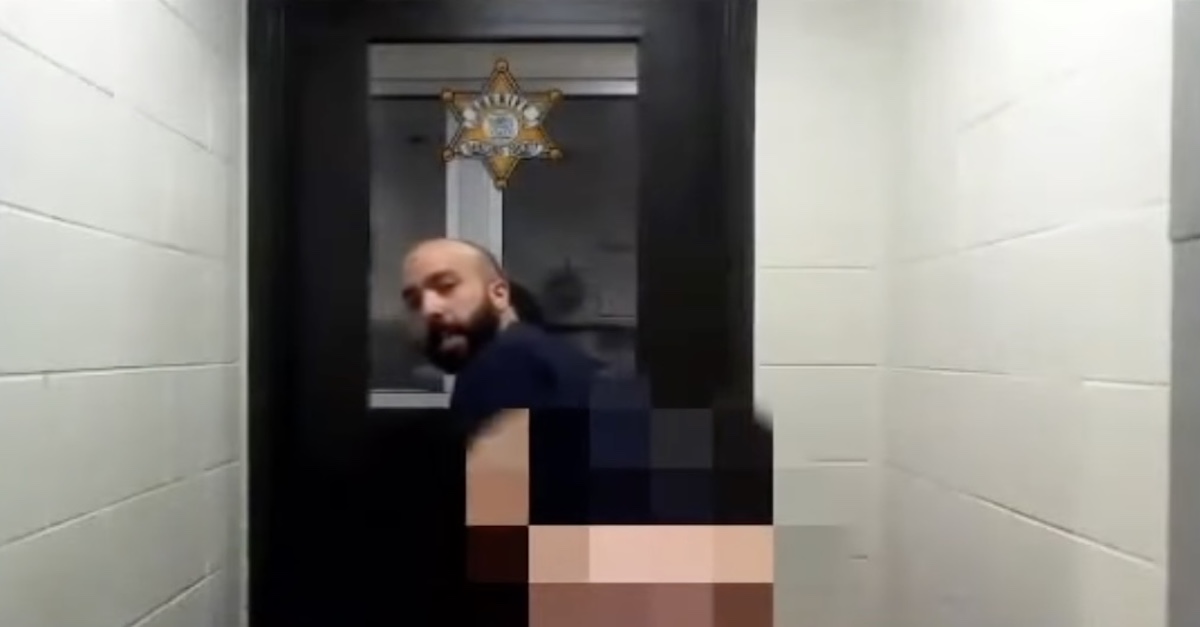 A Michigan man who allegedly made anti-semitic and racist threats to parents and children at a preschool and synagogue last week made a shocking reveal during a Tuesday hearing in Wayne County Circuit Court when he pulled his pants down and mooned the presiding judge in a separate case. Following the cheeky display, Judge Regina Thomas approved prosecutors’ request to have the $1 million bond for Hassan Chokr revoked.

Chokr was appearing from jail via Zoom in a case where he is accused of assaulting/resisting/obstructing a police officer in 2020 when the antics ensued, court records show.

During the hearing, video shows an assistant Wayne County prosecutor say that Chor had “posted videos and statements on Instagram where he talks about buying guns and in one of his Instagram posts the defendant says ‘Your Jew tactics will only backfire on you, you have no place on this earth, Jew [expletive] Jew mother [expletives]. A storm is coming to wipe you all out of our lives.’” In the meantime, Chokr — whose microphone was muted — appeared to be growing increasingly frustrated, pacing around the holding cell and repeatedly pointing and shouting at the screen.

“I want the record to reflect that while the court has muted the defendant’s microphone he appears to be yelling and pointing at the camera at the Oakland County Jail,” Judge Thomas said.

One of the attorneys begins speaking again when Chokr turns away from the camera and exposed his rear end while craning his neck and appearing to continue shouting at the camera.

“And now he has removed his pants to show the court his backside,” an incredulous Thomas said. “I don’t know why anyone would think that is appropriate for them to pull their pants down and show the court their behind.”

According to a report from the Detroit Free Press, Judge Thomas cited to Chokr’s absurd in-court behavior as well as the recent allegations from the synagogue in ordering his bond revoked. She also reportedly stated that Chokr “seems to be mentally ill.”

Chokr’s attorney, Duane Johnson, reportedly claimed that his client was “expressing his First Amendment rights and freedoms of speech” during the synagogue incident.

“If we’re doing things that are unsafe … we are infringing on other people’s rights,” Thomas reportedly said in response. “We don’t get to say and do whatever we want to say without the consequences of those actions. And so that’s where your client finds himself today. He exercised his rights, I’m exercising my right to give him a consequence for that. Nothing that any of us do in this life is without consequence.”

Watch a clip of the hearing from Detroit ABC affiliate WXYZ-TV below:

Chokr currently faces two counts of ethnic intimidation in the alleged incident at Temple Beth El. according to a press release from the Office of Prosecuting Attorney for Oakland County Karen D. McDonald.

“Anti-semitic and racist threats or ethnic intimidation of any kind, will not be tolerated in our community, and every such incident will be investigated and prosecuted to the fullest extent of the law,” McDonald said in a statement. “Our office created Oakland County’s first Hate Crimes Unit a little over a year ago to give us the resources needed to call out, investigate, and prosecute these serious crimes.”

His bond in that case was set at $1 million.