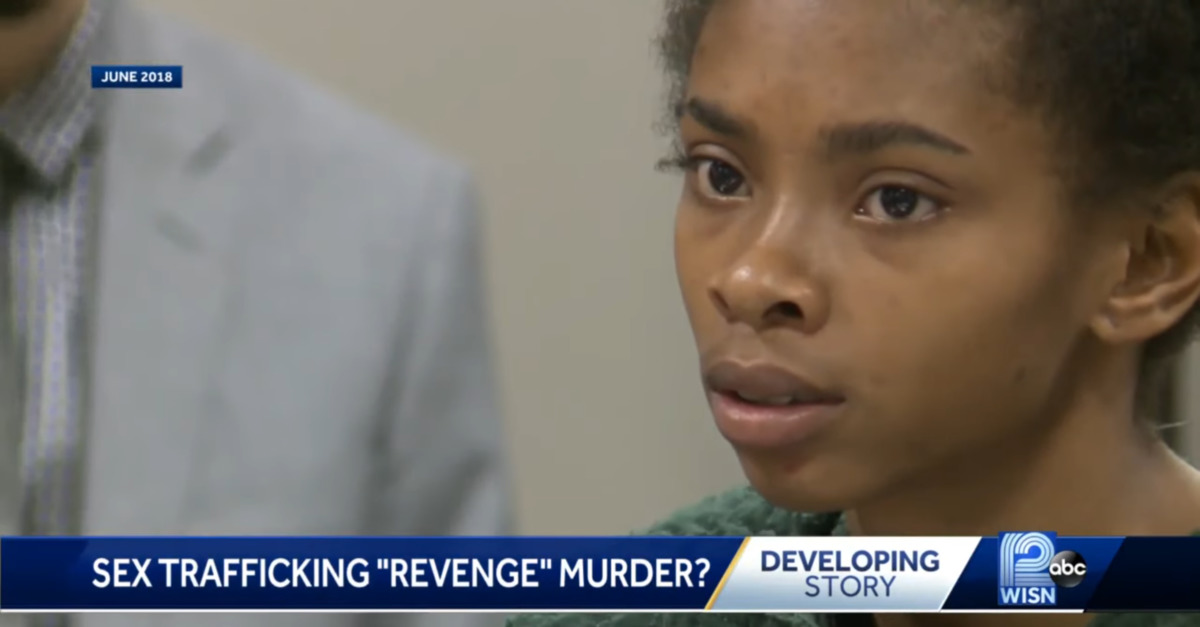 Chrystul Kizer was 16 years old when a 33-year-old man named Randy Volar began sexually abusing her on film. He also used her as an unwilling prostitute–selling her to other men and forcing her to have sex with them–multiple times per day. Kizer was 17 years old when she had finally had enough. She admittedly put two bullets in his head and burned his corpse in an effort to destroy the evidence. She’s since been charged with murder and the internet is outraged.

But it’s not just the uncontested facts that have activists and advocates up in arms. It’s that institutional forces seem to be arrayed against Kizer and her supporters across the country.

According to the Washington Post, police in Kenosha, Wisconsin were on to Volar and had been quite awhile. In fact, he had been arrested on several charges–including sexual assault of a child–in February 2018. Volar was actually out on bail on the night of his death.

Police and prosecutors in the Milwaukee suburb charged him with child enticement, using a computer to facilitate a child sex crime and second-degree sexual assault of a child–a slate of counts that would have meant more than 40 years in prison if Volar had been convicted of each crime–and which would have typically necessitated somewhere in the area of $100,000 bail for a wealthy individual. Volar had nearly $1 million in assets at the time of his death.

Instead, he was released on his own recognizance and told to wait for a court summons. But that summons never showed.

Volar spent $20,000 to hire a criminal defense attorney, but three months passed before police sent the case to the district attorney’s office. The file showed what was found in Volar’s house: “hundreds” of child pornography videos, featuring girls who appear to be as young as 12, and more than 20 “home videos” of Volar with underage black girls.

Still, Volar was not taken into custody. No sex crimes case was entered into the Wisconsin court system.

The Kenosha Police Department is tight-lipped about their decision-making process and not speaking to the press at all. Kenosha District Attorney Michael Graveley got a bit defensive when asked about his office’s conduct in the Volar case.

“In many and most of the cases, we didn’t know the age,” Graveley told the Post. “So we literally did not know whether we had misdemeanors or felony.”

While investigators took their time, Kizer took justice into her own hands. Twelve days after Graveley’s office received the mountainous evidence of child pornography, Volar was dead.

On June 4, Volar arranged for an Uber to pick Kizer up.

I had went into the house…He had ordered some pizza. We were smoking, and he asked me if I wanted to drink any liquor. And then he had gave me this drug. I don’t know what it’s called. And after that, we started to watch movies…And then, the drug, it made me feel weird or whatever.

Kizer claims that Volar then came onto her by touching her leg–but she wasn’t interested in sex that night. She sprang up, tripped and tried to get away, she says. But then Volar pinned her down. She doesn’t remember exactly what happened immediately afterwards–only the sound.

“Like a pop. A high pop,” she told the outlet from inside the Kenosha County Detention Center. “I started to panic.”

“Kizer said that she watches the show Criminal Minds, and she decided to make a fire,” a police description of her eventual confessional interview says. “Kizer said she poured red liquor everywhere…grabbed tissue or toilet paper and started the fire.”

After the publication of the Post‘s story, the internet sprang into action.

A GoFundMe was set up to pay for her legal defense and quickly raised in excess of $6,000–but disappeared.

Since yesterday the GoFundMe to support Chrystul & her family while they fight for her right to self-defense raised nearly $6K. Today GoFundMe cancelled the campaign without warning and is taking the funds. If you have experience dealing w/ this devastating situation, let us know pic.twitter.com/iPOUMwpyTy

Remember that feeling of institutional tyranny apparently bearing down on Kizer’s supporters?

Law&Crime reached out to GoFundMe for an explanation as to why that fundraising page was taken down but no response was forthcoming at the time of publication.

A petition has since been started insisting that Graveley drop the charges:

Asked why she continued to show up for Volar’s abuse, Kizer said: “Because he was a grown-up, and I wasn’t. So I listened.”