‘Oh, Well’: Prison Guard Allegedly Got Caught in Sting Operation Asking Someone to Murder a Man or Leave Him in a Coma 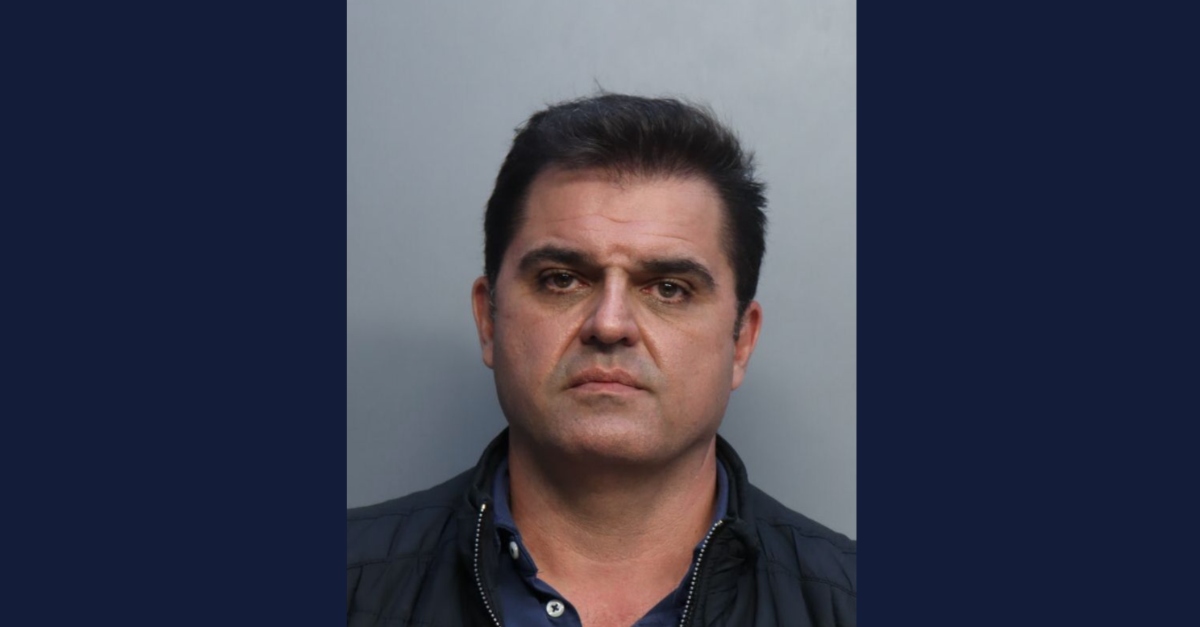 A prison guard in Florida is accused of trying to arrange a murder.

Authorities in Miami-Dade County, Florida, describe Jose Alcazar, 49, as a corrupt officer at the privately run South Bay Correctional Institution in nearby Palm Beach County, according to local reports.

He tried to set up the killing through an inmate’s “nephew,” who was actually an undercover cop, according to the arrest report obtained by The Miami Herald.

Alcazar allegedly brought up the plot during a meeting outside the Denny’s at 11701 W. Okeechobee Road on March 12. In the version of events from authorities, the undercover officer agreed, saying “he and his people would do their homework and let [Alcazar] know when they were ready.”

The topic returned to murder again on April 11, officials said. The “nephew” repeatedly asked Alcazar if he was sure he wanted the target dead. authorities said. Alcazar allegedly confirmed multiple times he was fine with it, though he left it up to the “nephew’s” discretion if killing was necessary.

“You observe him and analyze him,” Alcazar allegedly said. “If you think if it’s better for him to get wacked [sic] to leave all of us in peace.”

“If you tell me that you put one and he is left in a coma stage, then, oh, well,” Alcazar allegedly said later. “If you think that’s what it should be, it stays like that. I am doing this for my wife and my family.”

Authorities did not suggest a motive behind the murder solicitation.

“Remember on the first day we met,” Alcazar allegedly said after the undercover officer asked for confirmation on the murder. “I told you that if you step on me…”

“Yes, I remember that conversation,” said the officer, according to the law enforcement account. “I want to be good with that so there is no misunderstanding.”

Alcazar allegedly wound up on law enforcement radar after inmates told a Miami-Dade State Attorney’s Office investigator that Alcazar picked up drugs and contraband every weekend. Authorities said they set it up so that the undercover officer posed as a “nephew” of the inmate.

Amid three weeks of communication, Alcazar also allegedly asked the undercover officer for a .380 revolver to take into the “facility.”

During the April 11 meeting, he allegedly gave the undercover officer cocaine in an Ice Breakers gum container. In return, the officer gave him $1,900 in cash: $400 for the drugs, and the remainder as down payment on Alcazar’s $10,000 price to transfer the “uncle” out of South Bay, officials said.

Authorities said they arrested Alcazar when he and the undercover officer were heading back to their respective vehicles at the Denny’s parking lot.

Alcazar’s attorney of record did not immediately respond to a Law&Crime request for comment.

The defendant remains locked up at the Turner Guilford Knight Correctional Center on charges including first-degree solicitation of murder, introduction of a firearm or explosive device into prison, introduction of a communications device into prison, cocaine possession with a firearm, armed possession of marijuana with intent to sell, compensation for unlawful acts, and criminal solicitation.