‘Nobody Could Talk Him Out of Them’: Michigan QAnon Adherent Killed Wife and Family Dog in ‘Shocking’ Shotgun Attack, Daughter Says 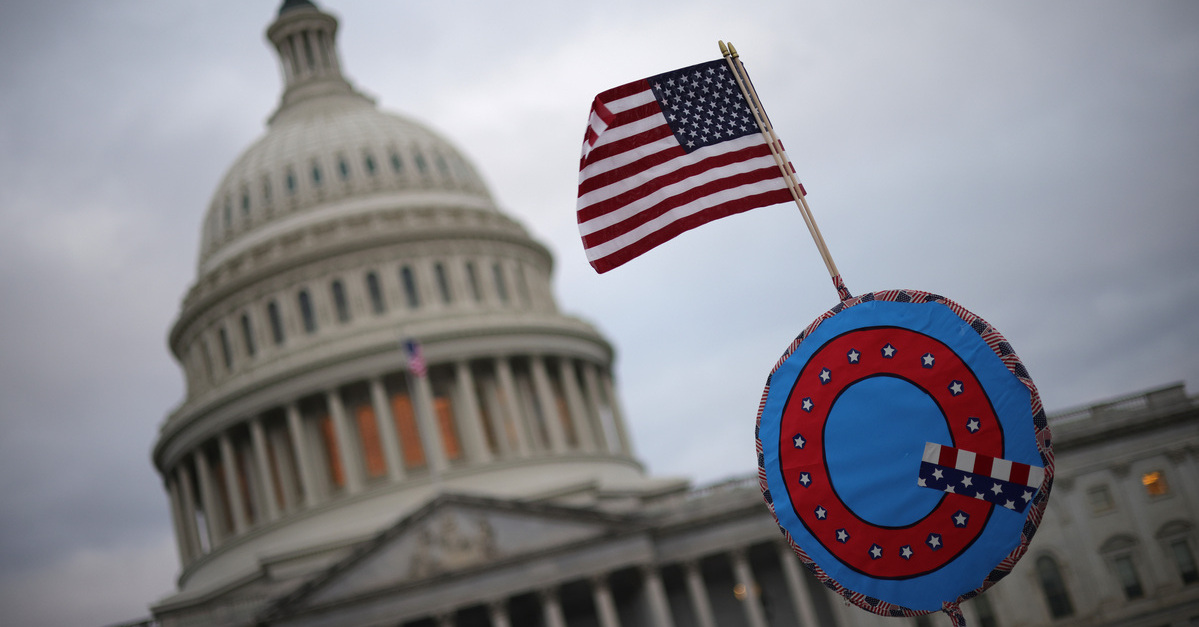 Supporters of U.S. President Donald Trump fly a U.S. flag with a symbol from the group QAnon as they gather outside the U.S. Capitol January 06, 2021 in Washington, DC.

A Michigan man and QAnon adherent went so deep into conspiracy theory that he eventually murdered his wife, killed the family dog, and severely wounded his older daughter before being killed by police, according to the man’s younger daughter.

Igor Lanis, 53, killed his wife, 56-year-old Tina Lanis, by shooting her at least four times with a shotgun early Sunday morning, according to the Oakland County Sheriff’s Office.

A 911 call was received at 4:11 a.m., Sheriff Michael Bouchard said, according to The Detroit News, during which a young woman said her father had shot and killed her mother. Describing that call as “chilling,” the sheriff noted the panicked woman could only provide the name of her street. In comments to the paper, 21-year-old Rebecca Lanis identified the caller as her 25-year-old sister Rachel Lanis.

According to a Facebook post by the OCSO, sheriff’s deputies and officers from the Walled Lake Police Department arrived at the residence after triangulating the area of the call five minutes later.

A gunshot was heard in the area and law enforcement then began to make their move into the residence, the post says.

“The suspect, later identified as Igor Lanis a 53-year-old male, exited out of the front door of the address, presented a Remington 870 pump action shotgun, and fired on officers,” the OCSO said. “The Walled Lake Police officer as well as an Oakland County Sheriff Deputy returned fire striking the suspect fatally wounding him.”

After Igor Lanis was killed, the sheriff’s office said, the suspect’s elder daughter was seen trying to crawl out of the front door of the house.

“They dragged her to safety,” the OCSO said. “She stated that her dad shot her and her mother. She was transported to an area hospital and rushed into emergency surgery. She was initially listed in critical condition however after surgery has been upgraded to stable.”

The names of the victims were not released by law enforcement, rather, Rebecca Lanis shared them with the Detroit News.

According to the Detroit Free Press, police are investigation, but have yet to float an official motive for the weekend tragedy.

In comments to various media outlets, the younger Lanis blamed her father’s mental state on the pro-Donald Trump conspiracy theory.

RELATED: California Man Allegedly Admitted Killing His Kids with a Spear Gun in Mexico, Said He Was ‘Enlightened by QAnon,’ and Believed Young Victims Had ‘Serpent DNA’

“It’s really so shocking but it really can happen to anybody,” she told the paper. “Right-wing extremism is not funny, and people need to watch their relatives and if they have guns, they need to hide them or report them or something because this is out of control.”

In a verified public post on the Reddit forum “r/QAnonCasualties,” the unscathed family member goes into detail about the late obsession with the right-wing political conspiracy theory.

“Yep,” she writes. “The internet ruined him. Growing up, my parents were extremely loving and happy people. I always had a special bond with both my parents. In 2020 after Trump lost, my dad started going down the Q rabbit hole. He kept reading conspiracy theories about the stolen election, Trump, vaccines, etc. He always said he wanted to keep us safe and healthy.”

The post then goes into detail about the shooting:

Well, at around 4 AM on September 11, he had an argument with my mother and he decided to take our guns and shoot her, my dog and my sister. My mother succumbed to her wounds and my sister is in the hospital right now.

My dad also fired back at the cops and they killed him.

I’m shocked and I don’t even know what to say.

The Detroit News reported that the above-referenced Reddit post was, in fact, written by Rachel Lanis. She said she only missed the attack due to the “dumb luck” of being at a friend’s house for a birthday.

“I think that he was always prone to (mental issues), but it really brought him down when he was reading all those weird things on the internet,” she went on to tell the paper, “Nobody could talk him out of them.”