New Restaurant Employee Shoots Co-Worker in Back of Head After Victim Wins Big at Nearby Casino: Authorities 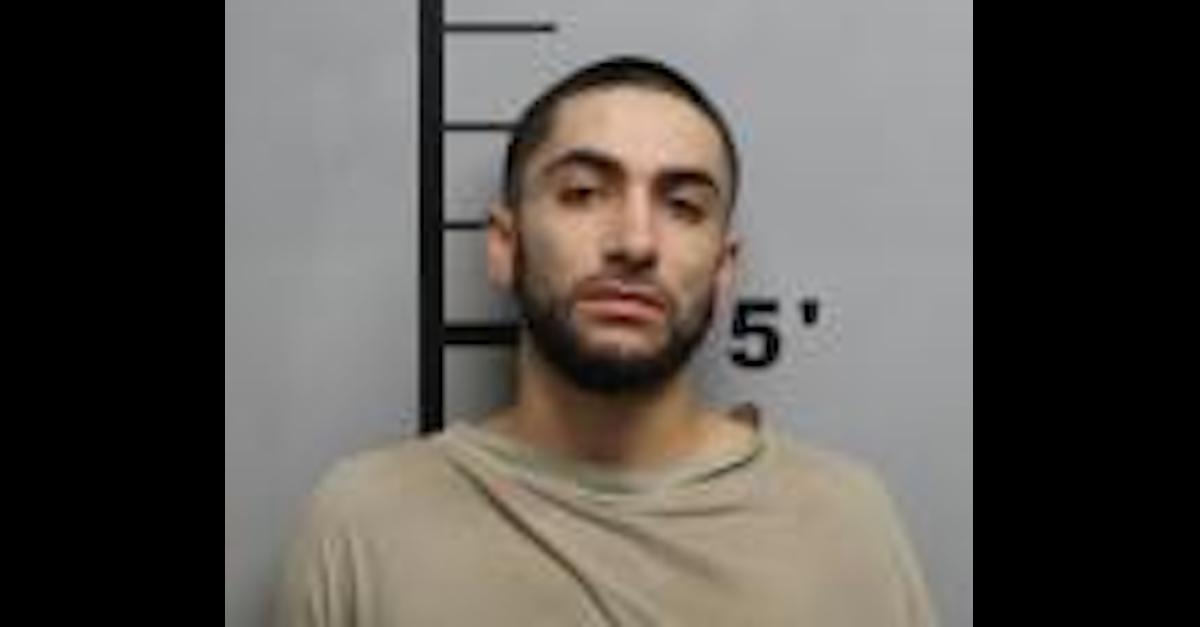 An Arkansas restaurant employee is accused of shooting a co-worker in the back of the head at work after the victim won big at a nearby casino.

According to the Gentry, Ark. Police Department, officers were called at 11:03 a.m. Wednesday to the La Huerta restaurant on Fowler Street to investigate a shooting.

“Dispatch advised the victim was an employee of the business and was in the kitchen area,” the police said on Facebook. “Dispatch also advised that the suspect had fled the scene in a black, or dark grey pickup.”

Officers arrived to find medical personnel already tending to a man subsequently identified as Fidel Mercado Reyes, 40, a cook at the eatery. The victim had “an apparent gunshot wound to the back of his head,” police said online.

According to court documents obtained by Law&Crime, when first responders arrived, the victim still had a pulse; medics took him by ambulance to the Siloam Springs Regional Hospital where he subsequently died a short time later.

A 9mm bullet casing and a bullet fragment were recovered from the scene.  Witnesses said the suspected shooter, Martin Eduardo Tavarez Torres, 21, recently of Bartlesville, Okla., was a newly hired cook at the restaurant.  Court records say the police determined that Tavarez Torres fled the scene in a dark gray 2004 Chevrolet extended cab pickup truck immediately after pulling the trigger.  He was wearing an apron, a white sweater, and a black hat, the documents revealed.

In a recording of the 911 call placed by restaurant manager, Yesenia Alaniz, she stated there was an accident in the kitchen and an employee had fallen and was bleeding from the head. Moments later someone can be heard in the background telling Yesenia in Spanish that the employee had been shot in the head. Dispatched asked Yesenia who shot him in the head, and she said, “it was the cook that just started yesterday.”

The caller gave a more thorough physical description of the suspect and said she didn’t know where he went.  A manhunt was launched.  The local police department and neighboring agencies “quickly initiated a cursory search of the immediate area, but did not locate the suspected shooter,” the police said. “Precautionary steps were taken by contacting a nearby daycare facility, as well as city hall and the local school district.”

Police then issued a B.O.L.O. (Be On the Look Out) bulletin for Tavarez Torres in the aforementioned vehicle bearing Oklahoma license plate #KPN-196. Based on the bullet and the casing left at the scene, they indicated he was likely carrying a 9mm handgun and warned citizens to call 911 without approaching the suspect directly.

Officers first suspected that Tavarez Torres may have been headed back to Bartlesville, Okla., but restaurant employees told them the suspect had a brother who lived in nearby Fayetteville, Ark., about 45 minutes southeast of Gentry.  According to court documents, police quickly ascertained that the suspect wasn’t at his brother’s house, but a 911 call from the suspect’s sister-in-law led the police to Tavarez Torres without considerable investigatory effort.  The sister-in-law told 911 dispatchers that the suspect parked “a little far” away from her home despite purporting to have come for an unexpected visit.  She said the suspect claimed he somehow became “lost,” was “acting weird,” and said he’d “been wanting to get rid of his car.”  The sister-in-law also told the authorities that Tavarez Torres indicated that he did not want his parents informed of his location.

Court documents say police arrested the suspect about four miles away from the sister-in-law’s house near the intersection of Krupa Drive and Martin Luther King, Jr. Boulevard in Fayetteville.

When officers returned to examine the suspect’s truck, they realized that its license plate had been removed, the same court documents indicate.  Relatives in Fayetteville subsequently told the authorities that the suspect confessed he had “pushed” a man during an “altercation” and that the man had died.  The suspect stashed a suitcase at his relatives’ home; authorities recovered it but did not explain its contents.  Relatives said the suspect claimed he needed to abandon his truck and to remove its license plates because its “former owner was angry at him” and “was threatening him.”

Tavarez Torres was returned to the Benton County Jail — the county which contains Gentry — after his arrest.  According to court papers, he refused to speak with officers when they attempted to interview him.

Additional investigation revealed that the suspect was the nephew of Erasmo Santillan, the restaurant’s owner. The suspect had stayed with the victim overnight immediately before the shooting; he was settling into the local area after having moved from neighboring Oklahoma.  He also is alleged to have ridden to work with the man he’s accused of shooting.

The court records indicate that the suspect had a previous run-in with authorities in Bartlesville earlier this year and that he had previously been in trouble for drunk driving, reckless driving, and for operating vehicles twice without a valid license.

The victim’s brother and sister-in-law told police that the incident likely involved a “winning slot machine ticket that Fidel [the victim] won at Cherokee Casino” in West Siloam Springs, Okla.  They explain the possible motive in this narrative contained within the court records:

That was the day of the shooting.  The ticket was never redeemed; the victim never enjoyed his apparent winnings.  The court documents continue:

Victor stated Fidel kept the winning ticket in his wallet and had his passport on him the day of Wednesday, November 10, 2021, so he could redeem it after work.

Victor and Marlenne [the victim’s sister-in-law] believed the ticket to be worth either $20,000 or $200,000 because the ticket stated it was worth approximately 200,000 credits.

Authorities say that the victim’s property at the hospital did not contain his wallet, his passport, or the winning ticket.  They later discovered the passport and the pink winning ticket in the victim’s jacket, which had been left behind at the restaurant.

Lourdes Cisernos, an employee at the restaurant whose name appears to be spelled various ways in the record, later told investigators that the suspected shooter was acting “weird” even before the gunshot rang out.  She said “she heard what sounded like an explosion in the kitchen.”  She said she “nearly ran into” the suspect as he frantically exited the premises, but at the time she thought he was running to an electrical box, not because he was trying to flee from an alleged crime.  Others present subsequently exclaimed that the victim had been shot; she said she also then “saw Reyes lying on the floor.”

Felipe Portillo, another employee, told the police that the suspect went to the bathroom for a bizarre “15 to 20 minutes” before the shooting occurred.  Here’s how the police recounted his version of the events:

Martin [the suspect] appeared to be hot and went towards the back door. Felipe [the witness] began to eat and was on the phone. Felipe stated Fidel [the victim] was to his right. He then felt the presence of someone walking behind him and then heard a bang. He then looked down to his left and saw Fidel laying on the ground but no one else was around. Loudres then came in and asked what happened. Felipe asked for someone to call an ambulance and told Loudres not to come into the kitchen. Felipe said he grabbed a white towel and attempted to apply pressure to Fidel’s wound and then put a white towel over his face.

According to jail records reviewed by Law&Crime, Tavarez-Torres is accused of first-degree battery, aggravated assault, and capital murder or attempted capital murder. No bond amount has been set.

Fort Smith, Ark. CBS affiliate KFSM said one of the victim’s brothers recalled him as “a really good person.”

“We talked about our childhood, our present, our future, our past, all of our fond memories,” said Victor Mercado Reyes. “We didn’t expect this was going to happen.”

“I just want justice for my brother,” Fernando Mercado Reyes told the television station. “He doesn’t deserve to die that way, I mean, any way.”

A GoFundMe is helping raise money for the victim’s funeral. It says the victim’s twin boys are each twelve years old.

The local police chief echoed the sentiments of the brothers.

“On behalf of the Gentry Police Department, I want to first express my deepest sympathy to the family of the victim,” the chief of police said on Facebook. “This was such a senseless tragedy. We are sorry for your loss. Your family will be in our thoughts and prayers.”

The chief thanked law enforcement agencies in Bentonville, Highfill, Decatur, Gravette, Centerton, and Fayetteville for their assistance with the case.

The Northwest Arkansas Democrat-Gazette said the defendant is due back in court on Dec. 17.